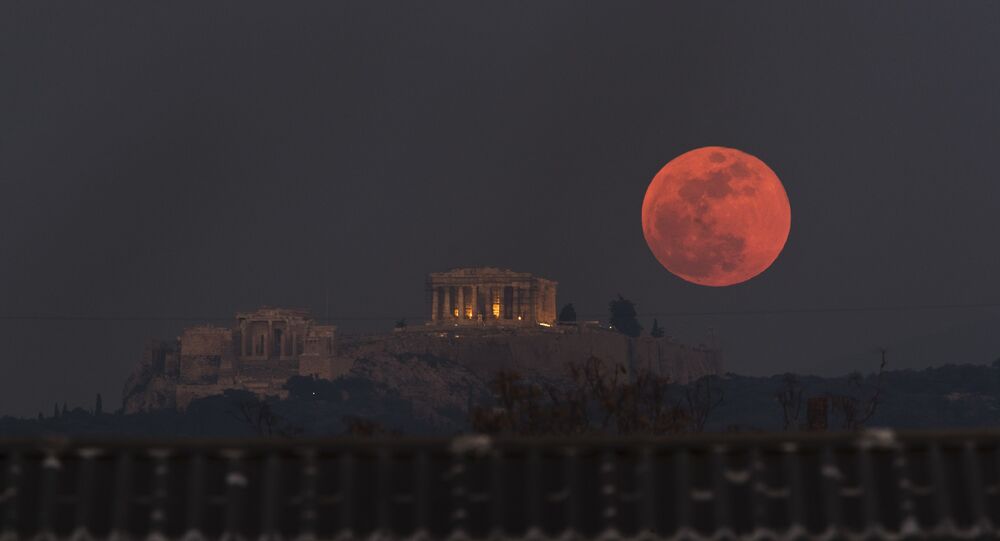 Internet users around the globe are eagerly awaiting the blood moon, wiping the dust off their brooms and preparing to ride above their towns.

In a thrilling astronomical phenomenon, the longest lunar eclipse of this century will coincide with Mars' closest approach to the Earth in 15 years. Unfortunately for residents of the US, Canada and Mexico, the "blood moon", so-called because of the reddish tinge the moon features when fully eclipsed, won't be visible in North America. However, it will light up the sky in Asia, Africa, Australia, and parts of Europe and South America. The total phase of the "blood moon" eclipse will last 1 hour and 43 minutes.

The full moon turning red is associated with a handful of superstitions. There's a popular belief, for instance, that the eclipse has a spiritual meaning as it boosts people's sensitivity and feelings. Others believe that it empowers werewolves and similar esoteric creatures around the world.

Many ancient cultures associate the "blood moon" with evil. The Inca people believed that the deep red color was caused by a jaguar attacking and eating the satellite. Many people in India cover food and water and perform cleansing rituals, as they say a lunar eclipse brings bad luck.

The natural phenomenon prompted scaremongers to remind us that judgement day is coming soon.

As we await the Blood Moon eclipse, some warm that the end of the world is near. Here is a medieval reminder of the signs of the Apocalypse
[Bodleian Douce 134, 16th c.] pic.twitter.com/9zEO5i39qo

Ready for ascension. No more fighting myself.

Just the right setting for a zombie apocalypse.

For some, the blood moon is a perfect time for all kinds of sorcery and magic covens, black cats and other familiars included.

Anybody doing anything special for the #BloodMoon tonight? I feel like I want to find high ground to fully experience it and perform a little ritual of some sort.#ForteanFriday #FolkloreThursday #witchytipoftheday #witchcraft #WitchLit pic.twitter.com/ikCnJBD1q8

The #BloodMoon is nigh and I feel an overpowering urge to convene a coven.

In Romania it was believed a #BloodMoon was caused by wolf-demon vampires known as Varcolaci. While in a deep sleep these demons sent out their spirits to attach to threads that were being spun at midnight, & climbed up to eat the moon & cover it with blood. #FolkloreThursday pic.twitter.com/oDTHLe60AA

There'll always be skeptics rolling their eyes amid the hype, though.

What's the nuts going to claim this time. Last time end of the world, why not lower taxes,,, LOL

I’m really looking forward to seeing all the poor quality iPhone pics of the blood moon on Facebook from 5:30am tomorrow.

Unfortunately, I fear there will be a fair amount of cussing at clouds.

I’m off to find a reddish coloured potato that I can photograph. #bloodmoon #moon pic.twitter.com/pO0lUhZ7nW