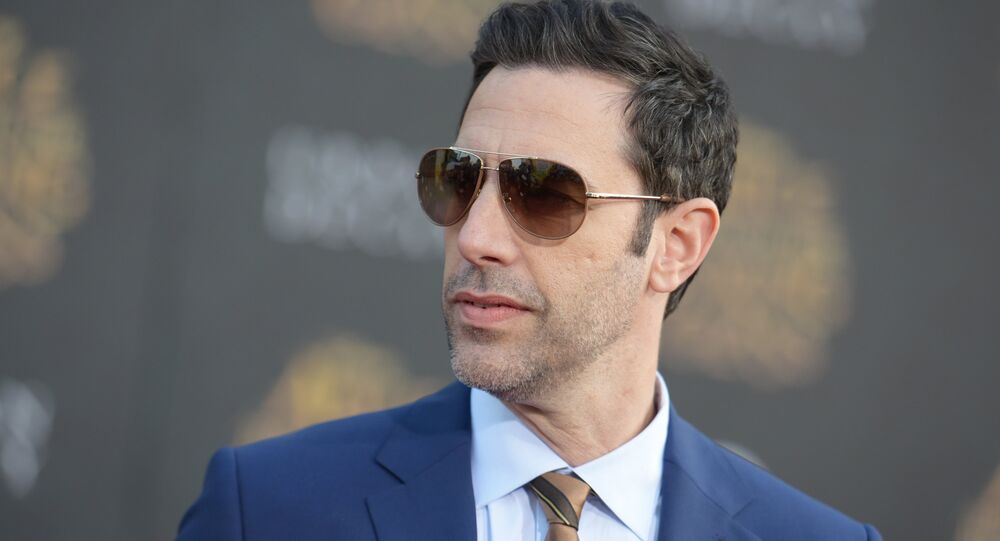 On Independence Day, Borat star Sacha Baron Cohen gave his followers an inkling that he was coming back to the screen when he released a somewhat provocative video featuring President Donald Trump, which social media users perceived as a teaser for his new show.

The provocateur and comedian has indeed returned to the screen with a new seven-episode mockumentary “Who is America?” on US cable channel Showtime – and it’s already making waves.

READ MORE: ‘Ya Got Me Sacha’: Sarah Palin Claims ‘Evil’ Comedian ‘Duped’ Her Into Interview

The prankster took aim at a number of Trump-era politicians, as he took on a new fictional character – Dr. Billy Wayne Ruddick, a conspiracy theory enthusiast, who is also the founder of a fake right-wing news site, Truthbrary.org, and whose sole purpose is to take down the “mainstreme [sic] media.”

Starring as another fictional character, Erran Morad, a tough Israeli anti-terrorism expert, rooting for the “Kinderguardians” program, Baron Cohen managed to get a number of politicians to voice their support for arming kindergarten kids.

Sacha Baron Cohen has outdone himself with "Who is America?"

The Wiz Kalifa part made me snort. pic.twitter.com/XLE7EeARxO

In addition to Ruddick and Morad, Cohen also took on two other characters, including freed criminal Ricky Sherman and Dr. Nira Cain-N’Degeocello, a Trump supporter.

How Did Those Duped React?

In a Facebook post, Palin dismissed Cohen as “evil, exploitative” and “sick” after he posed as a “disabled US Veteran” in a “fake wheelchair” to get the interview with the former Republican vice-presidential candidate.

Cohen struck back in his casual semi-sarcastic, semi-mocking manner from Ruddick’s parody Twitter account, labeling her remarks as “Fake news” and demanding an apology from Palin:

Republican Roy Moore, who has had quite a year after being accused of sexual misconduct by multiple women, also admitted to having been deceived by Cohen.

Upon realizing that the interviewer was in fact a comedian, Moore lashed out at Cohen, accusing him of “trickery, deception and dishonesty” and claimed that the new show sought to “embarrass, humiliate and mock.”

But not all of those tricked were offended by Cohen’s antics: ex-Congressman Joe Walsh laughed at being “got” by the prankster.

What can I say Bradley? @SachaBaronCohen got me. Do I believe kindergarteners should be armed? Hell no.

But, it's on me. Sacha fooled me good. Flew me out to DC for some made up friend of Israel award. I gotta live with it. https://t.co/r4juubOG9l

“Who is America?” has been the talk of the internet ever since the Ali G Show star teased it with a cryptic message from Trump on Independence Day and footage of ex-Vice President Dick Cheney agreeing to sign a waterboard kit.

Many fellow celebrities congratulated Cohen on the premiere:

congratulations to @SachaBaronCohen for reminding us (hilariously) of how very very very stupid we are. That was just great. #WhoIsAmerica @Showtime

I’ve seen every episode of this wonderful and horrifying show and I recommend you watch it as well. https://t.co/DIOz46Ytlj

SAW #WhoIsAmerica LAST NITE AND IT IS BEYONDDDDDDDDD. SO FUNNY AND SO DARK AND HAS INSANE DEPTH. PPL SHOWING WHO THEY TRULY ARE. AMAZING @SHOwhoisAmerica See it tonight

You have to watch this show! It’s the best comedy of the year with incredible social commentary! @Showtime #whoisamerica pic.twitter.com/QweX4TtfB8

Former Congressman David Jolly suggested that those who were duped into the interview with Cohen should be banned from access to classified data:

Going out on a limb here, but probably safe to say — any elected official who was duped to appear in the new @SachaBaronCohen series #WhoIsAmerica on @Showtime should be permanently disqualified from ever receiving classified information.

Meanwhile, Twitterians have largely praised the “insane episode,” with many saying that Cohen has outdone himself:

#WhoisAmerica is a fiercely funny reminder that comedy is a powerful form of activism. My goodness. I need time to process what I just witnessed.

Holy hell #WhoIsAmerica. What an insane episode. Sacha Baron Cohen is the best….Please get these republican freaks out of congress and away from any type of influence on this country

Others said that Cohen didn’t trick anyone into supporting the program, he just laid out the idea, and those politicians were quick to pick it up:

Sacha Baron Cohen didn't "dupe" anyone in #WhoIsAmerica He merely put an insane idea in front of bought-and-paid-for NRA shills. They considered it only through the prism of the NRA, then responded the way they knew the NRA would want them to respond. Period.

Terrifying how easy it was to get these politicians to agree with arming preschoolers #WhoIsAmerica https://t.co/WyAVGbd0dd

Fellow netizens emphasized that Cohen had raised the very relevant issue of gun violence and disinformation in the country:

#WhoIsAmerica is an interesting watch.@SachaBaronCohen brilliantly displays our issues of gun violence, divisiveness, and misinformation in this country.

Maybe someday we will train the next generation of kindergardians…

#whoisamerica reveals the soullessness of many of our representatives. They will literally say anything. This show through characters reveals more truth than any cable news outlet https://t.co/IXYDJolQAU

Watch as they mindlessly recite the script placed in front of them without any regard for reason whatsoever. How many @NRA scripts have they read in the exact same way?

Truly exposes the INSANITY of the gun lobby.

This is from @SachaBaronCohen’s new show on @showtime: Who is America? pic.twitter.com/tusfOEaryt

I just watched a few episodes and it is equally hilarious and disturbing. Really holds up a mirror to the current state of our country and it ain’t pretty. But it is really funny. https://t.co/htCxDILxPv

There were, however, those, who suggested boycotting the cable channel Showtime for promoting Cohen, who “impersonated [a] disabled military veteran”:

Impersonating disabled military veterans to score interviews is despicable. Did you do it for your own profit or his?

Cohen is a disgrace. Full boycott of showtime and cbs for allowing this piece of shit impersonate and commit stolen valor in the name of making fun of idiot politicians. Its a shame when @CBS allows people to take advantage of our vets for viewers. #boycottshowtime #boycottCBS

Shame on you for promoting this POS as a wounded veteran. The families of the wounded are not amused. #BoycottShowtime

In the meantime, Cohen is promo-ing his show via Ruddick’s fictional Twitter account, in a way trolling the claims made by the politicians that appeared in the mockumentary:

Forced myself to watch sad, irrelephant Sasha Cohens’ show WHO IS AMERICA, which i was DUPED into apearing. Garbage, apart from Patriot who slipped this clip past #fakenews Showtime sensors. Finally a solution to bad guys with guns! https://t.co/XFuHYplma3 #boycottSashacohen

Baron Cohen is known for provocative PR stunts: in 2006, he sported a bright green “mankini” while promoting his movie “Borat: Cultural Learnings of America for Make Benefit Glorious Nation of Kazakhstan.” In 2012, Cohen, dressed as his character from “The Dictator,” turned up at Cannes Film Festival with a camel and two model bodyguards.