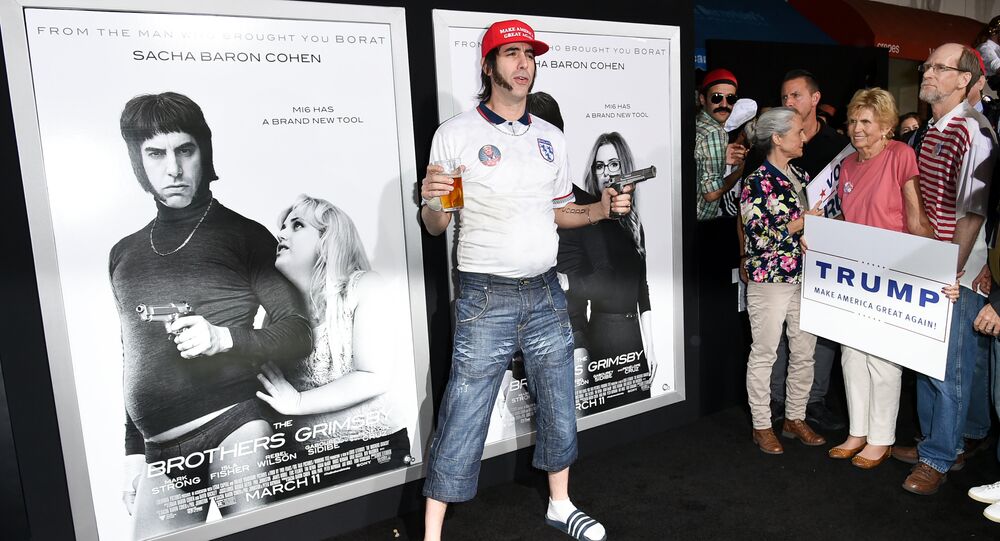 Years ago Donald Trump walked out of an interview with Sacha Baron Cohen for his Da Ali G Show, the Borat star is apparently preparing for a grand return to the big screen by taking aim at the current occupant of the Oval office.

Baron Cohen has tweeted a somewhat cryptic video message, featuring POTUS, with the caption “A message from your President @realDonaldTrump on Independence Day.”

In the clip, Trump appears to be referring to the comedian as a “third-rate character,” saying he wished that Cohen “would’ve been punched in the face so many times.”

“This third-rate character named Sacha Baron Cohen, I only wish that he would’ve been punched in the face so many times. Right now, he’d be in a hospital. It was disgraceful. He ought to be fired immediately. Sacha Baron Cohen, go to school! Learn about being funny. You don’t know a sh*t,” Trump is shown saying.

A message from your President @realDonaldTrump on Independence Day pic.twitter.com/O2PwZqO0cs

Instagram screengrab
Happy Independence Day, America! Here’s Your Viral End-of-Trump Countdown Clock
The 37-second clip has largely been perceived as a teaser for his new project, as the comedian seemed to respond to the president’s comment, with the line “He’s back. As you’ve never seen him before. Sacha graduates. Soon,” appearing on the screen followed by the logo for now-defunct Trump University.

The footage is said to include selected parts of a video Trump originally uploaded in response to one of Cohen’s stunts – in 2012 the comedian dressed as his fictional character from the movie, The Dictator, had thrown “ashes” on host Ryan Seacrest at the Oscars.

Social media users remain divided on the suspected preview: while many, including Baywatch star Pamela Anderson, tweeted that they were looking forward to his “clever come back:

I can’t wait for this… all in good fun on Sacha’s part… but the other seems sinister, cruel and over reactive.
definately demands a clever come back. I’m sure that’s exactly what’s coming.

…and said that Trump should go “buy some humor”:

Trump needs to go to the bank — and buy some humor.

Others defended the president, dismissing Cohen as another comedian who is trying to get his fifteen minutes of fame “by jumping on the anti-Trump bandwagon”:

These comedians should be paying Trump a percentage. There are hundreds of comedians who's careers were completely over and are now riding the anti-Trump wave just for some easy checks.
All you "comedians" should be thanking him. He's the reason you all have any work.#Trump2020

Another "celebrity" trying to regain their 15 minutes of fame by jumping on the anti Trump bandwagon. Sad really. They need to realize that their time is past and they need to move on.

The spat between the two started fifteen years ago as pre-POTUS Trump was featured in the comedian’s satiric Da Ali G Show, where Cohen would interview unwitting celebrities. Speaking with the billionaire, Cohen aka Ali G tried to have Trump invest in “ice cream gloves.”

After the then Apprentice star realized the interview was a prank, he walked out of the show. In 2012, he tweeted his impressions about the 2003 encounter with Baron Cohen:

I never fall for scams. I am the only person who immediately walked out of my ‘Ali G’ interview

During an appearance on The Late Late Show with James Corden in 2016, Baron Cohen brought up the long-forgotten interview, saying he was the “first person to realize he [Trump] was a d*ck.”

Baron also targeted Donald Trump in his 2016 movie “The Brothers Grimsby,” in which the president accidentally contracts HIV. Cohen then arrived at the film’s premiere sporting a “Make America Great Again” hat accompanied by a group of men brandishing “Vote Trump” signs.