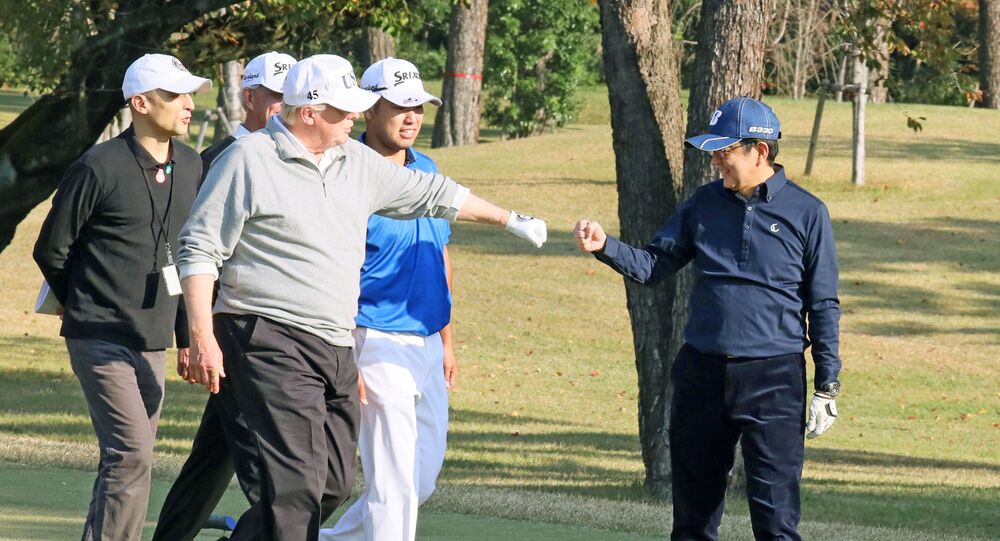 People from around the world have been keeping track of the US president’s recent stay in Japan, expecting something unpredictable to happen; however, it was his Japanese counterpart who appeared to steal the spotlight from him.

During his two-day visit in Japan, Donald Trump joined Japanese Prime Minister Shinzo Abe and professional golfer Hideki Matsuyama for an informal round of golf at the Kasumi Country Club on Sunday. Meanwhile, TV Tokyo was recording from above each of their movements on the course, including the very moment Abe lost balance and tumbled into the bunker when he tried to jump out of it.

While playing golf with President Trump, the Prime Minister of Japan took a tumble after trying to get out of a bunker… https://t.co/RmNtwZDb8J (📽️: @umekichkun) pic.twitter.com/ynDZobhaDn

​Several aides quickly rushed to his assistance, but the 63-year-old prime minister had already got back up on his feet with no signs of injury. As for Trump, he appeared to walk away blissfully unaware of Abe's fall, as he had turned his back exactly when his counterpart lost his balance and rolled backwards off the grass.

The aerial footage of was widely shared on Japanese social networks, with countless comments from amused users, such as "I'm surprised at how nimble he is," "He's practicing for the Tokyo Olympics opening ceremony" and "I've been playing golf for 40 years and I've never seen anyone do this!"