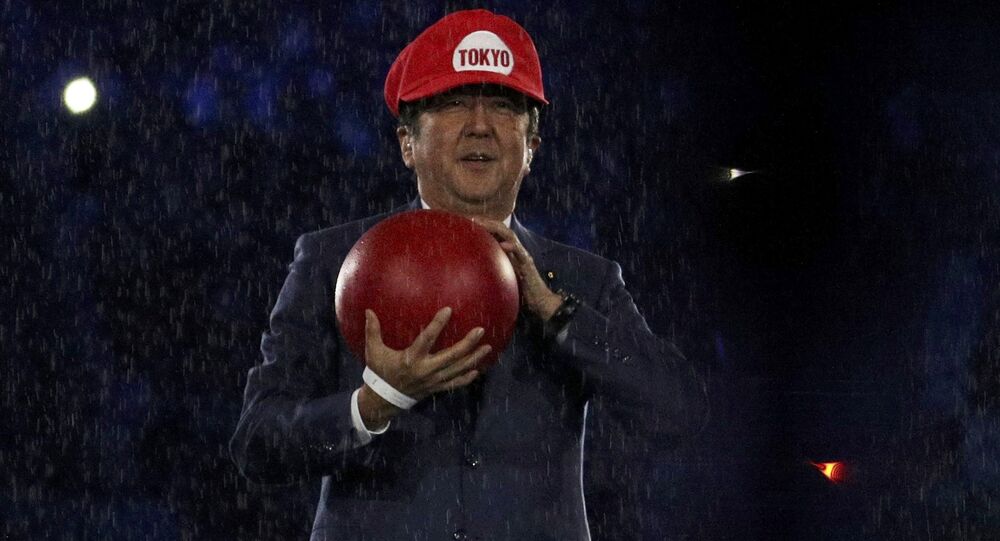 Japan's Prime Minister Shinzo Abe did not set any world records at the Rio Olympics, but he nonetheless became a sensation after his surprise appearance during the Closing Ceremony of the Rio Olympics, disguised as a fictional hero of the computer game Super Mario.

© Sputnik / Konstantin Salomatin
Tokyo Confirms Russia-Japan Peace Treaty Talks in Moscow - Foreign Ministry
It was "cosplay" on an international scale as the politician popped out from a stylized green pipe, just as the real Super Mario would have done. He was holding a red ball, and on his head the prime minister wore a recognizable red cap with the word "Tokyo" written on it. This was the way Shinzo Abe took the symbolic torch from Rio de Janeiro, as the next Summer Olympic Games will be held in Tokyo in 2020.

Social media users were happy to comment on this event. Someone admired the sense of humor of the Japanese prime minister, and some even called his showing up "the best appearance of the prime minister at Rio."

​The Prime Minister of Japan decided to surprise the audience for a reason: Mario is one of Japan's most iconic images, famous all over the world. Abe was right on target, expert on Japan Victor Pavlyatenko told Sputnik in an interview:

"As a politician, Shinzo Abe is very flexible; he is paying attention to many issues of public life, including sport. And from this point of view, it seems to me that his original appearance in public in Rio is a deliberate move that will no doubt be very useful and effective for the promotion of the future Olympic Games in Tokyo."

© AFP 2020 / CARL DE SOUZA
The Finishing Line: Rio Olympics End in Stylish Closing Ceremony (VIDEO)
"Abe's act indicates that he is doing everything possible to promote Japan's image in the international arena, both through tourism and sport. In this sense, Abe in Mario's disguise is another nice step in this direction, which is very clear to the international community, young people in particular. It must mobilize the nation to show the international community the best of Japan," Pavlyatenko explained.

"There is no doubt that Japan will bring its "A" game in preparation for the Olympic Games in Tokyo. At the Rio Olympics, the Japanese athletes were not bad as well and even created quite a sensation: they won medals in those competitions, where no one had planned to see Japan on the podium. It shows the great changes and successes in the Japanese sport. And I think that the Japanese will make every effort to show the best results at their home Olympics in 2020," the expert added.

It is worth noting that the Japanese Prime minister likes to set challenging goals and follow them, despite many obstacles. For example, Abe planned and, indeed, attended the Opening Ceremony of the Olympic Games in Sochi. It was an achievement, as he arrived to Sochi in spite of the insistent recommendations of Washington not to do so, notes Victor Pavlyatenko:

"Abe came to Sochi not only to attend the Olympics. For the Japanese prime minister, it is important to use every opportunity to establish personal contact with President Putin. And the meeting in Sochi represented a very advantageous situation for him as a politician. Improving their communications could make both leaders trust each other in solving the main problem between the two countries, the territorial one. The stakes were high; Abe placed his bet, and he won."

Owing to the existing personal relationship of trust, Putin and Abe have met 13 times already. It is noteworthy that one of the last meetings in June 2016 was held in Sochi again. Perhaps, their record of personal encounters will only improve.

New Power Bridge Could Bring Russia and Japan Together