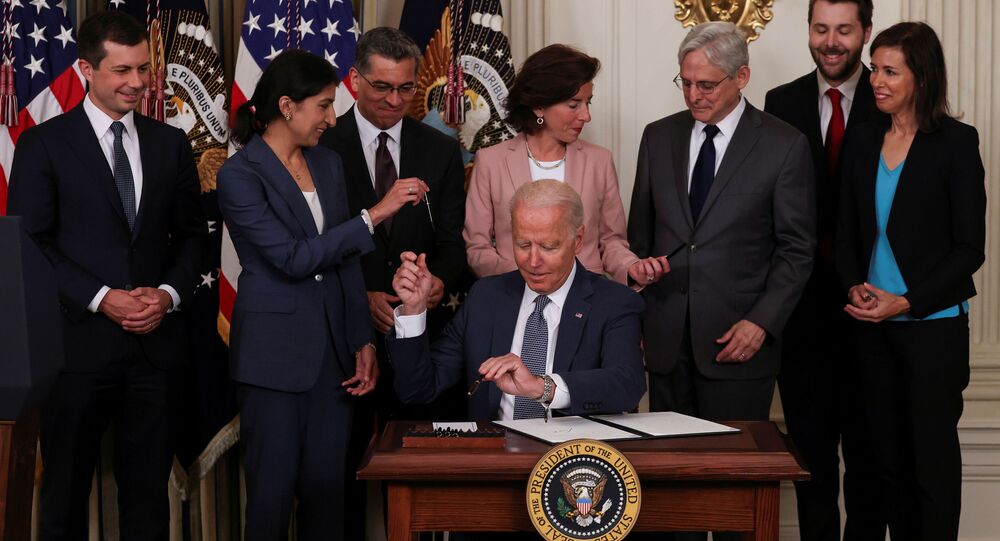 WASHINGTON (Sputnik) - US President Joe Biden has launched a war against the lack of competition in American industry, rolling out 72 actions to mitigate the crisis which the White House said was accelerating inflation in an economy rebounding from the coronavirus pandemic.

“In over 75 percent of US industries, a smaller number of large companies now control more of the business than they did twenty years ago,” the White House said in a statement, citing sectors such as healthcare, financial services and agriculture. “That lack of competition drives up prices for consumers.”

Monopolies with a few large players have led to tripling mark-ups in prices that force families to pay more for necessities such as prescription drugs, hearing aids and internet service, the White House said.

Barriers to competition were also driving down wages for workers, which have fallen by some 17 percent in some cases due to industry consolidation, it said.

“When there are only a few employers in town, workers have less opportunity to bargain for a higher wage and to demand dignity and respect in the workplace. Tens of millions of Americans—including those working in construction and retail—are required to sign non-compete agreements as a condition of getting a job, which makes it harder for them to switch to better-paying options,” the White House said.

Higher prices and lower wages caused by lack of competition are now estimated to cost the median American household $5,000 per year, it added.

The 72 initiatives which Biden will be signing into an executive order later on Friday will include a mandate for more than a dozen federal agencies to promptly tackle some of the most pressing competition problems across the economy, the White House said.

Among other things, they will make it easier for workers to change jobs and raise wages by banning or limiting non-compete agreements that currently affect some 36 to 60 million workers.

Prescription drug prices will also be lowered through state and tribal programs that will import safe and cheaper drugs from Canada and hearing aids will be sold over the counter at drug stores,

© REUTERS / KEVIN LAMARQUE
Biden Says US Economy 'On the Move' After New Jobs Data Revealed for June
Early termination fees on internet bills will be abolished, along with landlord exclusivity arrangements that stick tenants with only a single internet option.

Biden’s executive order also calls on the Department of Justice and Federal Trade Commission to enforce the antitrust laws vigorously and recognize that the law allowed them to contest prior anti-competitive mergers that past administrations did not previously challenge.

For broader effect, a White House Competition Council, led by the Director of the National Economic Council, will be formed to monitor progress on finalizing the initiatives in the executive order and to coordinate the federal government’s response to the rising power of large corporations in the economy.

Commodity-fueled inflation has become a hot-button issue in the United States since the vaccine breakthroughs for COVID-19 in November unleashed price rallies for most raw materials amid forecasts for rapid economic recovery from the pandemic. Constraints in supply chains seeing explosive demand after months of lax activity have added to the upward price pressure in most commodities.

Half of US Citizens Approve Biden’s Job as President, Poll Shows