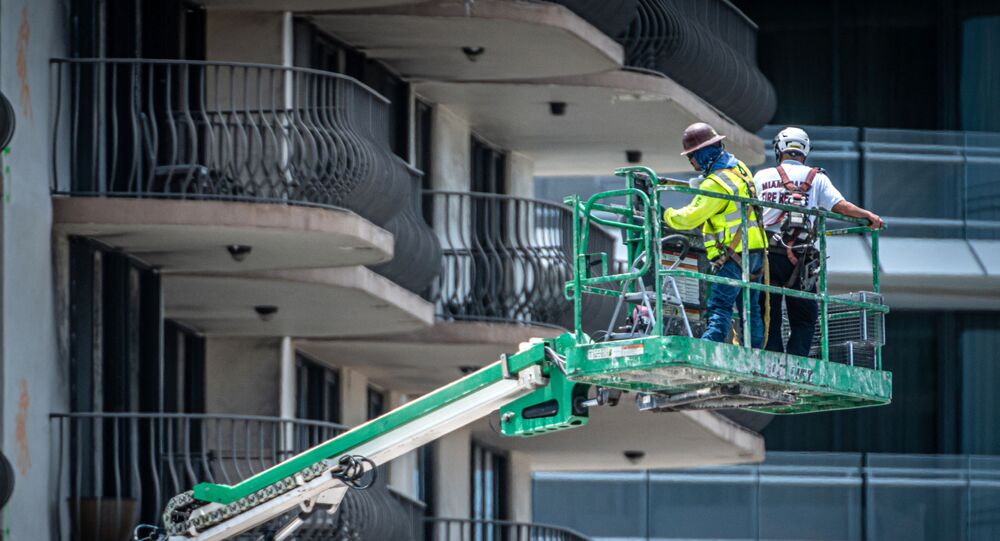 SURFSIDE (Sputnik), Liudmila Chernova - The search-and-rescue operation in the US city of Surfside, Florida, where a multi-story condominium building collapsed more than a week ago, may last for weeks and maybe months, Vice Mayor Tina Paul told Sputnik.

"In my opinion, there's more to this story than just the building collapse because of poor maintenance or poor construction," Paul stated. "We hired structural engineering firm to evaluate it, they're heading the investigation as to what happened and how this happened. They evaluated the other two buildings were perceived to possibly have issues. A lot of it comes down to the maintenance of your building policies and how it was built, how well it’s been kept... We're under the threat of sea-level rise. So, when you live in a condo on the beach, you know that you're going to have to take extra care of the building."

Paul pointed out, however, that this does not mean that the building was only having maintenance issues, as there are other factors being investigated.

"Because you had a massive construction project right next to their property," she told Sputnik, "There's also somebody who's been sending me maps of the area from 1920's and it's possible that that structure was built on an inlet that was still there. So, there are many other factors that could be factors in the work that was performed there that contributed to this collapse. To find out what really happened, we have to look at everything. And it doesn't make all the other buildings vulnerable."

Paul said that they hired a firm that does satellite infrastructure monitoring.

"They're also trying to look at and they're working in coordination with the Italian space agency," she said. "We're trying to see what we can find out from the satellite interception monitoring to see if we can pinpoint if there are other vulnerable buildings."

With regard to how long an investigation could take, Paul said, "I really don't know."

She noted that she is looking at all the information people send her regarding the collapse and, if it's relevant, she forwards it to the engineers.

"You have to look at everything," she stated. "There was a report presented to me from the historic preservation community that directly ties in the construction that happened in the building next door to them to the weakening of this foundation. They have made a direct tie in their report. So, our engineer has to evaluate the report. I saw the report. I think it's valid. And so, I forwarded that because, again, they have to look at everything."

There are other issues they are looking at too, Paul said.

"It was a full moon that night, a strawberry full moon, so you have to look at the tidal waves to see how the water was moving," she told Sputnik. "There's so many elements to this. I think when we do get the answers, it's going to be more than one cause. And they may have one underlying cause that, you know, but it's like a domino effect."

According to US media reports, the partially collapsed building is likely going to be demolished on Sunday. Miami-Dade County authorities said the search-and-rescue operation in Surfside was put on hold at 4 p.m. local time (20:00 GMT) on Saturday.

"When you look at the site and based on what you see it’s definitely weeks, possibly months," Paul told Sputnik, commenting on the possible span of rescue efforts. "I hope we can do this to get everything that we can. That maybe the families can get some of the possessions back or just to find everybody, so they can have some level of closure. I want everyone to be found. Just for their loved ones, for the relatives. Even if it's just them, for the community, because the community wants everyone to be accounted for."

Are There Any Other Concerns?

At the moment, there are no buildings near the collapsed multi-story condominium in Surfside, Florida, that cause immediate concerns; although many have hired structural engineers amid the tragedy, the vice mayor asserted.

When asked how many buildings currently have immediate safety concerns and what will happen with people who would have to be evacuated, Paul said, "I don't know if we have to evacuate people from the buildings just yet."

"I don't think so. Not in Surfside," Paul added, saying that they had checked a so-called sister building of the collapsed condominium. "They call them sister buildings. So, they had the same name and maybe it was the same architect. I just found out that one of the buildings was not built in the same year. Our structural engineer did go and evaluated the garage level of the buildings because we had complaints about the garage. The concrete was chipped, significant big chips. That doesn't mean the building's going to collapse. It means you have to look at what's going on and fix it."

Paul pointed out that a lot of the nearby buildings have hired structural engineers.

"They're looking at their building to see how well-kept it is to make sure that they get their repairs done because there were a lot of repairs needed at that [collapsed] building," she said. "They waited too long to get it done and it was overwhelmingly expensive. But as far as the neighboring buildings, each building, it's going to make sure their structures are safe."

The vice mayor told Sputnik that they want to get geo testing of the ground underneath the buildings.

"As far as the geo testing of the ground, I believe it's an infrastructure issue," Paul said. "Because it’s every single building, I don't believe that it's the buildings’ responsibility if they were allowed to [be] built there. I think it's infrastructure."

And in that respect, Paul believes that there needs to be a federal government system.

"Because it's not just our area. The other areas have to look at their ground and their structures," she told Sputnik. "They should be looking at the structures now and making sure to maintain them. And, certainly, if we find anything in the satellites, we'll be sure to share whatever our findings are, because I know it matters to everyone else living on the coast."

The survivors of the Champlain Towers South residential building collapse in Surfside, Florida, want to stay in town despite the tragedy, Paul noted.

"I was looking into that for some of the survivors I had met. And the issue will be finding the housing in this, where the 33154 zip codes and these three small municipalities, and I have to say Surfside is their favorite," Paul said. "So, they're looking to stay in the area. They’ve lived here. They like it, so to send them to another area, it's complicated."

Paul said that the survivors are getting help at the Surfside community center, including food and services.

"Then, the Red Cross came and FEMA [Federal Emergency Management Agency] came and we put the survivors into the hotels and their family members have come in. So, the Red Cross and FEMA are very good at helping with a lot of that," she told Sputnik.

The vice mayor said that families with children need to stay close to their schools.

"And we have several synagogues here. It's important for them to have the synagogues," she said. "I'm going to be speaking with some of the realtors to see how we can coordinate the housing to keep the families here. They want to stay here."

© REUTERS / MARCO BELLO
Photos and flowers hang in a fence at a memorial site created by neighbors in front of a partially collapsed residential building as the emergency crews continue search and rescue operations for survivors, in Surfside, near Miami Beach, Florida, U.S. June 29, 2021

Blumstein mentioned a resource center nearby where all the families can go to get social security cards, driver's licenses, phones, gift cards, and other essential things.

On Thursday, US President Joe Biden said that the US federal emergency agency would provide temporary housing for survivors, in addition to expediting visas for relatives.

"The support of President Biden coming to us means a lot, especially to the families. I was not there [for the meeting] but I heard he spent three hours with the victims’ families and the survivors," Paul told Sputnik commenting on Biden's visit to Surfside. "He spent time talking to each one. He met with the police chief and the officers who were on the ground when this tragedy happened. And he met with several of the first responder teams. I think it's very important."

Paul told Sputnik that Biden also offered support to cover some of the costs.

"I hope he'll stay on and help us further because I think that we can be the model city for the rest of the country and beyond, because the changes needed in how buildings are regulated, how they're cared for," she said.

The tragedy in Surfside occurred on June 24, when the 12-story Champlain Towers South residential building partially collapsed. The death toll in the incident stands at 24, while more than 120 people are still missing.