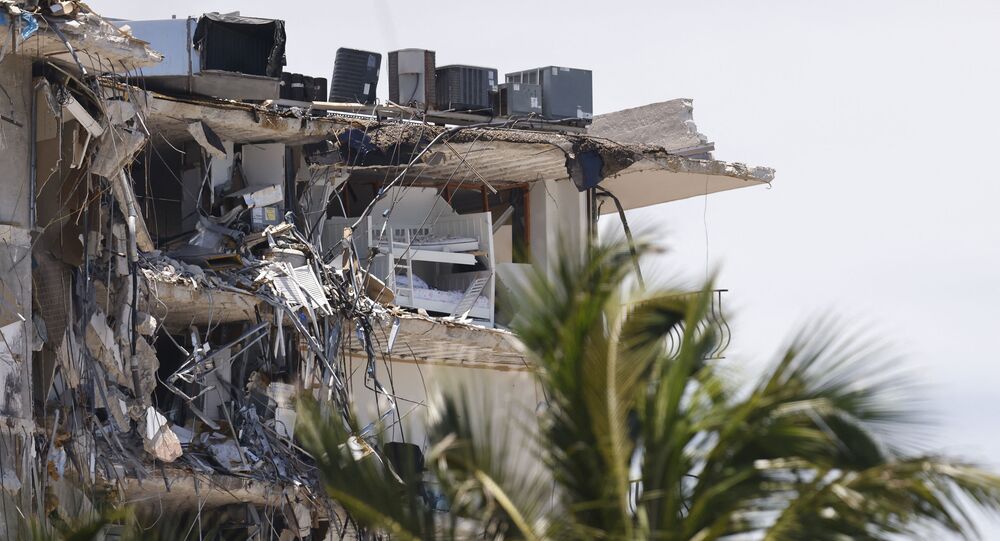 The June wreckage of the Champlain Towers South condominium complex in Surfside, Florida, shocked not only the state but the entire US, with the tragedy claiming at least 24 lives and leaving 124 people unaccounted for.

Engineers who visited the site of the Surfside town condo collapse or reviewed photos of debris have determined a possible reason behind the wreckage, The New York Times reported on Saturday.

According to specialists, critical sections near the base of the building appear to not have been steel reinforced in the amount required by the project’s original design drawings.

“The bars might not be arranged like the original drawings call for,” Allyn E. Kilsheimer, a forensic engineering expert, told The NYT.

Kilsheimer confirmed that there are "signs that the amount of steel used to connect concrete slabs below a parking deck to the building’s vertical columns might be less than what the project’s initial plans specified".

The engineer noted, however, that additional examination is required to confirm whether the slab-to-column connections indeed contained less steel.

R. Shankar Nair, a member of the National Academy of Engineering, noted "inconsistencies" between the initial design and sections of steel remaining visible in the columns.

“There does not appear to be enough steel connecting the slab to the columns,” Nair said. “What we see out there seems inconsistent with what the drawings show.”

Other engineers quoted by the outlet argue that a lack of steel could be one factor that impacted the collapse, and not the main reason. The investigation of the tragedy and its causes is ongoing, and findings and interpretations can change, the report noted.