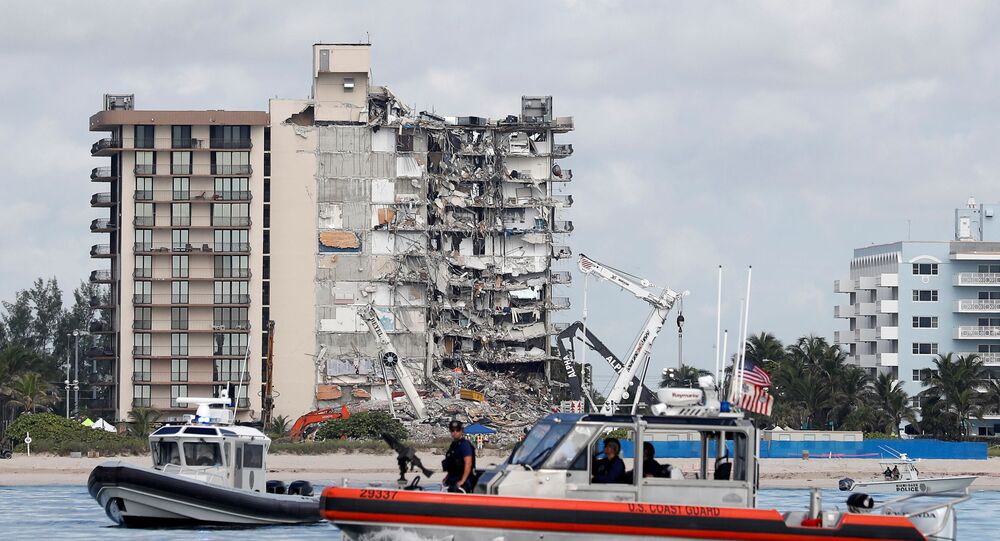 The death toll of the Surfside condo building collapse rose to 22 people on Friday, with 126 people remaining unaccounted for. The collapse took place earlier last week, prompting an extensive rescue operation and causing, as US President Joe Biden put it, the whole nation to mourn.

The city of North Miami Beach in Florida on Friday ordered an evacuation of a condominium that was deemed unsafe after an inspection report found structural flaws in the building.

Crestview Towers building has been ordered to be evacuated by North Miami Beach Building Department, with the inspection suggesting that it is "structurally and electrically unsafe". The evacuation order comes just days after the deadly collapse of a condo in the neighbouring Surfside.

"There has been no collapse and no one has been injured – this is a precautionary measure based on their inspection report", a city spokesperson said, cited by Fox News.

According to the authorities, the Crestview Towers building was inspected in January, and it submitted a recertification report after North Miami Beach ordered a review of all condo high-rise buildings above five stories following the Surfside collapse.

"In an abundance of caution, the city ordered the building closed immediately and the residents evacuated for their protection, while a full structural assessment is conducted," North Miami Beach City Manager Arthur Sorey III stated. "Nothing is more important than the safety and lives of our residents, and we will not rest until we ensure this building is 100% safe."

The now evacuated building, according to the officials, was built in 1972 - nine years before Champlain Towers, which suffered a collapse on 24 June, claiming at least 22 lives, with 126 still unaccounted for. US President Joe Biden on Thursday visited the site of the tragic incident, offering condolences to everyone affected and pledging federal aid for the survivors and members of their families.