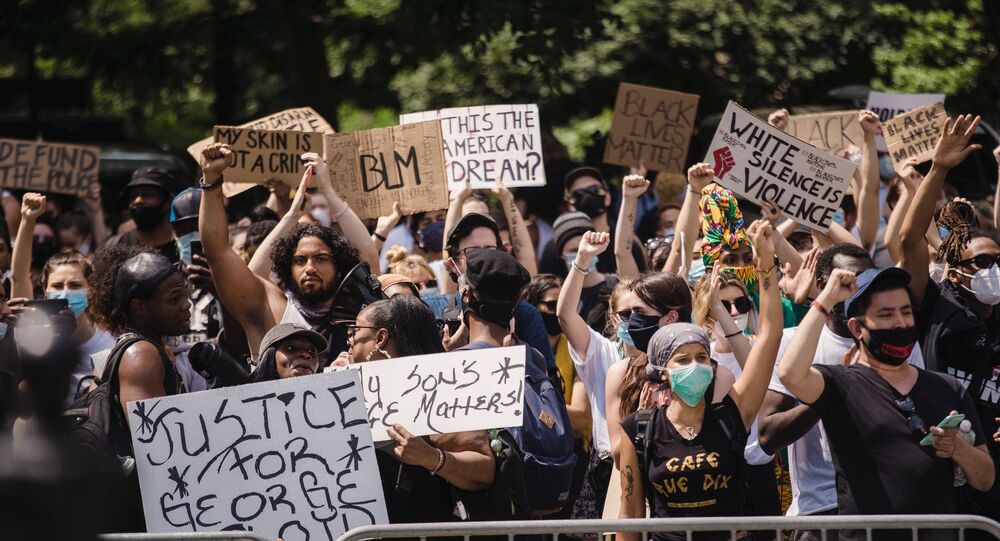 In a trial that lasted over a month, on 20 April former Minneapolis Police Officer Derek Chauvin was charged with second-degree unintentional murder, third-degree murder and second-degree manslaughter in the death of African-American man George Floyd on 25 May 2020.

Jurors assigned to the trial of former police officer Derek Chauvin declared him guilty on Tuesday of all charges stemming from the in-custody May 2020 death of African-American Minnesota resident George Floyd, wrapping up almost three weeks’ worth of witness and expert testimony.

Chauvin, who has pleaded not guilty to all charges and faces dozens of years behind bars, is expected to receive his sentencing in June.

Central to the case was the most relevant piece of evidence: the videotape of Floyd’s death of asphyxiation in a Minneapolis street while being held in a prone position with Chauvin kneeling on his neck for nine minutes and 29 seconds.

Weighing in on the verdict in the trial, Fox News’ Tucker Carlson said that the footage documenting Floyd's arrest had become the centrepiece of a new political movement, and allowed political actors to “harness” the emotions over the video to “control the country and change it forever”.

​In an opinion piece for Fox News, adapted from his opening commentary on the 21 April edition of "Tucker Carlson Tonight", the host of the political talk show claimed that in the last month, some of these people had worked to influence the outcome of Derek Chauvin’s trial.

Carlson deplored the fact that this had been allowed to happen, as no matter how one might feel about a specific case, all civilised countries have impartial justice systems.

Firstly, jury intimidation should never be tolerated, underscored the commentator. However, in the case of Derek Chauvin, he said, the threat of violence had been wielded to influence the outcome of the trial.

Candace Owens: "This was not a fair trial. No person can say this was a fair trial." pic.twitter.com/kDvu14OVFK

​At this point, he deplored the fact that President Joe Biden threw his backing behind Chauvin’s prosecution while the jury was still deliberating the case.

In the hours before the jury convicted the ex-cop, President Biden had said:

“I’m praying the verdict is the right verdict, which is — I think it’s overwhelming in my view.”

Defenders of Biden’s comments have since emphasised that the jury was sequestered at the time, while they were deliberating the verdict.

“When was the last time a sitting president weighed in on a jury decision before it was made? Answer: never,” said Carlson.

Furthermore, the trial had proceeded against the backdrop of fresh protests erupting in Minneapolis over the fatal shooting of Daunte Wright, a 20-year old African American, by a now-fired police officer in Minnesota's Brooklyn Center on 11 April.

© REUTERS / TWITTER/GRAVEMORGAN
A demonstrator confronts a police officers during clashes, following the fatal police shooting of 20-year-old Black man Daunte Wright in Minnesota, April 12, 2021 in this still image obtained from a social media video on April 13, 2021.

As the events gathered steam, Democratic Congresswoman Maxine Waters visited Brooklyn Center on 17 April, urging protesters to "stay in the street" and become "more confrontational" if Chauvin was acquitted of killing Floyd.

Rep. Maxine Waters calls for rioters to "stay in the street" and "fight for justice" against police unless Chauvin is declared guilty for murder, not just manslaughter.

"We got to get more confrontational. We got to make sure they know we mean business." pic.twitter.com/YVdV8QHfUM

"I hope we're going to get a verdict that will say guilty, guilty, guilty, [in the Chauvin trial]. And if we don't, we cannot go away", Waters had said to journalists later, triggering a storm of criticism from Republican counterparts in the House of Representatives.

Another sign of jury intimidation was mentioned by Tucker Carlson – the incident when the former Santa Rosa home of Barry Brodd, who testified as a defence witness in the Chauvin trial was subjected to vandalism. A severed pig's head was dumped on the house's front porch.

​A large hand statue in front of the Santa Rosa Plaza mall was vandalised with a similar substance. The suspects also left a sign with a picture of a pig and the words "Oink Oink" near the statue.

The thugs, says Carlson, got away with all of this, with the authorities seemingly showing little interest in apprehending the culprits.

The glaring manifestation of how mobs try to influence a trial, underscored the political commentator, should shock and horrify people just as much as the George Floyd video, as this is a testimony to how fast America is moving backwards.

However, the verdict made most give a sigh of relief, according to Carlson, as they had watched the 3,000 Minnesota National Guard personnel being deployed to maintain order.

US media reported earlier that the Biden administration had considered deploying National Guard units in all fifty states in the event of mass unrest following the trail's outcome.

Accordingly, a conviction, whether justified or not, was seen as “buying the country peace”, writes Carlson.
Americans, he says, opted to “pay the ransom” in the wake of months of “mostly unrestrained violence” and intimidation from Black Lives Matter (BLM), the movement that has spearheaded protests against racial injustice and police brutality in the wake of Floyd’s death.

Furthermore, Derek Chauvin was marked to be sacrificed for the sins of the American nation — its history, culture, and system, believes Carlson.

While pointing out that no one had shown during the trial that race or skin color had played any role in the death of George Floyd, the Fox News host, political actors now intend to “use” the trial, and its verdict, just as they used George Floyd.

Carlson quotes the statements made by the US President and the Vice-President after the jury announced the verdict.

“No one should be above the law. And today's verdict sends that message. But it's not enough. We can't stop here,” said Joe Biden.

"It was a murder in the full light of day, and it ripped the blinders off for the whole world to see"

US President Joe Biden reacts to the conviction of Derek Chauvin for the murder of George Floyd https://t.co/GXjleq8spO pic.twitter.com/oAhogiO4hq

“A measure of justice isn't the same as equal justice. This verdict brings us a step closer and the fact is we still have work to do. We still must reform the system.”

Tucker Carlson warns that Derek Chauvin’s conviction was “not the end of the revolution”. He cites BLM activist Hawk Newsome as saying:

“It was a mixture of violent and nonviolent protest that yielded this result. That’s the bottom line. America doesn’t listen to us when we march peacefully. I’m not saying people will be back in the street but America must know that if you continue to allow us to be murdered in the streets without justice, we will raise hell in America.”

Looking ahead, observing how BLM activists, for example, celebrated the Chauvin verdict in New York. Carlson claimed “never-ending ethnic conflict” in a multi-ethnic nation is possibly what is ultimately sought by those seeking to take advantage of the outcome of the trial.

According to the political commentator, the latest developments show that “Radicalism works. Violence works. That’s the lesson. We have taught the mob that lesson.”