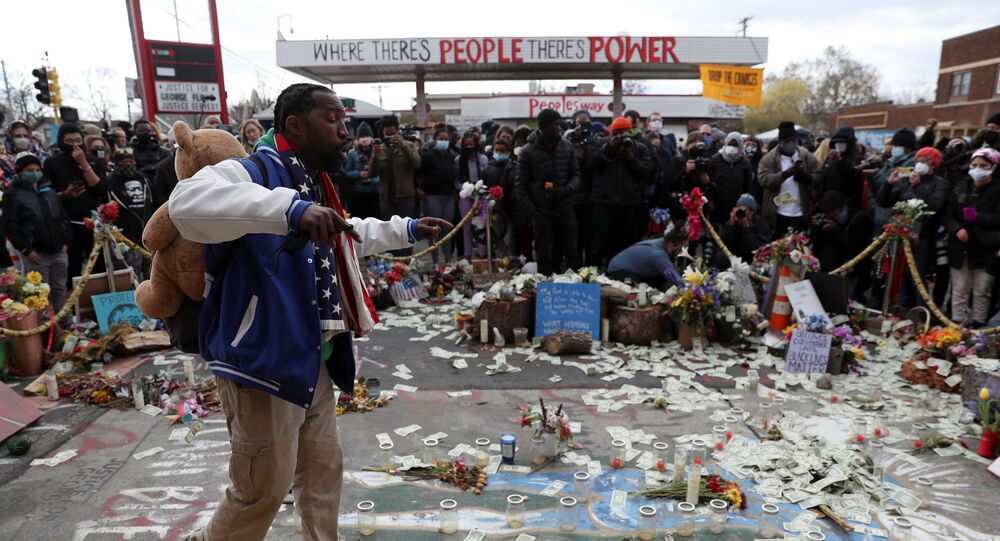 'In Particular': White People Given Special Instructions at the Entrance to George Floyd Square

The intersection of East 38th Street and Chicago Avenue in Minneapolis, Minnesota, where a black man, George Floyd, died while in the custody of white police last year, soon after the death of the 46-year-old became a memorial site under the name George Floyd Square.

White people wishing to visit George Floyd Square appeared to be instructed, before entering the protest site, on how they should behave, while staying at "A Sacred Space for Community, Public Grief and Protest', according to a photo of a sign said to be near the entrance to the square, a Fox News reporter tweeted.

The banner contains three inscriptions in bold, comprising general rules for those seeking entrance, calling on people to "enter with reverence, humility, and openness, as an invited guest"; "caring for each other by wearing a mask and asking others to wear a mask"; "honor the space as a place to connect and grieve as caring humans".

The list of ground rules for visitors to the square, however, appeared to contain an added sign in bold - "For White people in particular" - which then adds an extra sublist of instructions which are thought to be applied for white people.

According to the banner, white visitors should "decenter" and "come to listen, learn, mourn, and witness". The sign notes that white people come here "to support, not to be supported".

White people should be "mindful of whether your volume, pace, and movements are supporting or undermining your efforts to decenter yourself".

The banner reminds white people that they should not "take photos of other people without" the latter's consent.

"Consider if you want or need to take photos and post them", the banner reads.

Additionally, according to the added unofficial sign, white people are called to "engage rather than escalate, so that it can be a learning moment rather than a disruption."

White people about to enter George Floyd square are given special instructions pic.twitter.com/3gzpwqUmtS

According to the Fox News tweet, the banner was not the only one of its kind.

Reacting to the "Sacred Place" set of instructions, Twitter users divided mainly into those pointing out that the rules in the list were a common-sense code of conduct of conduct for any place regardless of race, and others who saw in the sign the return of segregation, while still others decided that the sign was a reminder of what had happened in that location and has nothing to do with segregation.

Sounds like kind advice for any place of significant historical tragedy. attitude should apply Ground Zero, battlefields, cemeteries, places of great speeches (I have a Dream etc. and tragic places (Dealy Plaza, USS Arizona, the balcony in Memphis... the Dakota.. too many more).

Sounds like some good advice for anybody (regardless of race) anywhere. Being kind and considerate is a nifty thing.

Nothing like trying to stir up more trouble! I can't imagine what would happen if any place had a sign posted with special instructions for black people.

I'm glad to see we're going back to the 1950's style of segregation.

You all don’t know that this neighborhood hood is diversified. Whites and blacks control the gates. White sand blacks are part of the community. This is a sign for peace and to keep this place sacred. Also whites in particular if you see harm being done to a black brother stand

The sign is addressed "for whites in particular" because we are unlikely to recognize the sacredness of the spot. It also applies to anyone else of any race who needs a reminder that the spot is sacred.

The sign is addressed "for whites in particular" because we are unlikely to recognize the sacredness of the spot. It also applies to anyone else of any race who needs a reminder that the spot is sacred.

On Tuesday, a 12-member jury in the trial of Derek Chauvin, a Minnesota police officer who was accused of killing George Floyd in May last year, reached a verdict, finding the former guilty of all of the charges against him. Floyd's killing occurred on 25 May 2020, as he was detained after allegedly using a fake banknote in a local shop.

The officer, Derek Chauvin, knelt on Chauvin's neck for around 10 minutes, which asphyxiated Floyd, who was later pronounced dead in hospital.

The killing sparked nationwide protests against police brutality and police racism that were in some cases characterized by extreme violence, with looting and vandalism of shops and federal buildings, and clashes with police.