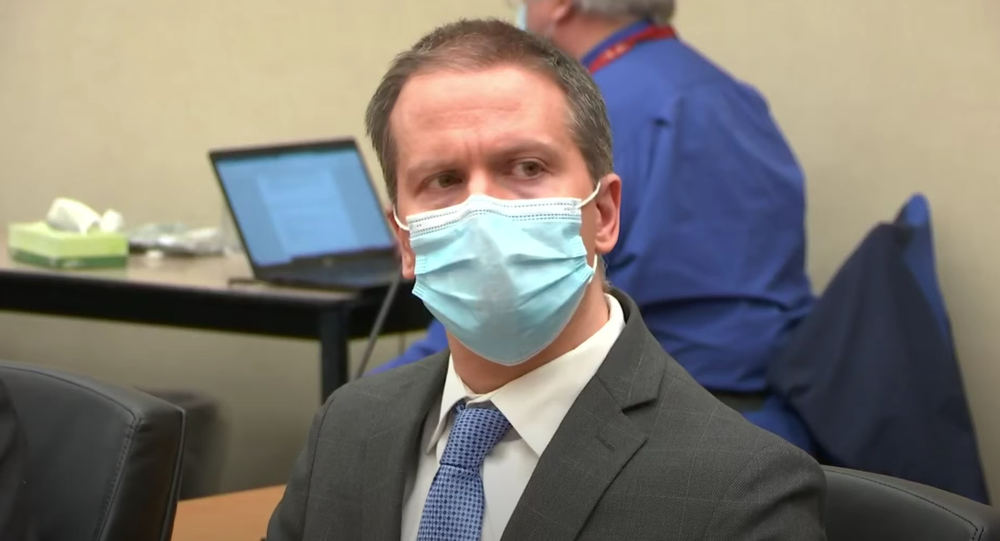 Former Minneapolis Police Officer Derek Chauvin has been charged with second-degree unintentional murder, third-degree murder and second-degree manslaughter in the death of Minnesota resident George Floyd on 25 May 2020. Chauvin is accused of placing his knee on Floyd’s neck although Floyd said he could not breathe.

Jurors assigned to the Chauvin trial declared on Tuesday that the former cop was guilty on all charges, bringing to a close three weeks’ worth of witness and expert testimony.

Charged with second-degree murder, Chauvin faces up to 40 years in prison on that offense alone. The third-degree murder and second-degree manslaughter carry maximum prison sentences of 25 years and 10 years, respectively. Chauvin has pleaded not guilty to all charges.

Hennepin County District Judge Peter Cahill has also revoked Chauvin's bail, after which he was handcuffed and led out of the courtroom.

Trial proceedings kicked off in late March after the case saw two jurors replaced after the $27 million settlement was offered to Floyd's family by the city of Minneapolis, Minnesota. At the time, jurors informed Judge Cahill that they could not disregard the hefty settlement and were unsure whether they could be impartial once the trial began.

Cahill had previously rejected efforts by the defense to change the location of the trial, ruling that there is no part of the North Star State in which residents have not been privy to the details of the fatal arrest.

The weeks’ worth of testimony saw occasionally emotional remarks from a number of witnesses and repeated views of video footage documenting Floyd's 25 May 2020, arrest. Some of the stand-out moments from the proceedings include Chauvin invoking his Fifth Amendment privilege, and a defence witness suggesting carbon monoxide poisoning contributed to Floyd’s death, since his face was near the tailpipe of a police car while pinned to the ground.

However, Floyd’s autopsy report indicates that he died of “cardiopulmonary arrest, complicating law enforcement subdual, restraint and neck compression.” During the trial, several witnesses also testified that Floyd died of asphyxia, which was not specifically mentioned in the medical examiner’s report.

In Monday’s closing arguments, Chauvin’s defense attorney Eric Nelson reiterated to members of the jury that his client’s use of force during the arrest was appropriate since he had seen Floyd being combative with a pair of officers who had initially responded to the scene.

Nelson claimed that the “state has failed to meet its burden of proof beyond a reasonable doubt,” emphasizing that prosecutors failed to consider the “totality of the circumstances,” as required by law.

"It says in that moment, at that point, nothing else that happened before should be taken into consideration by a reasonable police officer,” the defence attorney continued.

Nelson also took the opportunity to highlight Minneapolis Police Lt Johnny Mercil’s testimony, stating that the trainer acknowledged that placing a knee on an arrestee’s neck “can be utilised in certain circumstances” when an individual’s level of resistance is spiked.

Mercil did state during cross examination that Chauvin’s filmed technique was not a proper neck restraint, underscoring that “we tell officers to stay away from the neck when possible, and if you’re going to use body weight to pin - to put it on their shoulder and be mindful of position.”

‘This Wasn’t Policing, This Was Murder,’ Prosecution Says Before Deliberation

In his last comments before jurors were set to begin their deliberations, Minnesota prosecutor Steve Schleicher argued that Chauvin should be convicted of Floyd’s death, stressing that the former officer acted cruelly and with indifference unbefitting of a policeman.

He later noted that the case “is exactly what you thought when you saw it first, when you saw that video,” adding “this wasn’t policing, this was murder,” and that “there’s no excuse” for Chauvin’s behavior during the fatal arrest.

Schleicher referenced the length of time that Chauvin held his knee on Floyd’s neck a total of 22 times during his closing arguments. The prosecutor used his time to summarise the prosecution’s evidence, alleging that Chauvin ultimately killed Floyd on purpose as he chose “pride over policing”.

Later, during the prosecution's rebuttal to the defense's closing arguments, prosecutor Jerry Blackwell turned to Nelson's remarks that Floyd died as a result of heart disease and illegal drug use instead of at the hands of Chauvin.

"You were told … that Mr Floyd died because his heart was too big,” Blackwell said. "The truth of the matter is that the reason George Floyd is dead is because Mr Chauvin’s heart was too small."

Other defendants connected with Floyd’s death include J Alexander Kueng, Thomas Lane and Tou Thao, who have all been charged with aiding and abetting murder and manslaughter. The three former officers are scheduled to be tried in August.