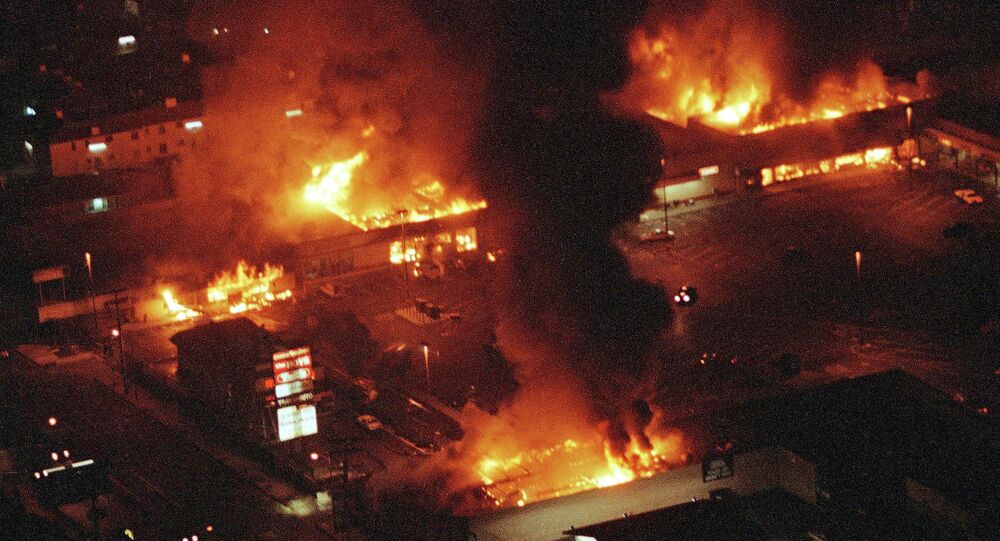 Thousands of National Guard troops and police from multiple states have been deployed in Minnesota as the state braces for the jury’s verdict in the trial of Derek Chauvin, the former Minneapolis police officer accused of killing George Floyd in May 2020. The nationwide protests which followed Floyd’s death caused 25 people to lose their lives.

Maxine Waters, the Democratic congresswoman from California facing growing pressure over her comments urging Black Lives Matter protesters to “get more confrontational” if Derek Chauvin is not convicted for “murder,” also partly defended the 1992 riots which swept across Los Angeles and killed 63 people in the aftermath of the acquittal of the police officers who beat Rodney King, unearthed footage reveals.

“There are scores of injuries, and still anger and frustration, and people who plan on staying on the streets, and expressing their outrage and anger in any way they deem necessary. There are those who would like for me and others and all of us to tell people to go inside, to be peaceful, that they have to accept the verdict. I accept the responsibility of asking people not to endanger their lives. I am not asking people not to be angry,” Waters said in a C-Span video dated 30 April, 1992, day two of the six days of riots which rocked the West Coast city that year.

She went on to call violent LA rioters’ motivations “somewhat understandable, if not acceptable,” and to defend some looting as a matter of urgency.

“There were mothers who took this as an opportunity to take some milk, to take some bread, to take some shoes. Maybe they shouldn’t have done it, but the atmosphere was such that they did it. They are not crooks,” she said in a separate interview with local media at the time.

“One lady said her children didn’t have any shoes. She just saw those shoes there, a chance for all of her children to have new shoes. Goddamn it! It was such a tear-jerker. I might have gone in and taken them for her myself,” Waters said.

Waters’ decades-old comments carry new potential significance amid the firestorm of controversy she has faced over her remarks Saturday urging protesters in Brooklyn Center – the city where 20-year-old African American Daunte Wright was gunned down by a white police officer last week, to ignore curfew, to “stay on the streets” and “get more confrontational” if Derek Chauvin, the former officer accused of killing George Floyd, is not convicted.

Waters’ comments prompted some Republicans to accuse her of inciting riots and violence in Minnesota, and demanding that she resign or be expelled from Congress.

Judge Peter Cahill, the judge presiding over the Chauvin trial, blasted Waters and other elected officials for their incessant commenting on the trial, saying he “wished” officials would “stop talking about this case, especially in a manner that’s disrespectful to the rule of law and to the judicial branch and our function.” Waters’ remarks could serve as potential grounds for an appeal by Chauvin’s defence if he is convicted, he added.