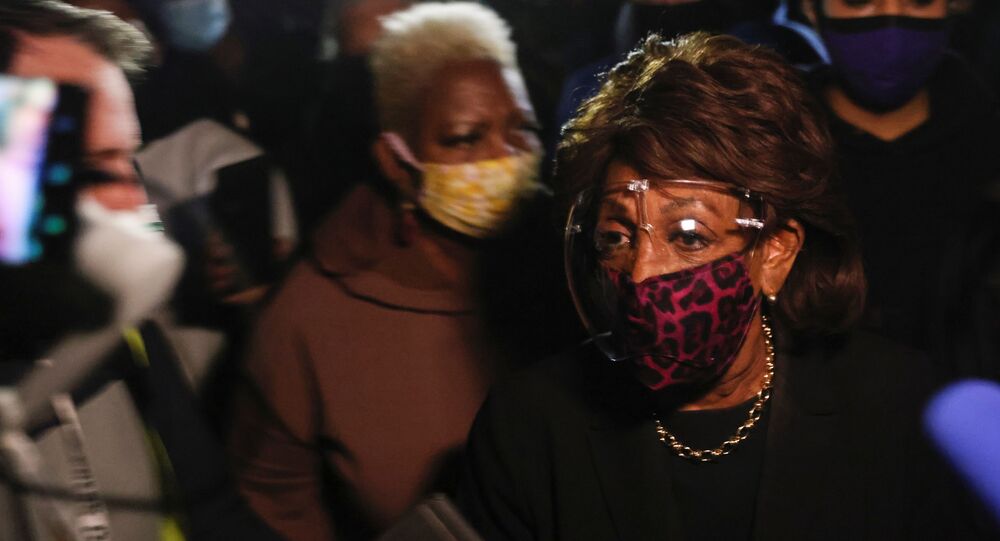 Earlier this year, Democrats pushed to convict former President Donald Trump on impeachment charges for purportedly inciting insurrection and violence at the US Capitol on 6 January. At the time, POTUS urged supporters to "peacefully protest" the election results and vowed to keep "fighting", claiming there was "voter fraud" in the 2020 election.

House Minority Leader Kevin McCarthy has said that the statements made by Democrat lawmaker Maxine Waters during her visit to Brooklyn Center, Minnesota on 17 April were aimed at "inciting violence" and urged House Speaker Nancy Pelosi to act on the matter.

Maxine Waters is inciting violence in Minneapolis — just as she has incited it in the past. If Speaker Pelosi doesn’t act against this dangerous rhetoric, I will bring action this week.

McCarthy's comments follow similar calls from another House Republican, Marjorie Taylor Greene, who said she was planning to introduce a resolution to expel Maxine Waters from Congress over her calls for Minnesota BLM protesters to defy the imposed curfew and remain on the streets. Waters also insisted that Derek Chauvin should be found guilty of "murder" of George Floyd (instead of "manslaughter"), and urged protesters to "get more confrontational" if he is not.

"As a sitting United States Congresswoman, Rep. Maxine Waters threatened a jury demanding a guilty verdict and threatened violence if Chauvin is found not guilty. This is also an abuse of power", Greene said.

Waters Urges Minnesotans to Protest While She Bails

Maxine Waters arrived in Brooklyn Center on 17 April and appeared at a BLM gathering against police violence just 30 minutes before a local emergency curfew went into effect. She gave a short, but emotional speech about how the curfew is the government's way of silencing people and how the protesters should defy it (thus also breaking the law).

Democrat Rep. Maxine Waters says she doesn't recognize the curfew and encourages people to break it and says she hopes the protests will continue. pic.twitter.com/nVpzX2yH6K

Despite her impassioned address, Waters did not stay with the BLM gathering, choosing to leave before the curfew began. A little over 100 protesters stayed after it went into effect, but eventually also dispersed without clashing with the police. However, not all of Minnesota's BLM gatherings during the last week have ended as peacefully – some descended into riots and confrontations with the police.

Maxine Waters is marching in Brooklyn Center tonight and told people to take to the streets if Chauvin is acquitted pic.twitter.com/RemfvCCLAn

The latest spate of protests was triggered by a high-profile killing of an African-Americans by a police officer in Brooklyn Center. Namely, 20-year-old Daunte Wright was killed in the city after being shot by a law enforcement offer during a traffic stop. Wright resisted arrest for an outstanding warrant and officer Kimberly Potter reached for her gun, fatally shooting him in the chest. Potter claims she wanted to use her Taser, but grabbed her handgun by mistake. She has since been charged with second-degree manslaughter and faces up to 10 years in prison if found guilty.