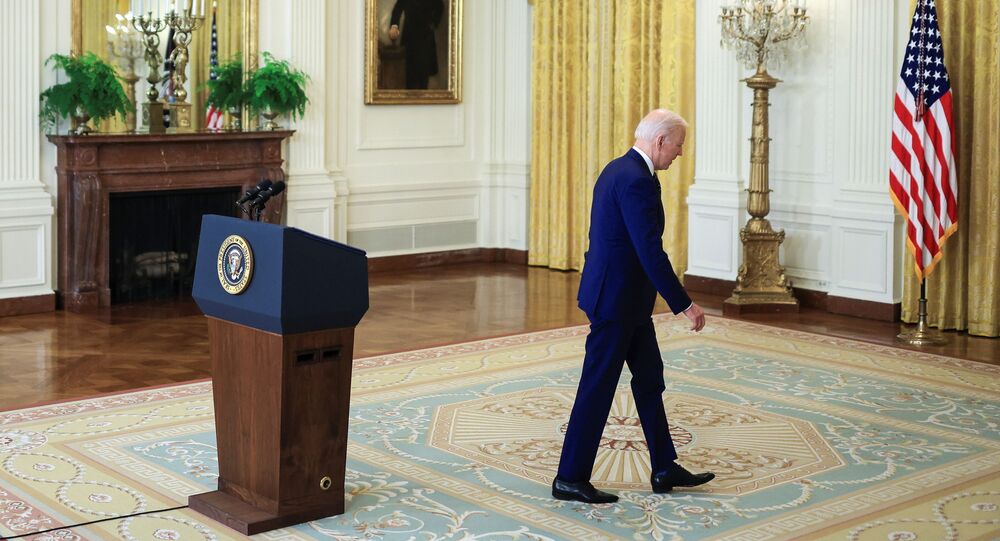 The city of Minneapolis, the state of Minnesota, and the United States as a whole are bracing for potential violence as Americans await the jury's verdict in the trial of Derek Chauvin, the former Minneapolis police officer accused of killing George Floyd.

President Joe Biden has commented on the imminent delivery of the verdict in the Chauvin trial, saying he was "praying" that the jury would reach the "right" decision, and that what George Floyd's family believes America needs more than anything at this moment is "peace and tranquility."

"I spent time with [George Floyd's] little daughter Gianna, she's this beautiful child, and his brother, both brothers, matter of fact. So I can only imagine the pressure and anxiety they're feeling," Biden said, speaking to reporters on Tuesday after talking with members of the Floyd family.

"They're a good family, and they're calling for peace and tranquility no matter what that verdict is. I'm praying the verdict is the right verdict, which is – I think it's overwhelming, in my view," the president added.

Biden made the comments after the jury in the Chauvin trial was sequestered (i.e. isolated from potential outside influences which could sway their opinions on the case). He previously joined other politicians in condemning Floyd's May 2020 death, but did not comment on the trial.

© REUTERS / Jane Rosenberg
George Floyd: Jury Deliberates Fate of Ex-Cop in Derek Chauvin Murder Trial
Judge Peter Cahill, the judge presiding over the Chauvin trial, previously slammed officials for commenting on the trial, saying he "wished" that "elected officials would stop talking about this case, especially in a manner that's disrespectful to the rule of law and to the judicial branch and our function."

Cahill made the comments after long-time California Democratic Congresswoman Maxine Waters urged supporters to "get more confrontational" if Chauvin wasn't convicted for murder. Such comments, he said, could serve as potential grounds for an appeal for Chauvin's defence.

Biden campaigned on ending systemic racism and violence in policing in 2020, but also dismissed more radical proposals by some Democrats to "defund the police" in response to the series of police killings of unarmed African American men accentuated by Floyd's death. He has also taken flak from some to his left and from Trump supporters for supporting the 1994 crime bill which led to a surge of incarcerations in the Black and Hispanic communities, predominantly for non-violent crimes, with detractors accusing him of hypocrisy. After spending years defending the crime bill, he finally acknowledged that supporting it was a "mistake" last October, just weeks before the 3 November election.

The Chauvin jury spent several hours deliberating on Monday after the prosecution and the defence made their closing arguments, and is continuing its deliberations Tuesday. If convicted, the former police officer could spend up to 40 years in jail. If all 12 jurors cannot agree to convict, a mistrial will be declared, with the state getting the opportunity to try him again at a later date.

© REUTERS / NICHOLAS PFOSI
Over 3,000 Minnesota National Guard Troops Called Up as State, Nation Brace for Chauvin Verdict
Footage of Chauvin leaning on Floyd's neck for nearly nine minutes while the man shouted "I can't breathe" sparked widespread protests, riots, and looting across America last year, with at least 25 people killed and over 14,000 arrested in the mayhem.

Authorities in Minneapolis, the state of Minnesota, and across the US have expressed fears that the delivery of the verdict could spark new protests, particularly if the jury deems Chauvin innocent of the charges against him. These fears have prompted law enforcement to beef up security considerably in the Twin Cities area and across the state, including the deployment of armoured vehicles and armed National Guard troops in Minneapolis.