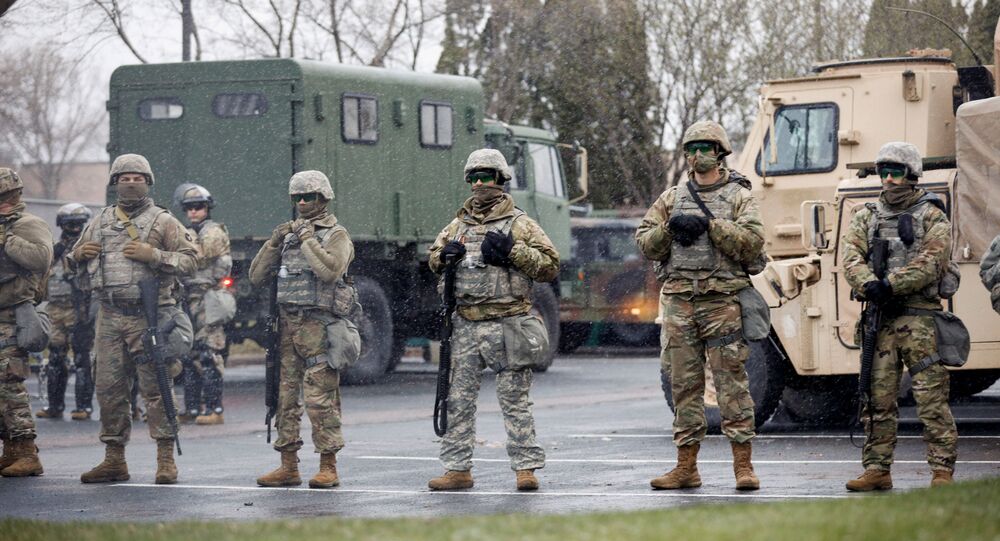 In Minnesota, tensions over the trial of Derek Chauvin, the former Minneapolis police officer accused of killing George Floyd, were exacerbated last week when another unarmed black man, 20-year-old Daunte Wright, was killed by police less than 20 km from the courthouse where Chauvin is being tried.

Over 3,000 Minnesota National Guard personnel have been activated to help maintain order as federal, state and local law enforcement braces for violence as America awaits the jury’s verdict in the Chauvin trial after the defence made its closing arguments on Monday, the state's government has confirmed.

The beefing up of active National Guard forces comes amid growing fears of violence between law enforcement and protesters. On Sunday morning, two Guard members were injured in Minneapolis in a drive-by shooting during a routine security patrol. One Guardsman was transferred to hospital for treatment of injuries sustained from shattered glass. The other was treated at the scene.

The Guard deployment falls under the auspices of ‘Operational Safety Net’, a joint effort by the Minneapolis Police Department, the Hennepin County Sheriff’s Office, the state of Minnesota and local representatives to ensure order and “bridge gaps between law enforcement and the community.”

Guard units are deployed in the Twin Cities area and across the state, particularly downtown areas and at the foot of federal and state government buildings, where they are joined by local police.

Along with Guard units, policing has also been beefed up. On Monday, Minnesota Governor Tim Walz requested additional security assistance from Ohio and Nebraska, with the request expected to include the deployment of state troopers from those states in built-up areas in Minnesota.

US media have reported that the Biden administration has considered deploying National Guard units in all fifty states in the event of mass unrest following the Chauvin verdict. Joe Biden is expected to give a televised address to the nation after a verdict is delivered.

The court building where Chauvin’s trial has taken place has had an armed National Guard presence since March, with a heavy police presence, barbed wire, concrete barriers and chain-link fences also observed. Tan-coloured armoured vehicles have been seen in recent weeks driving through the streets and parking outside boutique stores, liquor shops and grocers. Hundreds of stores have been boarded up by owners in anticipation of a repeat of the summer violence that followed the Floyd killing.

NOW - National Guard on the move in #Minneapolis.pic.twitter.com/Z7ITTw18yh

Tensions in Minneapolis, Minnesota generally and across the US were further escalated last week after a policewoman shot and killed an unarmed black man at point blank range as he attempted to speed away following a traffic stop, apparently confusing her pistol with a Taser. That event led to days of protests, with some degenerating into violent confrontations with police, and the looting of local big box stores.

© REUTERS / LEAH MILLIS
Members of the National Guard look on from behind a fence as a protester holds a placard outside the Brooklyn Center Police Department, days after Daunte Wright was shot and killed by a police officer, in Brooklyn Center, Minnesota, U.S. April 15, 2021

Minnesota’s National Guard force is known to possess over 13,000 reserve soldiers and airmen at its disposal. The Guard’s units including the 34th infantry division, which deployed in southern Iraq in the late 2000s, the 1st armoured brigade combat team, the 34th combat aviation brigade – which is equipped with UH-60 Black Hawk helicopters and Ch-47 Chinook choppers, as well as fixed wing-aircraft, an airlift wing, a fighter wing, and the 84th troop command – a specialized unit tasked with supporting federal missions, including control of military police, engineer and civil support forces.

© Sputnik
Closing Arguments of Chauvin Trial Today, Jury Deliberation to Start
Monday’s closing arguments by Chauvin’s defence followed three weeks of testimony. The former police officer’s lawyers say Chauvin correctly followed his training at every step and did what any “reasonable police officer” would do. The prosecution maintains that Chauvin murdered Floyd, and encouraged jurors to use their “common sense” and allow the video of Chauvin leaning on Floyd’s neck with his knee for nearly nine minutes while he shouts “I can’t breathe” to speak for itself.

A conviction against Floyd by his multiracial, male and female jury would require a unanimous verdict. If one or more jurors don’t agree to convict, a mistrial will be declared, with the state having the opportunity to try him again. If convicted, Chauvin could get up to 40 years in prison.