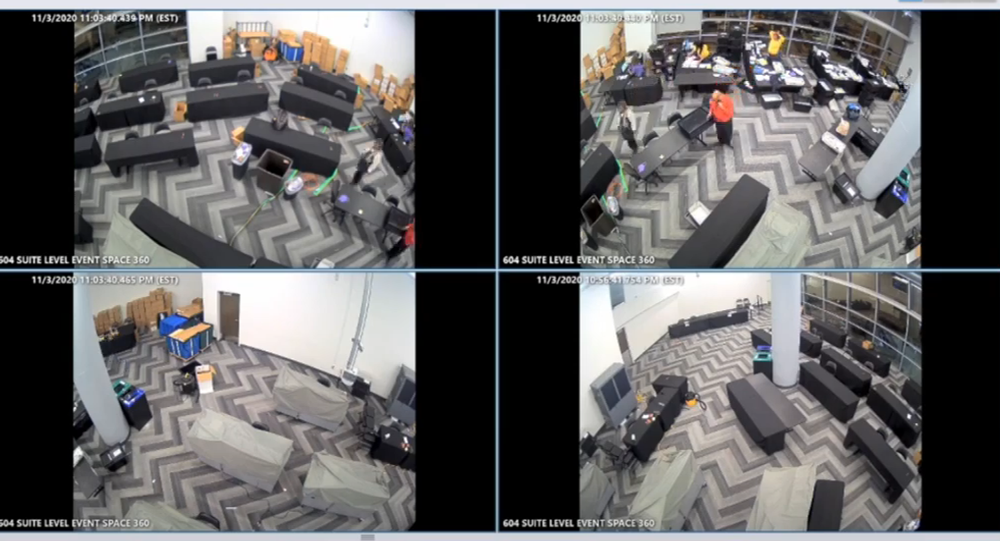 The President's legal team filed a new lawsuit in Georgia on Friday seeking to invalidate election results over the alleged inclusion of "tens of thousands of illegal votes" in the 3 November presidential vote.

Donald Trump has suggested that he would "easily and quickly" win the state of Georgia and its 16 electoral votes if Governor Brian Kemp and Secretary of State Brad Raffensperger were to approve "a simple signature verification".

I will easily & quickly win Georgia if Governor @BrianKempGA or the Secretary of State permit a simple signature verification. Has not been done and will show large scale discrepancies. Why are these two “Republicans” saying no? If we win Georgia, everything else falls in place!

Suggesting that signature verification would be certain to "show large-scale discrepancies," the President blasted his fellow Republicans for "saying no" to the idea.

Georgia is one of six battleground states where the Trump campaign has sought a legal challenge to the election results, alleging widespread fraud, mostly involving mail-in ballots, mainly in Democrat Party-run urban centers.

On Thursday, the Trump team presented what they said was video evidence of election fraud, pointing to election staffers in Georgia's Fulton County reportedly counting ballots pulled from under a table after informing supervisors, Republican observers and members of the press that counting was over for the day. Trump called the video "Blockbuster testimony" and evidence of "ballot stuffing by Dems".

© AP Photo / Evan Vucci
Trump Campaign Files Lawsuit in Georgia, Demands Invalidation of Election Results
Secretary of State Raffensperger dismissed the alleged video evidence, with a senior official from his office reportedly dismissing the footage as "unfounded" after an internal investigation. Trump volunteer Jacki Pick rejected the claim that the video had been debunked, suggesting that Raffensperger clearly "hasn't seen the video" to suggest otherwise.

On Friday, the Trump campaign filed a fresh lawsuit in Georgia seeking to invalidate the results of the presidential election in the state over the "tens of thousands of illegal votes" alleged to have swung the result in Democrat candidate Joe Biden's favour. The suit is said to include sworn affidavits from state residents who witnessed potential illegal activity.

Georgia officials have carried out three recounts of its almost five million ballots, with the latest hand recount concluding that Biden had trumped Trump by 11,769 votes, about 900 votes fewer than the previous hand count.

Trump campaign lead lawyer Rudy Giuliani outlined the importance of auditing mail-in ballots during a media presentation last month, suggesting that the moment a ballot is removed from its envelope and the envelope is thrown away, it becomes impossible to tell whether the person voting is "Mickey Mouse... a dead person," or "the same person 30 times."

The President railed against the introduction of mail-in ballots for months ahead of Election Day, describing them as "a disaster" that was "out of control" and pointing to the alleged ease with which they could be altered, forged or stolen compared with registered absentee ballots and votes cast in person. The President's concerns and his remarks that he could not guarantee a peaceful transition of power if he lost, prompted Democrat leaders to accuse him of using the mail-in vote issue as a pretext to allow himself to stay in power indefinitely.

Trump has accused his opponents of fraud using mass "vote dumps" most recently in an address to the nation on Wednesday in which he pointed to alleged late-night dumps of votes in Biden's favour in the early hours of the day after the election to wipe out his election-day lead.

The Biden campaign, other Democrats, some Republicans and most US media have dismissed Trump's fraud claims, and many world leaders, including Canadian Prime Minister Justin Trudeau, Israeli Prime Minister Benjamin Netanyahu, German Chancellor Angela Merkel, and Chinese President Xi Jinping have rushed to congratulate Biden for his victory.

Trump and First Lady Melania Trump will travel to Valdosta, Georgia on Saturday for a 7pm EST rally in support of GOP senators Kelly Loeffler and David Perdue ahead of 5 January run-off election against Democrat challengers Jon Ossoff and Raphael Warnock.