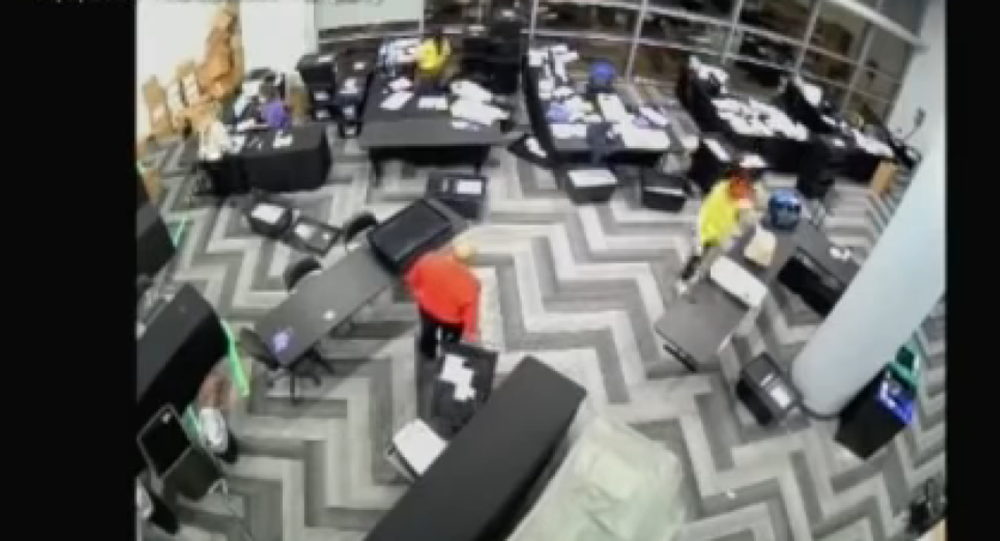 Earlier on Thursday, the Georgia State Senate Committee was presented with what Donald Trump described as "blockbuster testimony" that included a surveillance video from the Atlanta's State Farm Arena ballot counting location. The footage allegedly showed staffers staying behind and pulling out "suitcases of ballots" to count them unsupervised.

Georgia Governor Brian Kemp called for signature audit of the state election 2020 results on late Thursday after the release of a video allegedly showing election workers pulling out boxes with extra ballots to count them into the night without observation from the press and Republicans.

Touted by Trump and his allies as "blockbuster testimony" and "explosive fraud", the footage was presented by a volunteer to the Trump legal team, Jacki Pick, during the State Senate Committee hearing in Georgia. According to her explanation, the video was given to the Trump legal team by a private security firm inside Atlanta's State Farm Arena.

The call for audit, however, appears to be opposed by the one authorised to launch it, Georgia State Secretary Brad Raffensperger, who denied the video and recertified the state election results, according to Fox News.

“I called early on for a signature audit. Obviously, the secretary of state, per the laws and the [state] Constitution would have to order that and he has not done that", Kemp told Fox News in an interview. “I think it should be done. I think especially [given] what we saw today, it raises more questions."

​The Fulton County Board of Registration and Elections has reportedly organised a meeting that mainly focused on the video with alleged "evidence" that went viral shortly after Georgia Senate Committee hearing. According to Fox News, citing a senior official from the office of Raffensperger, the footage had been investigated and declared "unfounded".

The source also told Fox News that "Fulton County election officials had a designated observer at the location the entire time - a practice that has been in place since June". Raffensperger's office reportedly said that the ballots were not stored in "suitcases", as it has been alleged, but in the special storage cases built for the purpose.

The purported surveillance footage from Fulton County prompted an outcry among Trump allies, with the White House press secretary, Kayleigh McEnany, saying that "this is BASIC election integrity ignored right now" commenting that Kemp "finally" calling for the signature audit.

What took him so long???

This is BASIC election integrity ignored until now... pic.twitter.com/xK6fIJY2aj

​Trump tweeted his assertion that election staffers in Georgia had been "caught cold" attempting to count extra ballots.

People in Georgia got caught cold bringing in massive numbers of ballots and putting them in “voting” machines. Great job @BrianKempGA!

​Others, however, rolled out what they described as a "fact check", pointing out that the surveillance footage did not show an "election supervisor suspiciously pulling suitcases filled with ballots from under a table after telling poll workers to leave the room".

According to Lead Stories citing the chief investigator for the Secretary of State, press and the party observers were never told to leave, but "apparently followed workers who left once their job of opening envelopes was completed".

Contrary to that, Pick, who presented the "evidence", told Newsmax: "Yes, people were sent home, told to stop working, stop counting, but some people stayed behind: Sure enough, just as our poll watchers – well, our monitors – had said".

Pick also rejected claims that the video was "debunked", noting that the Secretary of State "clearly wasn't present" or "hasn't seen the video".

The allegations come as the Trump campaign continues to insist that the 3 November election was rigged by the Democratic party, filing numerous lawsuits in multiple key battleground states.

While refusing to concede to Joe Biden, projected by US mainstream media as the winner of the presidential election, Trump agreed to the launch of the formal process of transition of power.