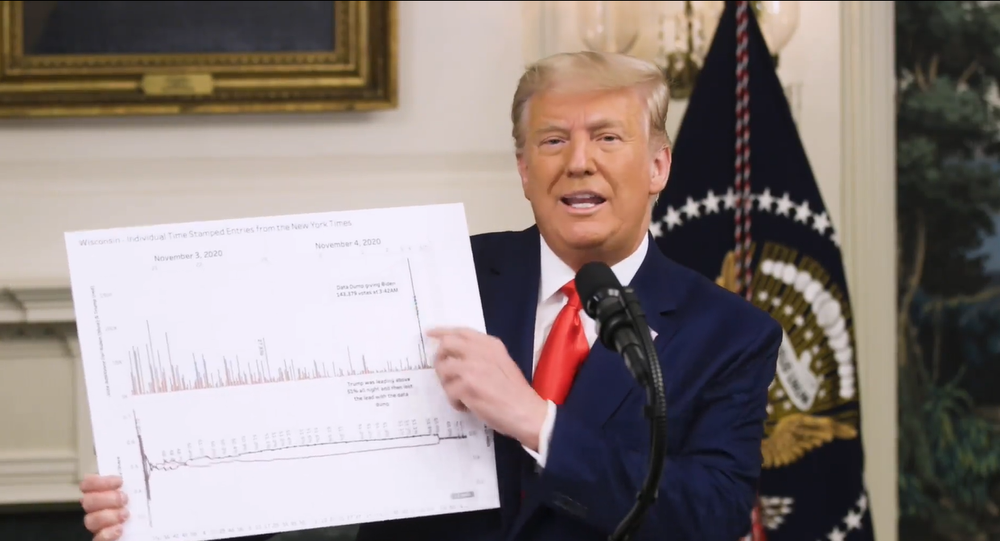 As the US mainstream media projected Democrat Joe Biden the winner of the presidential race, the sitting president, Donald Trump, has vehemently refused to concede, with his legal team challenging the results in court and claiming massive election fraud.

US President Donald Trump released an extensive video statement on Wednesday, suggesting that this "may be the most important speech" he has ever made and asserting that the US election system is "under coordinated assault and siege".

POTUS tweeted an outtake from the video, where he doubled down on his claims of election fraud that, as the Trump campaign continues to insist, took place during 3 November presidential election.

"We used to have what was called 'election day'. Now we have election days, weeks and months. And lots of bad things happened during this ridiculous period of time", he said. "Especially when you have to prove almost nothing to exercise our greatest privilege - the right to vote. As President, I have no higher duty than to defend the laws and Constitution of the United States. That is why I am determined to protect out election system, which is now under coordinated assault and siege".

Trump said that his campaign was told not to declare a premature victory and that it would take weeks, if not months, to determine the winner, slamming opponents for acting like they "already knew what the outcome was going to be".

"The Constitutional process must be allowed to continue. We are going to defend the honesty of the vote by ensuring that every legal ballot is counted, and that no illegal ballots is counted", POTUS asserted.

Trump lashed out at the Dominion voting system, claiming that "with a change of a chip you can press a button for Trump and the vote goes to Biden".

"We have to go to paper! Maybe it takes longer, but the only secure system is paper, not these systems that nobody understands, including, in many cases, the people that run them - although, unfortunately, I think they understand them far too well", Trump said.

Trump also alleged that some votes were counted in other countries, not in the United States. He labeled Dominion "a disaster" and said that every district that uses this voting software must be "carefully monitored and carefully investigated".

"It is statistically impossible that the person - me - that led the charge, lost", Trump insisted, boasting the "tremendous, unexpected success" that the GOP members had in the House of Representatives.

Trump insisted that a "Democratic political machine" engaged in voter fraud​ "from Detroit to Philadelphia, to Milwaukee, Atlanta and many other places", as the president alleged that millions of ballots were "sent to unknown recipients", using coronavirus pandemic as a "pretext".

"Many states such as Nevada and California sent millions of live ballots to every person... whether those individuals had requested ballots or not, whether they were dead or alive - they got ballots", Trump asserted.

Trump particularly pointed at Wisconsin, claiming that Democrats had his campaign "miraculously losing" at a certain point during election night, and alleging that a "massive dump of votes" occurred at 3:42 a.m., making Biden lead. He went on to suggest a similar example in Michigan.

Trump also referred to a report that allegedly said that in Nevada's Clark county, nine voters cast their ballots with intentionally incorrect signatures, and eight of the nine ballots were accepted and counted.

"They said you could sign your name as Santa Claus, and it would be accepted", Trump asserted.

Besides, POTUS slammed several states for allowing people to vote without presenting an ID or being a legal resident of the state they voted in, also repeatedly denouncing that many votes were cast after the legal deadline.

© Photo : Facebook / Donald J. Trump
Screenshot from the video statement by US President Donald Trump regarding the alleged US election fraud

"The Democrats had this election rigged right from the beginning. They used the pandemic - sometimes referred to as "the China virus", where it originated, - as an excuse to mail out tens of millions of ballots, which ultimately led to a big part of the fraud. A fraud that the whole world is watching", Trump asserted. "And there is no one happier right now than China".

Trump reiterated that his campaign is committed to going to the US Supreme Court to challenge the outcome of the election, noting that "hopefully they will do what's right for our country".

He also stated that the alleged mail voter fraud is a part of efforts to overturn the outcome of the 2016 election, when Trump was elected president.

"The mail-in voting scam is the latest part of their four-year effort to overturn the results of the 2016 election. And it's been like living in hell. Our opponents are proving many times, again and again, that they will say and do anything to go back into power", he said, recalling that he had been investigated ever since he was elected president and again slamming the "Russia hoax" that was looked into by Robert Mueller - who, in the end, found no evidence of collusion between the Trump campaign and the Kremlin in 2016.

Finalizing his speech, POTUS outlined that he does not mind losing the election, but stressed that the loss has to be fair.

"Ultimately, I am prepared to accept any accurate election result, and I hope that Joe Biden is as well", Trump said.

During his 46-minute video statement, Trump delivered his remarks on what he and his campaign described as evidence of massive election fraud.

He also addressed the stories that were delivered by people presented as whistleblowers earlier in the week,  particularly those where alleged contractors for US Postal Service said that additional ballots were delivered in trucks to the counting locations after the election night, and many ballots were duplicated or backdated.

Since the beginning of November, Trump campaign has been legally challenging the election results, filing lawsuits in several key battleground states like Arizona, Michigan, Pennsylvania, Georgia and others.

Despite refusing to concede to Joe Biden, who is projected by mainstream media to be the winner of the presidential race, Trump has initiated the launch of formal transition of power.

The final official result of the US election will be known after 14 December, when the Electoral College casts its vote.