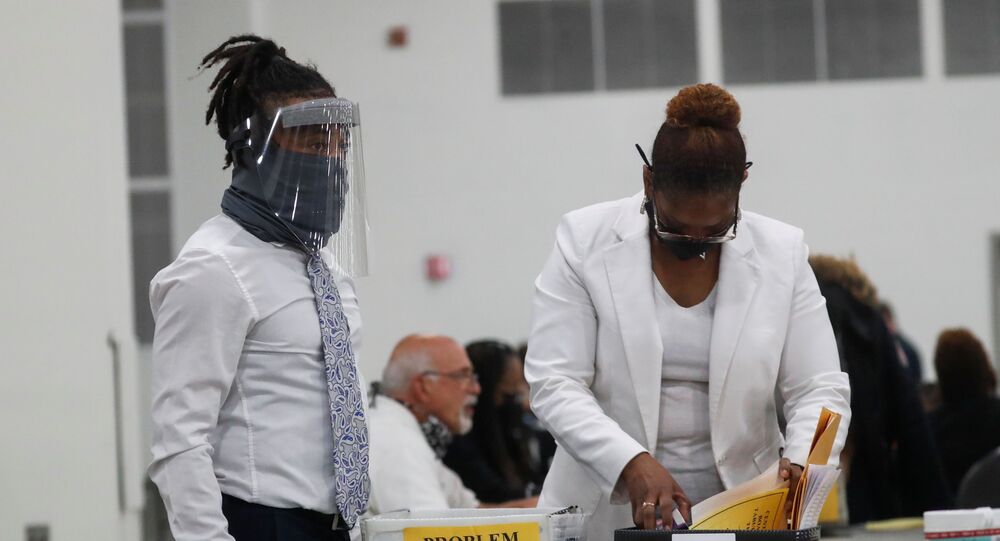 President Donald Trump has alleged that the Department of Justice and the FBI might have been "involved" in the election fraud he claimed took place on 3 November and during the subsequent vote counting.

A freelance IT contractor hired by Dominion Voting Systems to monitor operations at the TCF Centre in Detroit on 3 November, says her attempts to report rampant voter fraud she witnessed were ignored by the FBI despite all her efforts to the contrary. In testimony to the Michigan Senate Committee on Oversight, contractor Mellissa Carone said she first called the FBI on 5 November to report what she had witnessed throughout 3 and 4 November at the TCF Centre, but was disconnected and never received a call back, even after she managed to reach the agency herself.

"I spoke with a woman for at least 40 minutes. The phone disconnected. She had all my information. She never called me back. I had to call them back. I haven't been contacted back since", Carone explained to the committee.

The contractor shared with the committee that during the 26 hours she worked over two days she didn't see a single ballot for Donald Trump, describing her observation as "scary". In her written affidavit and statement for the Senate committee, Carone also shared other instances of the voter she witnessed, namely poll workers counting the same ballots eight to ten times and filling in and signing empty ballots themselves to "replace" cast ballots that a voting machine failed to read. The contractor noted that many of the counters, who worked alongside her at the TCF Centre confessed that they had little or zero training in their jobs.

Carone claimed in an earlier affidavit she had witnessed trucks that were supposed to deliver food for poll station workers, instead bring stacks of ballots, suspecting foul play. This claim has already been dismissed by a state judge, who found her testimony unbelieveable because it's something that's never been confirmed by any other polling station worker.

US President Donald Trump, who currently trails Democrat Joe Biden in the vote tally, has repeatedly alleged that the election was "stolen" via a series of violations and voter fraud, vowing to dispute the outcome of the voting via courts. While his legal team has so far achieved little in terms of overturning the election results in swing states, Trump took the time to blast the Department of Justice and the Federal Bureau of Investigation (FBI), for failing to pursue the reports of voter fraud purportedly found by his campaign.

Despite the efforts by Trump's legal team, all of the swing states, including Michigan, certified their election results and naming Joe Biden the winner of the voting in these states. POTUS' campaign vowed to dispute the certification, namely demanding to discard over a million mail-in ballots that arrived late or were purportedly illegally filed.

The president warned of possible mail-in fraud for months before Election Day, arguing that this voting method could be easily used to rig the election against him. On 1 December, a conservative US law group, the Thomas More Society, presented several whistleblowers at a press conference, who said they were ready to testify to election rigging they saw themselves. Among them was a US Postal Service (USPS) employee, who reported a "massive transfer" of ballots, many of which arrived after 3 November, but were backdated so they could be counted.