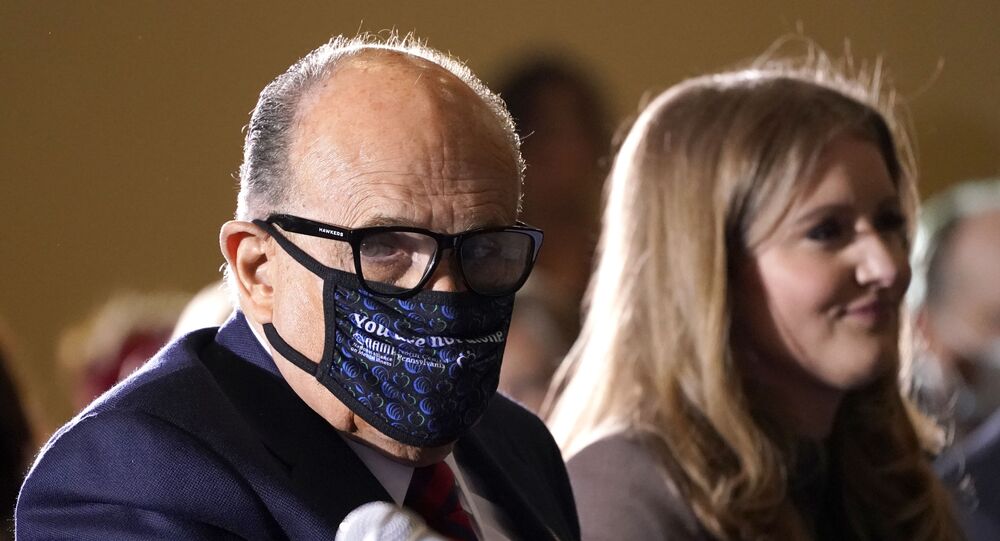 Though the official results of the 2020 US presidential election have not yet been announced, major US media outlets have projected Democratic candidate Joe Biden as the winner. The US president, Donald Trump, refuses to concede, claiming that the election was "rigged", suggesting that massive irregularities occurred during the voting.

On Tuesday prominent members of the incumbent US president's legal team, including former New York Mayor Rudy Giuliani as well as Jenna Ellis, a Trump campaign senior legal advisor and also the president's attorney, issued a statement that a US Department of Justice (DOJ) investigation did not take into account evidence and witnesses that they produced.

This statement follows US Attorney General Bill Barr's comments to the Associated Press, that the DOJ investigation has not found any evidence of massive voter fraud during the presidential election.

"With all due respect to the Attorney General, there hasn’t been any semblance of a Department of Justice investigation", Giuliani stated in a press release. "We have gathered ample evidence of illegal voting in at least six states, which they have not examined. We have many witnesses swearing under oath they saw crimes being committed in connection with voter fraud".

Trump legal representatives state that not a single witness has been interviewed by the DOJ. According to them, the DOJ has not audited voting machines or used their power of subpoena to "determine the truth".

'With all due respect to the AG, there hasn’t been any semblance of a Department of Justice investigation,' @RudyGiuliani#ElectionIntegrityhttps://t.co/DcPQ5ALOls

The president's lawyers promised to continue a pursuit of what they characterized as "the truth through the judicial system and state legislatures, and continue toward the Constitution’s mandate and ensuring that every legal vote is counted and every illegal vote is not".

"Again, with the greatest respect to the Attorney General, his opinion appears to be without any knowledge or investigation of the substantial irregularities and evidence of systemic fraud", the Trump lawyers concluded.

In a Tuesday interview to the Associated Press, Attorney General Barr - a Trump appointee - said that currently US attorneys "have not seen fraud on a scale that could have affected a different outcome in the election" in their probe of complaints filed by the Trump legal team that have claimed that there were massive irregularities in this year's election, including allegations of ballot stuffing, specifically ones sent by mail, and claims of dead people voting in favor of the Democratic candidate, especially in cities purportedly run by Democrats.

The Trump campaign has repeatedly claimed massive violations of the electoral process during the election, filing numerous unsuccessful lawsuits to initiate vote recounts in several key states that have all tended to shift the election outcome even more toward Biden. The Trump team has also argued that GOP observers were not let in to the ballot counting locations.

Over the last two days, hearings were held in the states of Arizona and Michigan, at which witnesses echoed  imputations of ballot stuffing and some signatures on them not matching the ones they should have resembled. A purported witness at an Arizona hearing suggested that election workers likely did not know how many ballots should have been there in total, claiming that trucks with new ballots were continuously arriving.

Trump continually asserts that the election was "stolen" from him in favor of Joe Biden, and promised to challenge the results in court, adding that he would at some point provide substantial evidence for his accusations. Nevertheless, refusing to concede, Trump has reportedly accepted the launch of the transition of executive power to Joe Biden, the projected winner of the election.

The official results of the election are expected to be announced after 14 December, in the Electoral College vote.