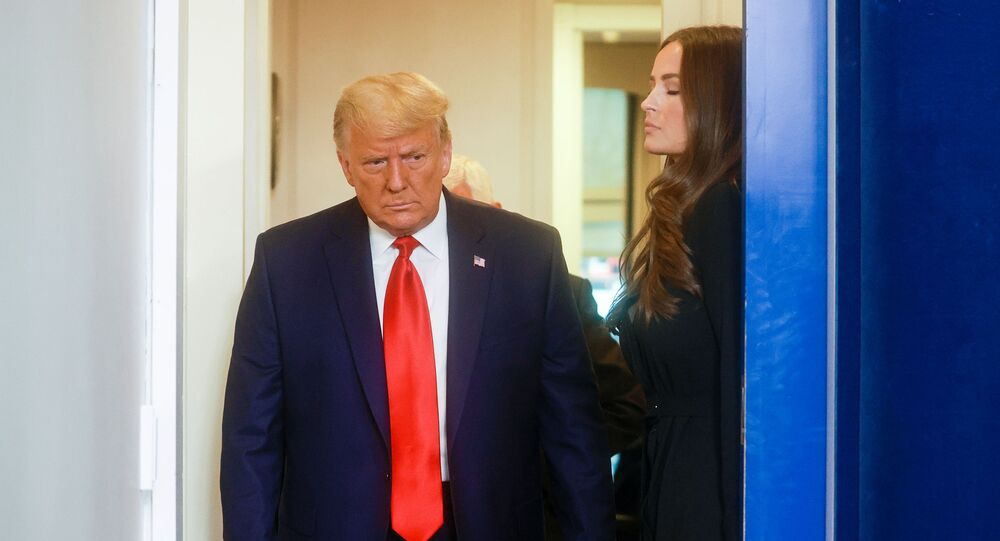 The Trump campaign has accused Democrat Party officials in half a dozen battleground states of widespread election fraud, mostly involving mail-in ballots. Democrats, most legacy media, and even some Republicans have dismissed the allegations and urged the President to concede defeat.

President Donald Trump has accused the Department of Justice and the Federal Bureau of Investigation of possibly being 'in on' the alleged plot to steal the election from him.

"This is total fraud and how the FBI and the Department of Justice, I don't know, maybe they're involved, but how people are allowed to get away with this stuff is unbelievable. This election was rigged. This election was a total fraud," Trump alleged, speaking to Fox News in a telephone interview Sunday morning.

"They've been there a long time. Some of them have served a lot of different presidents, and they have their own views. All I can say is... with all the fraud that's taken place, nobody has come to me and said 'the FBI has nabbed the people that are doing this scheme,'" he added. The President went on to complain that the FBI and the DoJ have yet to investigate Obama-era officials' potential illegal activities, including spying on the Trump campaign in 2016.

Suggesting that the world was watching what's going on in the United States regarding the election fraud allegations, Trump said that he's had leaders of other countries calling him up and saying the 3 November vote was "the most messed-up election we've ever seen."

'Hundreds and Hundreds of Affidavits'

Going through his campaign's claims, Trump pointed to alleged widespread fraud involving mail-in ballots, including cases of people receiving multiple ballots, dead people 'voting' and requesting applications to vote, so-called 'glitches' of Dominion voting machines which shifted thousands of votes from Trump to Biden, and problems of poll watchers being "thrown out" of counting rooms in major Democrat strongholds. Trump insisted his campaign had "hundreds and hundreds" of sworn affidavits to back up these allegations.

© Photo : Twitter / @justin_hart
Trump Tweets Charts Detailing Disappearance of Election Night Lead Due to Pro-Biden ‘Vote Dumping’
The President also recalled the discrepancy between results coming in on election night and those coming in later, thanks to large "vote dumps" in Biden's favour in Michigan, Pennsylvania and elsewhere. "And all of a sudden I went from winning by a lot to losing by a little, and in some cases it took a period of time to do it," he said.

Trump accused state judges and the media of shirking their responsibilities to hear his campaign's lawsuits and cover the fraud allegations, and attacked big tech for its alleged censorship. "The media doesn't want to talk about it. They know how fraudulent this is. It's no different than Hunter," he said, referring to Joe Biden's son and his alleged pay-to-play corruption in Ukraine during the Obama presidency.

"We don't have freedom of the press in this country. We have suppression by the press. You can't have a scandal if nobody reports about it," Trump complained, referring to efforts by Twitter and Facebook to cover up a New York Post story about Hunter Biden's laptop allegedly proving illegal activities, and other mainstream media's lack of coverage.

As for the courts, Trump claimed that judges in the swing states weren't allowing his campaign to put the evidence in.

"We're not allowed to put in our proof. They say 'you don't have standing'. I said to the lawyers that I would like to file one nice, big, beautiful lawsuit with tremendous proof. We have affidavits. We have hundreds and hundreds of affidavits... [people] willing to sign under penalty of perjury (you go to jail)... These are respected people. These are people that are putting their life at risk. And they don't want to take the affidavits. Then they say we don't have proof."

Echoing claims made by other members of his staff - as well as members of his family - about the supposed unlikelihood of Biden receiving 15 million more votes than Barack Obama, Trump suggested repeatedly in the interview that he believed there was no way that Biden got 80 million votes, or could win more votes in African-American communities than Obama.

© REUTERS / TOM BRENNER
Putting Obama Team Back Together? Who's Who in Biden's Cabinet
"I got 63 million votes four years ago and won quite handily in the electoral college... We were hoping to get 68 or so and we felt that was a path to an easy victory. I got 74 million votes - the largest in the history of a sitting president. So many millions more than we were even trying to get. And everyone said this is over. I'm telling you, 10 o'clock [election night] everybody thought it was over. And then the phoney mail-ins started coming in," Trump said.

Major US media called the election in Biden's favour on 7 November, with the Democrat projected to win 51.1 percent of the popular vote and 306 votes in the Electoral College, well above the requisite 270. President Trump has refused to concede. The Electoral College is expected to cast its votes formally for president and vice-president on 14 December, with votes to be counted by Congress on 6 January, and the inauguration slated for 20 January 2021.

Reputations on the Line

Asked to comment on Trump's latest allegations, Dr. Miriam Ramirez, a political analyst and former senator from Puerto Rico, said that while she isn't in direct contact with Trump's legal team, she knows and respects the people involved, and believes they wouldn't put their professional reputations on the line without serious evidence.

"I respect Rudy Giuliani, he was a mayor of New York and when he ran for the Office I helped him in this election and campaigned for him in New York. There is Newt Gingrich, who was speaker of the House and Mike Huckabee who’s got terrific reputation as [Arkansas] governor and even ran for President when Trump ran. They are all very well respected persons and they are in charge of this investigation. I am totally convinced that they wouldn’t put their lifetime reputation with anything that is fraudulent. Or try to do something that is wrong. I think that President trusts [Attorney General Bill Barr]. I don’t know whether he’s referring to the local state justices. Some of them returned the evidence saying that’s not real," Ramirez said.

Saying she wasn't sure how the fraud allegations will play out from here, the former senator said she believed most Americans would like to "make sure that this experience never happens again," and demand adequate safeguards so "that there is no doubt about the results of the election."