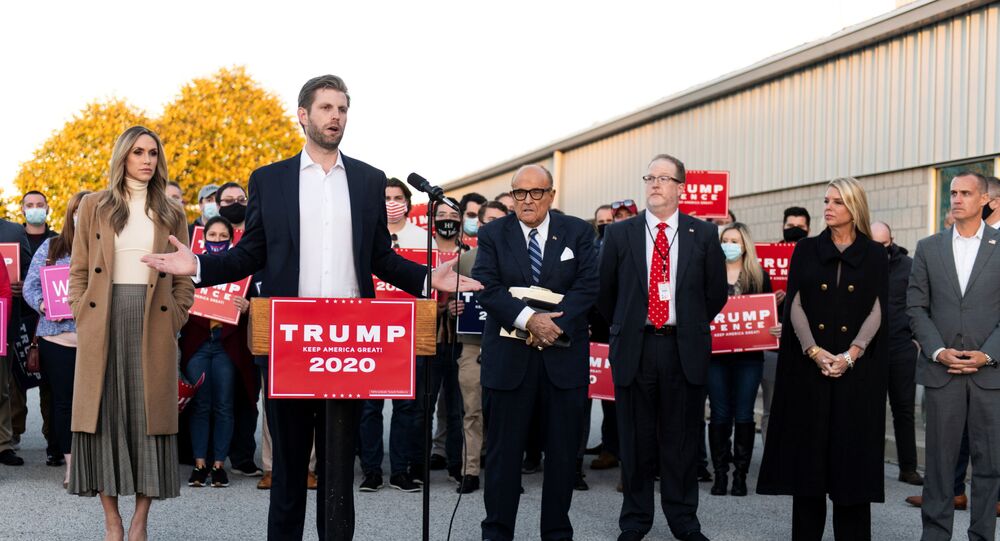 Donald Trump's campaign and family have been maintaining that America's presidential elections have been rigged, while filing a number of lawsuits across the country to dispute the results. On Saturday morning, the President took to Twitter to claim that more than 1 million votes in Pennsylvania cast for Biden were created “out of thin air”.

Eric Trump has cast doubt on the fact that Joe Biden has received many more votes that ex-President Barack Obama did in 2012, while “hardly campaigning” and not appearing in public in “weeks”.

Does anyone believe that Biden got 15 million more votes than Obama in 2012? This from a candidate who would go days/weeks while hardly campaigning.

​Biden, who has now been proclaimed President-elect by major US networks, received more than 80 million votes, according to the most recent tally, numbers that have been disputed by Donald Trump’s team.

In 2008, Barack Obama set a new record by gaining support from nearly 70 million voters. Four years later, he was set for re-election after almost 66 million ballots were cast for him.

But Donald Trump’s son remained doubtful over Joe Biden’s success in this regard.

“Does anyone believe that Biden got 15 million more votes than Obama in 2012?” Eric Trump asked his 4.5 million Twitter followers.

And some were keen to reply, suggesting that such a staggering figure was simply an attempt to get his father out of the White House, rather than genuine support for the Democrat challenger.

The whole country rallied to vote Trump out. His dishonesty, corruption, bullying and bragging disgusts the good people in this country. The resistance that did their job.

After 4 years of your family I’m shocked it wasn’t 30 million more.

What's really amazing is that your father got as many as he did.

To others, however, the quantity of votes simply proved that the election was a fraud, a claim being made by the Trump campaign.

I believe Democrats rigged the election.

No doubt in my mind that they cheated! 😡

Eric’s tweet came a day after his father maintained that there was “no way” Biden could have received such a record-breaking support.

“This was a 100% RIGGED ELECTION”, Trump said on Twitter.

According to POTUS' later tweet, more than a million votes cast in support for Biden in Pennsylvania “were created out of thin air”.

The statement came shortly after the US Court of Appeals for the Third Circuit in Philadelphia denied the Trump campaign's request to block certification of Pennsylvania’s election results which at present put Joe Biden in a winning position, with a less than 2 percent vote difference between the two candidates.