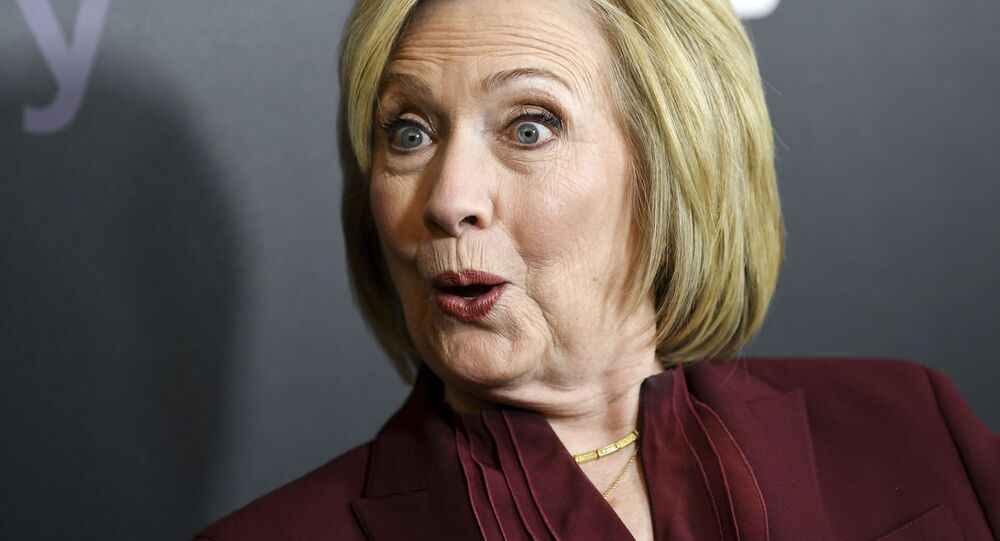 On Tuesday, Ratcliffe passed to Senate Judiciary Committee Chairman Lindsey Graham (R-SC) a report compiled by Russian intelligence in July 2016 and then obtained by US intelligence agencies “alleging that US Presidential candidate Hillary Clinton had approved a campaign plan to stir up a scandal against US Presidential candidate Donald Trump by tying him to [Russian President Vladimir] Putin and the Russians' hacking of the Democratic National Committee,” according to a letter from Ratcliffe to Graham which was published by the Senate.

However, Ratcliffe adds that the intelligence committee whose information he compiles for the White House “does not know the accuracy of this allegation or the extent to which the Russian intelligence analysis may reflect exaggeration or fabrication.”

Ratcliffe notes that former CIA Director John Brennan had briefed then-US President Barack Obama and “other senior national security officials” on the report’s contents on July 26, 2016, including that one of Clinton’s foreign policy advisers had cooked up the idea.

The letter further notes that by September 7 of that year, FBI Director James Corney and Deputy Assistant Director of Counterintelligence Peter Strzok had received an investigative referral regarding "US Presidential candidate Hillary Clinton's approval of a plan concerning US Presidential candidate Donald Trump and Russian hackers hampering US elections as a means of distracting the public from her use of a private mail server."

“This is Russian disinformation,” Rachel Cohen, a spokesperson for Senate Intelligence Committee Vice Chairman Mark Warner (D-VA), tweeted on Tuesday, adding that it had been “laundered by the Director Of National Intelligence and Chairman of the Senate Judiciary Committee.”

However, Ratcliffe shot back at criticism by Cohen and other Democratic figures, saying in a statement released by his office: “To be clear, this is not Russian disinformation and has not been assessed as such by the Intelligence Community. I’ll be briefing Congress on the sensitive sources and methods by which it was obtained in the coming days.”

Indeed, after Democratic National Committee (DNC) emails were hacked in June 2016, cybersecurity firm CrowdStrike, contracted by the FBI to examine the DNC server, accused Russian intelligence operatives of being behind the break-in - including hacker Guccifer 2.0, after that person claimed responsibility. Then, when WikiLeaks published the emails in the following months, the accusation of collusion with or control by Moscow was extended to it and co-founder Julian Assange as well.

Those emails revealed damning evidence the DNC had helped Clinton triumph over rival Sen. Bernie Sanders (I-VT) in the primaries, that Clinton’s campaign had conspired to gain an unfair advantage over Trump in the presidential debates and that the DNC was deeply indebted to the Clinton family.

The Kremlin has repeatedly denied the accusations, and the severe problems with the evidence behind the FBI’s conclusions of a Russian operation have been extensively dissected. After Trump won the 2016 election that November, Brennan presented a report short on evidence concluding a “Russian influence campaign” had swayed the vote, and the “Steele dossier” appeared, supposedly proving Trump was controlled by the Kremlin because Putin had compromising information about the real estate mogul which he was threatening to release.

The credibility of former British spy Christopher Steele’s report, paid for by Clinton’s campaign and the FBI, has also been severely undermined.

According to Politico, the Senate Intelligence Committee “was made aware of” the July 2016 Russian intelligence report “early on in its investigation, and quickly dismissed it.”

“This latest information provided by DNI Ratcliffe shows there may have been a double standard by the FBI regarding allegations against the Clinton campaign and Russia,” Graham said in a Tuesday statement. “Whether these allegations are accurate is not the question. The question is did the FBI investigate the allegations against Clinton like they did Trump? If not, why not? If so, what was the scope of the investigation? If none, why was that?”

Comey is expected to testify before the Senate Judiciary Committee on Wednesday, followed by former Deputy FBI Director Andrew McCabe next week, both as part of a renewed probe into the FBI’s investigation of the alleged Russian interference operation in 2016. However, former special counsel Robert Mueller, who as head of the Russiagate investigation was Strzok’s boss, will not be testifying before the Senate committee.