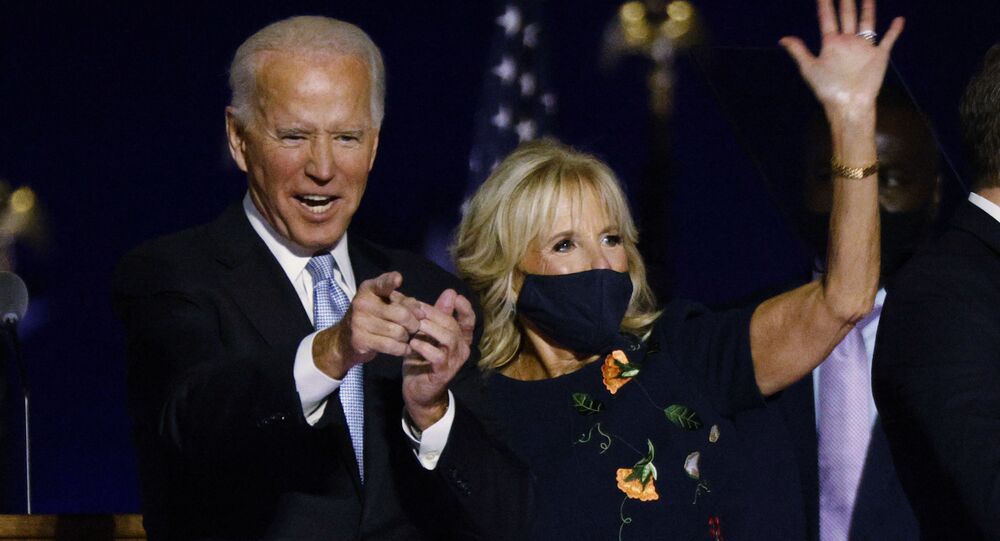 Earlier on Saturday, US media outlets called the two crucial states of Nevada and Pennsylvania, with their 6 and 20 electoral votes, respectively, for Biden, pushing his projected total of gained electoral votes from 264 to 290, twenty votes beyond the amount needed to win the presidency.

The first photo, taken on Saturday, shows Biden embraced by his grandchildren as US media outlets projected him to be the winner of the 3 November race against incumbent Republican President Donald Trump.

Naomi, the daughter of Hunter Biden and the oldest of the former vice president's grandchildren, also shared an image of Biden and his wife, Jill Biden, when they were young.

"They've come a long, long way together", Naomi captioned the photo, while tagging a recent tweet by her grandmother.

In the tagged tweet, Mrs Biden shared a photo of her and the Democratic candidate displaying a sign reading, "Dr & President Biden Live Here", as she covers the word "Vice" with her hand.

"He will be a president for all of our families", the projected US First Lady captioned her post.

On Saturday, Joe Biden and his vice-presidential running mate, Senator Kamala Harris, declared victory over Trump after all major US media outlets called the two crucial states of Nevada and Pennsylvania for the Democrats, pushing their potential total of electoral votes from 264 to 290, twenty votes above the minimum needed to win the White House.

Trump has rejected a Biden win, saying that he will challenge the results in court on Monday.