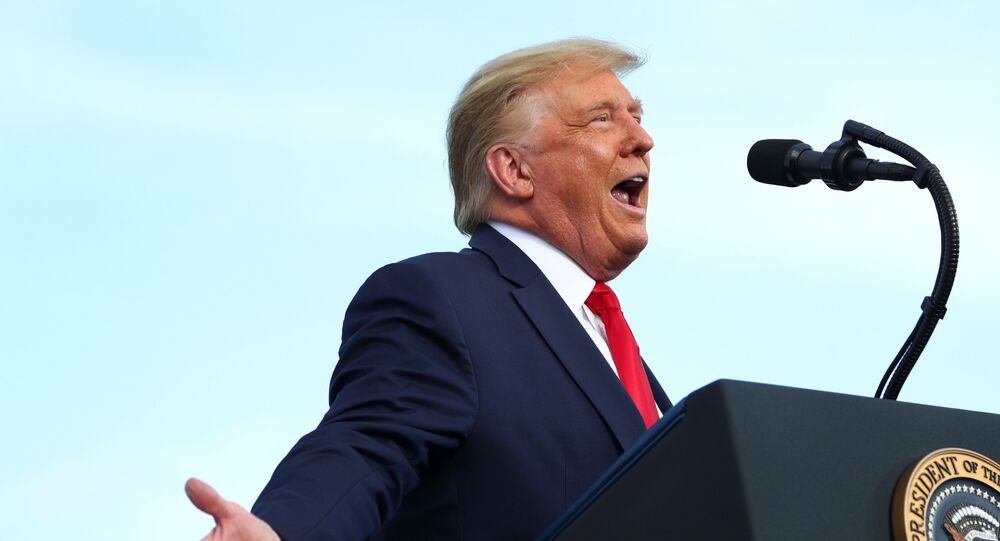 On Thursday, during his final debate with US President Donald Trump, Democratic presidential candidate Joe Biden said that he “would transition from the oil industry”, arguing that it “has to be replaced by renewable energy over time” because it “pollutes significantly”. Trump described Biden’s remark as “biggest statement in terms of business”.

US Republican President Donald Trump during a Friday campaign rally in The Villages, Sumter County, Florida, once again slammed remarks made by Democratic presidential candidate and former Vice President Joe Biden at Thursday night’s debate that “would transition from the oil industry”.

Trump said that Biden’s statement regarding the country’s oil industry could be “perhaps the most shocking admission ever made during a debate.”

“One of the most stunning moments last night was when Joe Biden admitted he wanted to abolish the oil industry,” Trump told his supporters. “Did you see him this morning? He said ‘I didn't really mean that’.”

The president, who is visiting Florida in order to vote on Saturday at his permanent residence, argued that the Dem candidate had stated, “We want to phase it out”.

During Thursday's debate, Biden, in response to a question from Trump about whether he would close down that sector of the economy, said that he is planning to "transition from the oil industry" and eventually lead the nation towards renewable energy.

At the debate, Trump described Biden’s promise as “biggest statement in terms of business”, claiming that the Democratic nominee said that “he is going to destroy the oil industry”.

In response, Biden accused Trump of taking his comments out of context, adding that the US needs to “move toward a net-zero emissions... by 2050 totally.”

Earlier on Friday, Biden gave another version of his oil industry plan while responding to a CNN reporter.

During the debate, Trump accused his rival of endorsing a ban on fracking, arguing that the former VP changed his stance after “he got the nomination” in order to win the state of Pennsylvania.

“He was against fracking,” Trump argued during the debate. “He said it ... until he got the nomination, went to Pennsylvania, then he said -- but you know what Pennsylvania, he'll be against it very soon because his party is totally against it.”

Biden stated that he “never said that I oppose fracking”, adding that he what he said was that “no fracking and/or oil on federal land”.

Trump responded by saying that Biden’s remarks were “on tape”.

“Show the tape! Put it on your website!” Biden challenged Trump. “The fact of the matter is, [Trump is] flat lying.”

Not long after, The Trump re-election campaign posted a video of Biden showing the Dem candidate opposing fracking.

The US Election Day is set for 3 November. Democratic nominee Joe Biden is maintaining a steady 10 percent national lead over Trump, according to Quinnipiac University Polls.