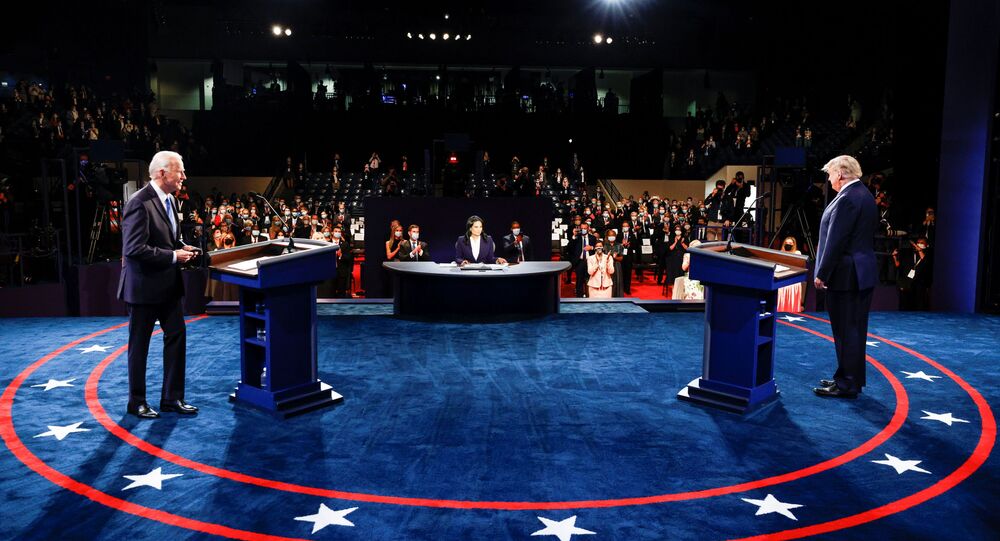 The 22 October debate between President Donald Trump and ex-vice president and Democratic nominee Joe Biden has brought an end to a series of pre-election face-offs. Academics and political analysts have discussed the contenders' final political battle and its potential impact on the outcome of the election.

The contest's assessment in the US media has polarised along party lines: CNN and The New York Times insist that Joe Biden nailed it and won while the National Review and Fox News called out the Democratic contender's "lies", arguing that Donald Trump's performance was stronger. However, both parties agree that since over 47 million Americans have voted early in the 2020 elections the 22 October clash could hardly become a game changer.

The last-minute rule changes allowing the moderator to mute the mics of the candidates apparently served its purpose and voters were able to see clear policy differences between their two options for president, according to the political scientist.

"Trump seemed to change his strategy for this debate, trying to be kinder, less boisterous, and more deferential to the moderator and his opponent", Burge observes. "However, he drifted from that tone as the night wore on. He began to go back to his posture in the first debate - disruptive, loud, and argumentative".

Out of the six topics offered for discussion by the event's moderator, NBC White House correspondent Kristen Welker, Joe Biden effectively criticised Trump for his handling of the crisis, notes Thomas Sutton, a professor and political analyst at Baldwin Wallace University in Ohio.

Trump mentions Florida during the first minute of the debate as an example of a place where the coronavirus spiked and receded. Says virus is going away, but it’s spiking again nationally and at a lower but still significant level in Florida.

​"Biden said Trump had no plan, played down the seriousness of the crisis in January, and was partly responsible for 220,000 deaths in the US", the professor notes, adding that for his part, the incumbent president "strongly defended his handling of the COVID-19 crisis", "promising that the country was turning a corner, and that a vaccination would soon be widely available".

DEBATE: Biden claimed he will end the coronavirus pandemic, but offered no solutions or plans to do so

​The former vice president even went as far as to suggest that "anyone who's responsible for that many deaths should not remain as president of the United States of America".

"Biden often turned to the camera to speak directly to the audience about how families were struggling with COVID-19", Wallace recollects.

While the handling of the COVID-19 pandemic remains Trump's sore point, the president performed better when it came to more typical questions like the economy, national security, and foreign policy, according to Matthew Wilson, associate professor of political science at Southern Methodist University.

He notes that Biden did provide Trump some openings to criticise him in the campaign's closing weeks.

Trump: "Would you close down the oil industry?"

Biden: "I would transition from the oil industry, yes."

​"His promise to phase out the oil industry will not play well in many parts of the country, and his claim that no one lost their health insurance under Obamacare was dubious", Wilson points out.

​Biden was also spotted committing a number of gaffes. One of them was the ex-vice president's "misplaced reference" to Adolf Hitler during the discussion of US foreign policy, as Democratic strategist Doug Schoen remarked in his op-ed for Fox News.

"Having a good relationship with leaders of other countries is a good thing", Trump noted touching upon US negotiations with North Korean leader Kim Jong-un.

Biden responded: "That's like saying we had a good relationship with Hitler before he in fact invaded Europe".

Immigration, race, and climate change issues have also exposed stark differences between the contenders, according to Emma Long, senior lecturer in American Studies at the University of East Anglia.

Biden described immigrant children being "ripped" from their families, while Trump argued that Latin American cartels and gangs are using these minors to get into the US, adding that the roots of the problem lie in the Obama administration's policies.

The two also clashed over the 1994 Crime Bill, which was at that time backed by Biden and led to the mass incarceration of young black men. While acknowledging that support for the legislation was a mistake, Biden fought back claiming that Trump is "the most racist president in American history".

Being apart of the demographic most hit by the 94 Crime Bill, I gotta say, though it may be therapeutic to hear Trump call out Biden on the bill it's not new information. Without bold solutions to inspire Black voters, Trump isn't swaying many more. It is what it is. #debate

​As for climate change, while Biden called it an existential threat to the nation, Trump retorted that the Paris Accords hurt the US economy, the lecturer points out.

The leitmotif of Trump's message with regard to domestic matters was that despite being in politics for 47 years, Joe Biden has largely failed to fix the nation's most burning internal issues. According to the incumbent president, he has done more in just 47 months.

Tonight on stage, you saw a President who has accomplished more in 47 months than the politician on the other side has ever done in 47 years. Outstanding night for President Trump. Four More Years! @realDonaldTrump

​"It is a serious handicap for the Democratic Party to be running a candidate with such a long record, as it is easy for Trump to use this to highlight previous mistakes and demand why action wasn't taken in the past. It is a strategy that worked for him previously against Hillary Clinton", says Dr Roslyn Fuller, director of the Dublin-based non-profit think tank the Solonian Democracy Institute.

She also remarks that Biden's attempt to pull off a tough guy image didn't really come together for him given his age and previous "nice-guy persona".

The Bidens and 'Laptop from Hell'

As was earlier predicted by conservative media pundits, Trump brought up the issue of Joe Biden's alleged corruption during the debate, referring to "smoking gun emails" found on a laptop supposedly belonging to Joe's son Hunter.

Having said that he "had not taken a penny from any foreign source ever in [his] life", the former vice president tried to divert the subject to Trump's China businesses and alleged tax avoidance. However, the president returned to the "laptop from hell" issue over and over again.

"There are 50 former national intelligence folks who said what he's accusing me of is a Russian plant", insisted Biden. "Five former heads of the CIA — both parties — say what he's saying is a bunch of garbage. Nobody believes it except him and his good friend Rudy Giuliani".

"You mean the laptop is now a Russia-Russia-Russia hoax?", asked Trump. "You have to be kidding, here we go again with Russia".

This actually happened... Joe Biden pulled the "Russia" card in a final act of desperation! 😂#Debates2020https://t.co/Qh7VPX3lpH

​Earlier, the Director of the National Intelligence Office confirmed that the disclosure concerning Hunter Biden's emails have nothing to do with Russia and is not part of a foreign "disinformation campaign".

"Both candidates grossly overstated their cases", believes Tom Switzer, executive director of the Centre for Independent Studies. "Trump accused Biden of enriching himself personally when there is no evidence; whereas Biden claimed that Trump personally was responsible for the deaths of nearly 220,000 Americans, which is self-evidently unfair".

Funded by tax dollars, by the way https://t.co/uQ3dBemD7O

​For their part, Facebook and Twitter limited the circulation of the bombshell report, with the latter banning the New York Post's article from being shared for a few days and blocking the newspaper's account.

The scale of this scandal is beyond historic

It is unlikely that the debate will tip the balance in favour of either candidate, according to the observers: "Will the debate make a difference for voters? 46 million have already voted; there are few who are undecided", remarks Thomas Sutton.

At the end of the day there is little scholarly evidence that voters will be moved by anyone's debate performance this late in the campaign season, echoes Ryan Burge.

"Trump's position in the polls at this stage is much weaker than it was four years ago", he says. "President Trump has proven incapable of expanding his base of support over the last four years and there's no reason to think he won over wide swaths of swing voters with this performance".

Having agreed that Biden leads in the polls Emma Long warns against leaping to conclusions: "Hilary Clinton was ahead too, albeit by a smaller margin", she says. "Trump's core supporters have shown themselves to be consistently loyal since 2016 and the campaign will be hoping nothing changes now. The question is where these voters are, and whether the margin is large enough in swing states to win the Electoral College".

"All things considered, Trump performed so much better than his first debate that he marginally won the debate", Tom Switzer believes.

Switzer does not share Burge's skepticism with regard to Trump's election odds. Quite the contrary, the think tank director deems that the incumbent president is likely to win.

"Barring a last minute political surprise or miracle, it's difficult to see Biden winning the White House", Switzer argues. "The stench of failure around Trump is so great and the mood of America is so grim that there is a growing sense that this election is Biden's to lose".