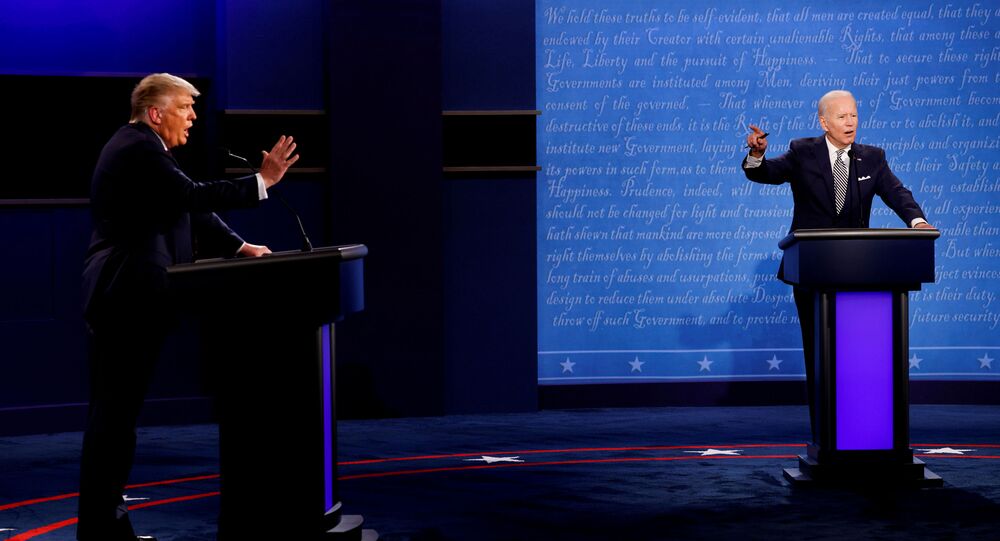 The final presidential debate between Donald Trump and his Democratic rival Joe Biden was dominated by several subjects: the coronavirus outbreak and corruption charges. Trump had to defend his administration's attempts to deal with the disease, which according to John Hopkins University has so far infected 8.4 million people in the United States and killed more than 223,000, while Joe Biden addressed recent reports that he profited from his son's business dealings in Ukraine and China during his tenure as vice president, denying the allegations.

During and after the debate people rushed to social media to weigh in on the last face-off between Trump and Biden. Hollywood celebrities too decided to speak up on the issue, but it appears they were divided on who won the debate.

Actress Alyssa Milano, best known for her role in Charmed, spoke about the administration's response to the coronavirus pandemic, claiming that Donald Trump doesn't care whether Americans "live or die".

.@joeBiden cares about American lives and their livelihoods. Trump doesn't care if we live or die. Therein lies the fundamental difference between Biden and Trump. #Debate2020 #TrumpLied220KDied #HealthcareVoter

​Actress Kirstie Alley, famous for her role in Star Trek II, praised Trump's performance during the final debate, saying this was "the best" she has ever seen. The Republican, who doesn't mince words when speaking with his opponents, this time debated his rival in a more or less restrained manner, which pundits say scored him extra points and made him look stronger.

Trump sent love letters to North Korean dictator, he takes the word of Putin and of the Saudi murderer MBS as they kill our journalists and taking out bounties on our military men and women.

​During the debate both politicians clashed over race relations in the United States, with Trump pressing Joe Biden over his support for the 1994 Crime Bill that led to a sharp increase in the number of black Americans being incarcerated. Trump also questioned why Biden didn't do enough to improve race relations in the United States when he was vice president under Barack Obama. "It's all talk but no action with these politicians", Trump said. The Republican's view was shared by black singer and model Kaya Jones, who voiced doubt that Biden will be able to fix the problem if he becomes president.

If you couldn’t fix racial divide during your time as VP with the first half black half white president what makes you think you can do it now? Sorry we don’t have another 47 years to hear the same old bs and again no results #RedTsunami

​Singer Uzo Aduba praised Joe Biden's statement during an argument over the coronavirus. Trump blamed blue states (run by Democrats) for stalling negotiations on coronavirus relief. Biden responded with a statement saying he doesn't see blue or red states. "What I see is America – the United States", Biden said.

“I don’t look at this in terms that he does: blue states and red states. It’s The United States.” @JoeBiden is running to unite this country that has been ripped at the seams. #PresidentialDebate2020

​​Actor James Woods weighed in on the reports about Joe Biden reportedly being involved in his son's business dealings in China and Ukraine, something the Democrat has vehemently denied. The star of Once Upon a Time in America, called the Biden family a vacuum cleaner.

​Actor and comedian Billy Eichner, best known for Billy on the Street and his role in Parks and Recreation, contended that Trump's performance during the debate was an "embarrassment".

Wow. Even by Trump standards, this is an embarrassment for him.

​Meanwhile another actor and comedian Terrence K Williams said he believes the president's performance won him the upcoming election.

President Trump just won the election at the debate

​Polls show that most Americans have already made up their minds about who they're going to vote for on 3 November, while pundits say that it's unlikely this debate will sway undecided voters.