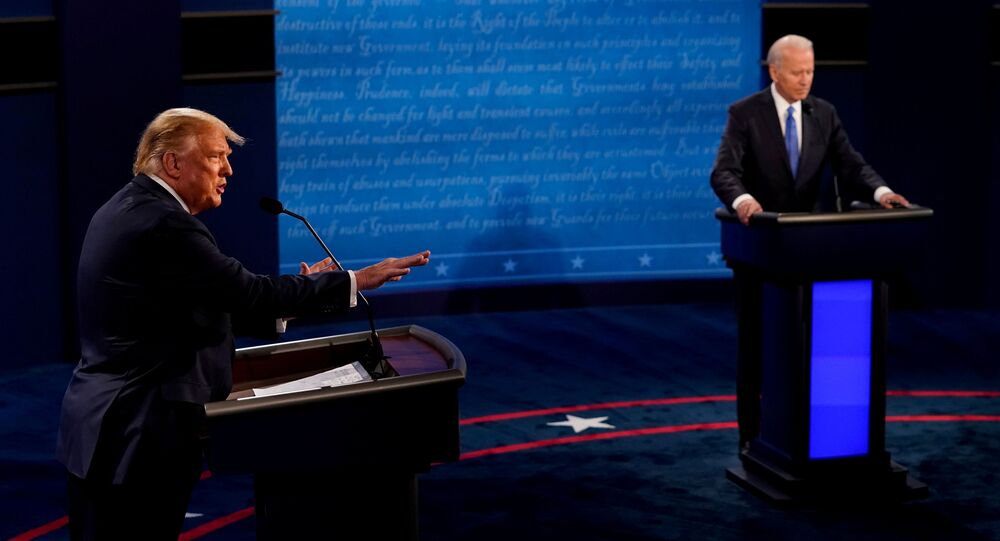 Following the debate, both presidential candidates have returned to campaigning in a last-ditch attempt to gain the support of undecided voters. There are now just 11 days to go before the US election, with most national polls showing Biden ahead of Trump.

From immigration and climate change to the coronavirus, economy, and national security – it seems that during the final presidential debate between President Donald Trump and his challenger Democrat Joe Biden, the two politicians managed to spar over just about every important topic. Both contenders were lauded for their orderly and focused behaviour during Thursday's event. As is custom, both candidates’ camps claimed victory in the debate, but the media and the viewers were left divided, with one side saying that Trump’s unexpectedly restrained performance had secured him a hands-down victory, while the other side contended that Biden looked more solid than the Republican president.

One of the most interesting moves Joe Biden made during the bout was when he looked at his watch after 1 hour and 22 minutes, said body language expert, certified psychiatrist, and best-selling author Dr Carole Lieberman. According to Dr Lieberman, this detail showed how stressed the former vice president was and how much he wanted the event to be over.

"Joe Biden felt fear. He was barely holding himself together and was afraid that, if the debate went on much longer, he wouldn’t be able to hide how lost he felt", Dr Lieberman told Sputnik.

Commenting on Trump’s body language and the emotions the president felt during the debate, she said the following:

"President Trump kept looking Joe Biden and the moderator in the eye when he was talking to them. He didn’t break eye contact with them in order to stare into the camera in a dramatic, phony plea to reach the TV viewers - like Joe Biden did. Trump felt sincerely passionate about what he was saying, and astonished that Joe Biden - who he feels would destroy America - had gotten as far as being the candidate opposing him. Trump wasn’t as brash towards Biden as he had been towards Hillary, because he sensed Biden’s fragility. For example, he didn’t call out, 'Lock him up!' like he did to Hillary, though Biden is accused of committing crimes, too", Dr Lieberman told Sputnik.

Both politicians accused each other of corruption during the debate. Trump mentioned reports about documents found on the alleged laptop of Biden’s son Hunter showing that the former vice president had purportedly been involved in "pay-to-play" schemes in Ukraine and China. The Democrat, in turn, pressed Trump on his tax returns and his business ties with China. The accusations could have been a bombshell, but they now seemed tired because of the endless war between Trump and the Democrats, said Dr Roslyn Fuller, director of the Dublin-based non-profit think tank the Solonian Democracy Institute and author of "Beasts and Gods: How Democracy Changed Its Meaning and Lost Its Purpose".

Dr Fuller noted that the two politicians tried to reach their voters instead of actually debating each other, as in the United States "debates aren't so much debates as prolonged infomercials". Both politicians focused on predicting the opponent’s behaviour based on past experience, but a large part of Biden’s and Trump’s strategy was to make the opponent look bad, Dr Fuller explained.

"This is just the typical negative campaigning that the US is a world leader in. Convincing undecided voters on policy is part of the strategy, but suppressing turnout of their opponent or trying to motivate the 'don't vote FOR me, vote AGAINST him' attitude is a huge part of it. Trump's main thread was 'Democrats will ruin the economy' whereas Biden's was 'Trump doesn't care about people", said Dr Fuller.

Commenting on the candidates' performance, Dr Fuller drew attention to Joe Biden’s attempt to "pull off a tough guy image", which "given his age and previous nice-guy persona doesn't really come together for him".

"It is also a serious handicap for the Democratic Party to be running a candidate with such a long record, as it is easy for Trump to use this to highlight previous mistakes and demand why action wasn't taken in the past. It is a strategy that worked for him previously against Hillary Clinton. Trump did a surprisingly good job, with only a few moments of megalomania slipped in, but he received three million votes less than Hillary in the last election and that is a very precarious position from which to be starting. I think a lot will depend on turnout in this election", Dr Fuller suggested.

The debate made clear that Trump will bring continued prosperity, whereas Biden is not up for job, argued Dr Carole Lieberman. She lauded Trump’s calm and restrained manner during the debate, which Dr Lieberman said was beneficial, as it gave Joe Biden "more rope to hang himself - and hang himself Biden did".

"One of the most powerful moments was when President Trump said, 'I ran because of you'. It was clear Obama and Biden’s mismanagement motivated Trump to leave his comfortable lifestyle to 'Make America Great Again'. People who were going to vote for Trump felt excited about how he hit it out of the park. People who were going to vote for Biden were embarrassed, disappointed - and are definitely rethinking their choice. The debate made it easy for undecided voters, since it was clear that President Trump will bring continued prosperity, whereas Biden is not up for the job. Trump described a very bright future - overcoming COVID-19, which appeals more to voters than Biden’s picture of a dark winter ahead”, Dr Lieberman told Sputnik.