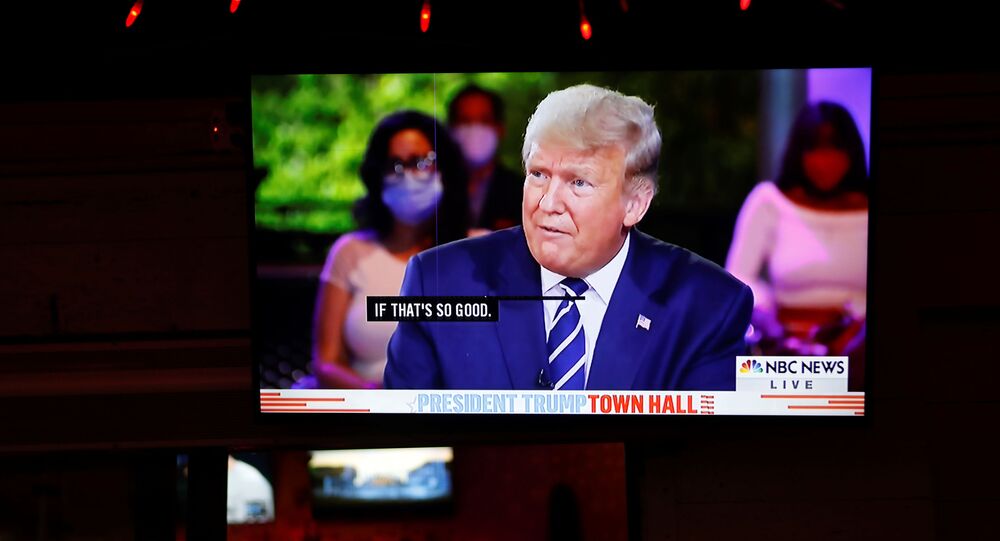 Last week, US President Donald Trump held another nationally televised town hall event, hosted by NBC News moderator Savannah Guthrie. According to the host, the event was attended by a mix of Trump, Biden, and undecided voters. During the event, a woman sitting behind Trump was noted as nodding her head as the president responded to questions.

Mayra Joli, a Miami-based lawyer who went viral recently after she appeared on camera nodding her head in agreement while sitting behind US President Donald Trump during his NBC town hall in Florida, opened up during an interview on Fox News on Wednesday and said that her employees were targeted following last Thursday’s town hall.

Joli, following Trump’s town hall, was dubbed the “the nodding lady” on social media. She was a supporter of former US presidential candidate Hillary Clinton who unsuccessfully ran against Trump in 2016. In recent years, she reportedly became a Trump supporter.

The lady nodding her head agreeing with @realDonaldTrump had to just drive all the Democrats watching insane. 😂😂 pic.twitter.com/Ym8l3MdIi7

Also, I know she's kind of blurry, but I love that this lady is nodding along with everything Trump says 😎 pic.twitter.com/clS7hc85rZ

“The more they trashed him, the more I wanted to find out more about him, and I’ve been supporting him since. The rest is history,” said Joli. “Donald Trump taught me that I cannot just be silent, and I have to think for myself.”

The so-called nodding lady told Fox News that her staff has received phone calls, emails, and social media messages from strangers, as well as family members and friends, allegedly urging them to quit working with the “nodding woman” because of her support for Trump.

“Nobody can call an employer to fire me,” Joli told Fox News. “What they’re doing is calling my employees so they quit. They start sending other [messages] saying, ‘I can’t believe you’re working for that person. I thought you were better’.”

On Tuesday, the lawyer posted on Facebook a screenshot of a message she received that included some personal insults to her.

The lawyer said she is “a fighter” and can stand against a backlash over her political views, “but [my employees] have a private life. They aren’t used to this commotion.”

Joli told the TV station that her business was targeted online, as netizens reportedly posted negative reviews for her law firm on Google.

“Somebody’s going to see that review, then see the career I’ve led helping people, so I don’t need that client,” she said, adding that she would continue to support Trump without the backing of others. Joli said that she had received some messages of support as well.

Joli, an immigration lawyer who immigrated along with her family to the US in the 1990s from the Dominican Republic, said that the US “gave me everything my country couldn’t give me”, stating that she left her home country “because the corruption was larger than the island itself”.

She said that many undocumented immigrants asked her for help to legalize their presence in the US following the imposition of new tough policies on illegal immigration by Trump.

On 15 October, Trump and Democratic presidential candidate Joe Biden held rival town hall meetings; Trump in Miami, Florida, and Biden in Philadelphia, Pennsylvania, after the second presidential debate between the two was canceled due to Trump’s coronavirus disease (COVID-19) infection and his unwillingness to take part in an online debate.

A last Trump-Biden debate - which will be held virtually - is scheduled for Thursday, 22 October, 12 days ahead of the 3 November election.