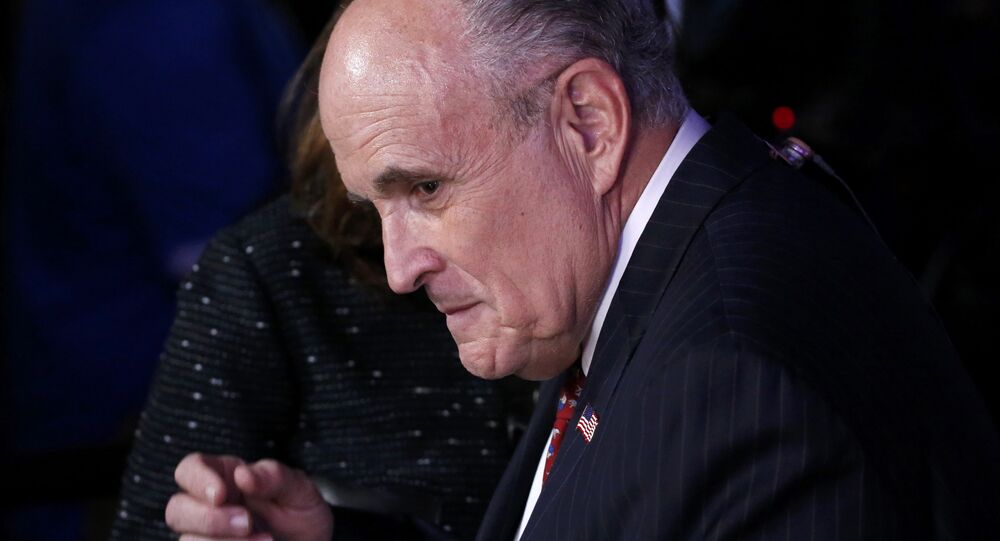 US President Donald Trump’s personal lawyer Rudy Giuliani, once regarded as America’s mayor, is now being accused of possible sexual impropriety after he was caught in a compromising position in the latest installment of the “Borat” movie series.

The Guardian revealed on Wednesday that “Borat Subsequent Moviefilm,” set to premiere on October 23, will include a scene in which Giuliani is interviewed by an actor portraying a “feral child posing as a far-right journalist.”

Following their interview, the actor suggests they have a drink, and the two retire to a hotel room rigged with a number of hidden cameras. Moments later, the actor removes her microphone, and the 76-year-old is then seen “fiddling with his untucked shirt and reaching into his trousers,” while on the bed, The Guardian reported.

Images from the scene have since been posted on social media.

Here's a still from Borat's Giuliani scene. You can thank me later. pic.twitter.com/0gJvLeSrds

Sacha Baron Cohen, who plays Khazkh journalist Borat Sagdiyev, then busts into the room and yells: “She’s 15. She’s too old for you.”

Maria Bakalova, the actor who posed as the 15-year-old and portrays Borat’s daughter in the movie, is actually 24.

However, this is not the first time Giuliani’s involvement in the forthcoming film has made headlines. The 76-year-old told the New York Post in July that he called the cops on Baron Cohen after agreeing to what he believed to be an interview about the Trump administration’s COVID-19 response.

“This guy comes running in, wearing a crazy, what I would say was a pink transgender outfit,” Giuliani said to the New York Post. “It was a pink bikini, with lace, underneath a translucent mesh top, it looked absurd. He had the beard, bare legs, and wasn’t what I would call distractingly attractive.”

The attorney then called the cops, but authorities detailed that no crime had occurred.

“I only later realized it must have been Sacha Baron Cohen. I thought about all the people he previously fooled and I felt good about myself because he didn’t get me,” Giuliani said.

“I am a fan of some of his movies, ‘Borat’ in particular, because I’ve been to Kazakhstan. [Adopting a Borat accent, Giuliani repeats a famous line from the movie:] ‘She is my sister. She is number four prostitute in all of Kazakhstan.’ That was pretty funny,” he concluded back in July.

In a fresh statement addressing the controversial scene, Giuliani tweeted in a Wednesday thread that the “‘Borat’ video is complete fabrication.”

“I was tucking in my shirt after taking off the recording equipment,” Giuliani explained. “At no time before, during, or after the interview was I ever inappropriate. If Sacha Baron Cohen implies otherwise he is a stone-cold liar.”

(4) We are preparing much bigger dumps off of the hard drive from hell, of which Joe Biden will be unable to defend or hide from. I have the receipts.