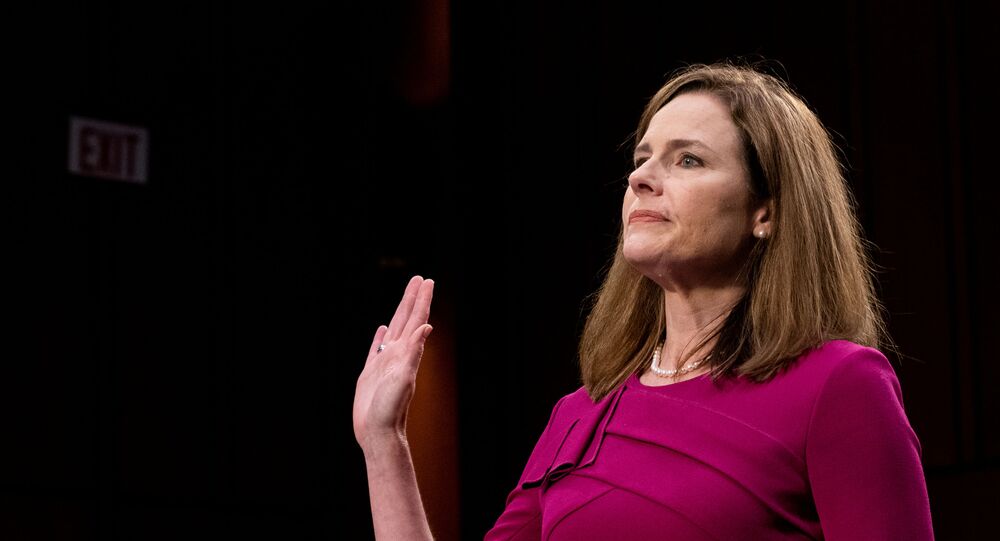 The Judiciary Committee will vote on Judge Amy Coney Barrett's Supreme Court nomination on 22 October, following the confirmation hearings. Observers have explained the Dems' strategy during the questioning marathon and elaborated why it would be hard for Democratic lawmakers to reject Barrett's candidacy.

There were virtually no surprises during the third day of Amy Coney Barrett's Senate Judiciary Committee confirmation hearing as she still declined to speculate upon how she would rule on potential cases despite Democratic lawmakers' attempts to pin her down.

The judge made it clear that she is not "hostile" to the Affordable Care Act (ACA), citing the "severability" doctrine, which can apparently save the law, and comparing it to the game of Jenga. "I am really impressed", Senator Diane Feinstein (D-CA) said in response to Barrett's explanation. When asked about the future of abortion, the nominee emphasised that her moral convictions and religious beliefs do not bear on how she decides cases.

While discussing her legal position on same sex marriage, Barrett stopped Sen. Richard Blumenthal (D-Conn) from pressuring her into giving a "yes" or "no" answer: "You're pushing me to try to violate the judicial canons of ethics to authorise advisory opinions and I won't do that", she said.

It is by no means surprising that Democratic lawmakers returned to such hot-button issues as ACA, also known as Obamacare, and abortion over and over again during the hearings, says Dr Robert Collins, a professor of urban studies and public policy at Dillard University.

It is expected that the GOP may try to overturn Roe v Wade, the US Supreme Court case that legalised abortion in 1973. Likewise, the Trump administration and the Republican Party are seeking to repeal and replace ACA with its own healthcare plan.

Barrett's confirmation would give conservative justices a six to three majority, the professor notes, suggesting that the GOP may instrumentalise this to reach its longstanding goals.

He recalls that Barrett has previously noted that she follows former Justice Scalia's judicial philosophy of reading the text of the US Constitution or of legislation as it is written: "That usually, though not always, results in what would be considered conservative decisions", the professor highlights.

© REUTERS / POOL
Supreme Court nominee Judge Amy Coney Barrett leaves after testifying on the third day of her confirmation hearing before the Senate Judiciary Committee on Capitol Hill on October 14, 2020 in Washington, DC.

Why Judge Barrett is Likely to be Confirmed

However, regardless of the Dems' concerns it would be very hard for them to reject Judge Barrett's nomination, says Miriam J. Ramirez, former Puerto Rican senator and political analyst.

"If they do it’s not going to look well in their own elections for the Senate", she notes. "It would appear as unfair, because she seems perfect for the job".

It was very hard for Senate Democrats to find flaws in the judge's performance and logic, Ramirez notes, citing Barrett's background, education, and experience as a judge.

In addition to this, "she has been able to keep very steady in her answers, has never had a problem with the question, and doesn’t even seem tired of the intense questioning", the political analyst remarks. "She has remained steady in all of her answers, mostly repeating her role as a Supreme Court justice which is to interpret the Constitution".

At the same time, the judge has shown her human side, discussing her family and her children. She even admitted to having a glass of wine after a 11-hour hearing marathon on Tuesday to which Senator Blumenthal wittily replied: "Let me just say, on that kind of point, you have a right to remain silent".

A rare moment of complete bipartisan agreement in the SCOTUS confirmation hearing when nominee Judge Amy Coney Barrett said this: "I did have a glass of wine, I can tell you I needed that at the end of the day." Nodding heads across America. 🍷

​In general, most of the Dem senators have been courteous with her, Ramirez admits, and this comes in stark contrast to how Democratic lawmakers attacked another Trump pick, Judge Brett Kavanaugh, in 2018.

If confirmed, Judge Barrett "will apply the law as written and enforce the text, structure, and original understanding of the Constitution", opines Dr Christopher Metzler, an American political pundit, government strategist, and author.

"Judge Barett will be an important voice on the court which is increasingly dealing with political questions", he stresses. "In fact, I expect that she and other members of the Court will reverse the tendency of the Court of late to take up, in my considered view, political and therefore non-justiciable issues".