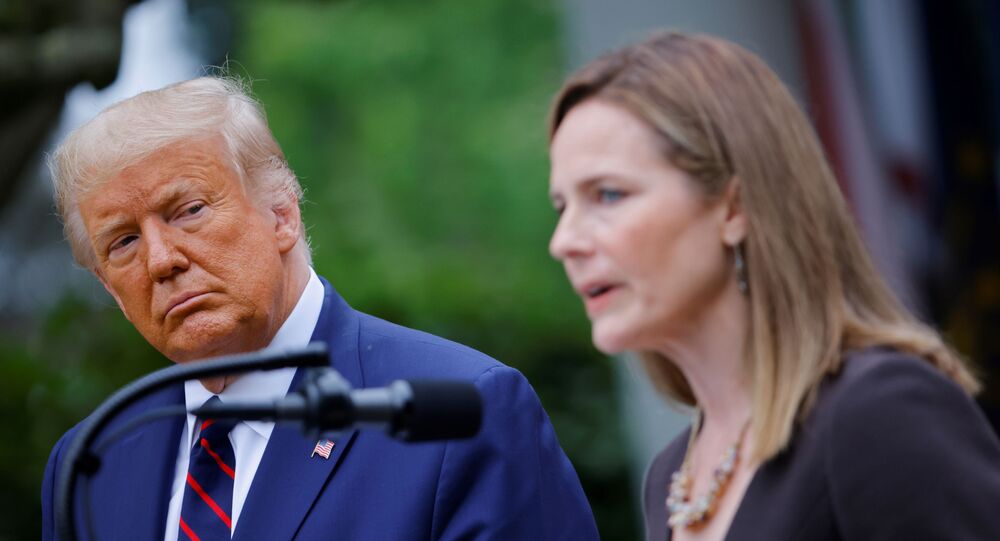 The Senate Judiciary Committee is expected to hold the first vote to approve Judge Amy Coney Barrett's nomination for the Supreme Court on 15 October. While the hearings are underway, American observers have weighed up Barrett's performance as well as how her confirmation could affect the partisan power struggle in the US.

At 9:00 a.m. (GMT-4) on 14 October the Senate Judiciary Committee will host the third day of confirmation hearings for Supreme Court nominee Judge Amy Coney Barrett. Following the eleven-hour questioning marathon that took place on Tuesday, senators will be given 20 minutes each to ask the nominee follow-up questions.

The hearings were preceded by a heated partisan debate over whether or not Donald Trump should pick a candidate for the Supreme Court to fill the place of Associate Justice Ruth Bader Ginsburg who passed away on 18 September. When the president put Barrett's name forward the focus shifted to the judge's alleged conservative and Christian "bias", with the left-leaning media complaining that if confirmed she would "establish a new centre of gravity on the right" within the Supreme Court.

'Judge Barrett is Unflappable in Public'

However, during Tuesday's hearing Judge Barrett declined to speculate as to how she would vote on such hot-button issues as the Affordable Care Act (ACA), commonly known as Obamacare, abortion, or gun rights cases.

"I've made no commitment to anyone, not in this Senate, not over at the White House, about how I would decide any case", Barrett emphasised, making it clear that she would give "no hints, no previews, no forecasts".

"The Senate Judiciary Committee hearings are unfolding just as expected", says Sean D. Foreman, professor of political science at Florida-based Barry University. "Senators on both sides are giving their talking points and volleying back and forth with their ideological concerns while Judge Amy Coney Barrett sits there looking like a pawn in their larger political game".

During the third day of hearings Democrats are likely to continue to object to Trump's pick based on their perceived conclusions about the judge's positions on the healthcare law, abortion, and gay rights policies, according to the professor.

"Judge Coney Barrett is unflappable in public and will continue to maintain that composure even when the unfair questions come from Democrats through this week", he highlights. "The hope among the American public is that these hearings do not devolve into a major political 'food fight' in the way that the hearings for Bret Kavanaugh did".

Durbin, Klobuchar, Coons and Booker looked ACB in the eye and had really interesting give and take. Was what advice and consent was supposed to be. Harris was wooden and incapable of getting thru 30 minutes without a script.

​To date, Judge Barrett has been "able to navigate through a hostile Democrat-led inquisition", opines Gavin Wax, a New York-based conservative political commentator, stressing that "the Democrats and their media cronies have resorted to attacking her attire as all other avenues to discredit her have failed".

Last month, Boston University Professor Ibram Kendi even went so far as to allege that white people are using their adopted black children as props in an apparent reference to Barrett's son and daughter – adoptees of Haitian origin.

Some White colonizers "adopted" Black children. They "civilized" these "savage" children in the "superior" ways of White people, while using them as props in their lifelong pictures of denial, while cutting the biological parents of these children out of the picture of humanity. https://t.co/XBE9rRnoqq

​The issue was raised at the Tuesday hearing with the judge denouncing the "accusations like that" as "cruel" and highlighting that they hurt her children who had been made part of her family.

What are the Possible Consequences of Barrett's Confirmation?

Assuming Amy Coney Barrett is confirmed, there will be three "liberal" judges and six "conservatives" on the Supreme Court bench, notes Neal Devins, a professor at the William & Mary Law School.

"Democrats complain that the Barrett nomination is foul play, for the Republican Senate would not consider President Obama's 2016 nomination of Merrick Garland", he says. "Some Democrats think that four seats should be added to the Court as a way of counteracting Republican shenanigans".

The "court packing" issue has already deepened divisions along partisan lines, according to Devins who believes that this state of affairs may result in the Supreme Court losing its legitimacy in the eyes of the American people.

"The Court will be seen in strictly partisan terms and the line separating law from politics will be obliterated", he presumes.

Democratic lawmakers' arguments concerning the alleged "foul play", as well as that Republicans are "rushing" the nomination, and that holding hearings regardless of COVID-19 is "endangering lives", are irrelevant, according to Paul Valone, a political commentator and executive director of Rights Watch International.

"We are witnessing a power struggle between those who want a Supreme Court which will strictly interpret the law as written, and those who want an activist judiciary to reshape America using the socialist model", he says, suggesting that "the results of the Barrett appointment and, following it, the US election, will chart whether America remains a constitutional republic".

This is a critical moment in the conservative movement, deems David McCuan, a political science professor at Sonoma State University: "Conservatives have argued that losing the war - the November 2020 presidential election - is worth it if the victory is the US Supreme Court and solidification of a conservative majority for a generation or more", he alleges.

BARRETT: "I interpret Constitution as a law and I interpret its text as text, and I understand it to have the meaning that it had at time people ratified it. So that meaning doesn't change over time and it's not up to me to update it or infuse my own policy views into it." AMEN!

​Judge Barrett represents the next generation, next level of thinking for the future of conservatism in America which extends beyond jurisprudence and legal theories of textualism and originalism, according to McCuan.

National Review, a conservative American editorial magazine, suggested that Amy Coney Barrett is "not just a conservative", but "something else", given that she does not belong to the established conservative elites who studied at Princeton, Harvard, and Yale.

"Amy Coney Barrett went to Rhodes College, a small, Southern Presbyterian institution, before moving on to Notre Dame", the magazine writes. "Her ascent is a rejection of the laws of our hardening class divisions".

In this way, Barrett's confirmation could become "generational in impact" and "a tipping point", McCuan believes, suggesting that "how the [Supreme] Court deals with questions of liberty versus equality, privacy, order versus freedom, individualism versus shared norms - all key elements of the American political experience - will be framed by this addition to the court".