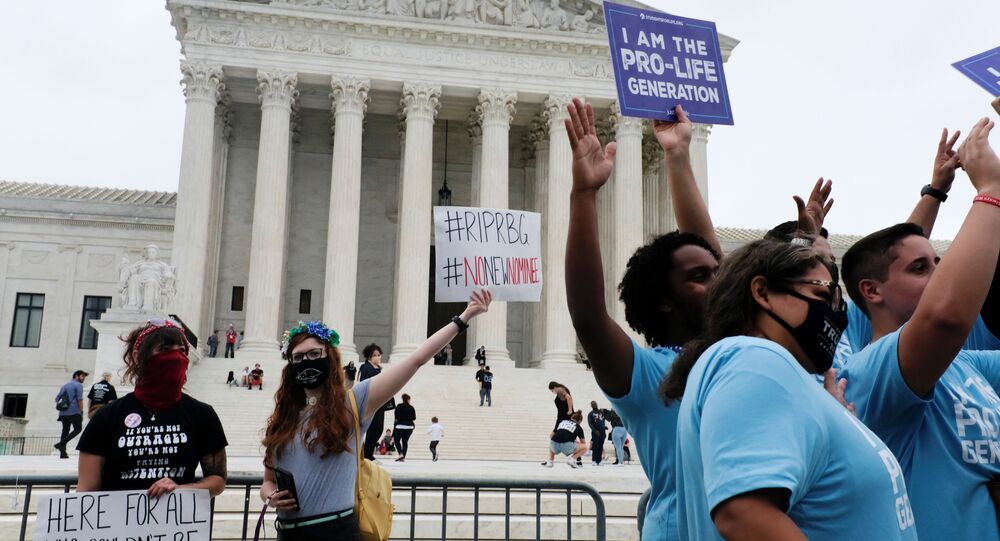 On Sunday, President Trump accused “Radical Left Democrats” of pushing Joe Biden to ‘pack’ the Supreme Court (i.e. increase the number of justices from 9 to as many as 15), and warned that doing so would “permanently destroy the Court.” Biden has refused to answer whether he would pack the court, saying voters “don’t deserve” to know his stance.

The Joe Biden-Kamala Harris strategy of refusing to answer directly whether or not they would increase the number of Supreme Court justices if elected makes sense, because it’s not an issue that most Americans care about, and could alter the behaviour of the Court’s majority of conservative justices, University of California Irvine professor of political science and law Dr. Charles Anthony Smith believes.

“To understand how this question about adding additional seats to the Supreme Court has come up, you have to understand what US voters think about the Court. Overwhelmingly, the Court is not a driver of political concern for most Americans. However, it matters a great deal to the anti-abortion people and the gun lobby and their constituents. So threats of future court packing by a Democratic administration have less to do with concern over the issue - because very few Americans care one way or the other - and have a great deal to do with increasing Republican voter turnout,” the academic says.

© Photo : C SPAN
80s Rewind: Watch Joe Biden Call Court-Packing ‘Terrible, Terrible Mistake to Make’
Recalling President Franklin Roosevelt’s failed 1937 attempt to legislate an expansion in the size of the Supreme Court, which Biden himself has criticized in the past, Dr. Smith argues that the “lesson” for the Democratic candidate from that attempt is that the mere threat to change the size of the Court may be enough of a motivator to stop conservative justices from seeking to undermine his administration.

“[Biden and Harris] are much better off from a strategic interaction with the Court standpoint to remain vague and never say they would not under any circumstances add justices,” the professor explains. “Since most of the public doesn’t care about the issue and the public that does care will be voting Republican over other issues…then there really isn’t a good reason for Biden/Harris to answer the question!”

After the death of Bill Clinton-nominated Supreme Court justice Ruth Bader Ginsburg last month, the Court was left with eight justices, five of them nominated by Republican presidents, and two by Democrats.

After Ginsburg’s death, Democrats demanded that Trump hold off on nominating a replacement until after the November vote. Trump and the Republicans countered, saying they have the constitutional right and duty to select a replacement as quickly as possible, despite previously blocking President Obama’s nominee for nearly a whole year in 2016, citing the fact that it was an election year.

Democrats Gave Republicans Argument They Need Against Court Packing in 1937

Dr. Richard Friedman, a professor at the University of Michigan Law School and specialist on the history of the Supreme Court, says “the trouble with packing, of course, is that if one side can do it, the other can when it is in control.” This, in his view, has the potential to severely impair the Supreme Court’s independence.

“I think the 1937 incident will play large if Democrats attempt to pack the Court,” Friedman said in an interview, recalling the failed Judicial Procedures Reform Bill proposed by President Roosevelt.

According to the professor, Republicans will be able to use the comments from the report of the Senate Judiciary Committee of the time, which he recalled was “was dominated by members of Roosevelt’s own party,” and which stated that the proposal to increase the number of justices “is a measure which should be so emphatically rejected that its parallel will never again be presented to the free representatives of the free people of America.”

“I do think there is a difference between this time and 1937. Here court-packing would not be initiated because of upset at decisions of the Court, but because of anger at what is perceived to be unfair, norm-breaking conduct by the Republicans (I suspect the Democrats would have done the same had the situation been reversed, but that is another matter)…And if the Democrats did pack the Court, I’d suggest they unpack it at the same time – that is, if they add two seats, they should say the next two vacancies would not be filled, so the number would eventually revert to nine again. I don’t know if that would make enough of a difference, either, but it would make clear that the packing was only meant to compensate for the Republicans’ conduct,” Friedman concludes.

What, When & Where: Amy Coney Barrett Supreme Court Confirmation Hearing to Kick Off in US Senate