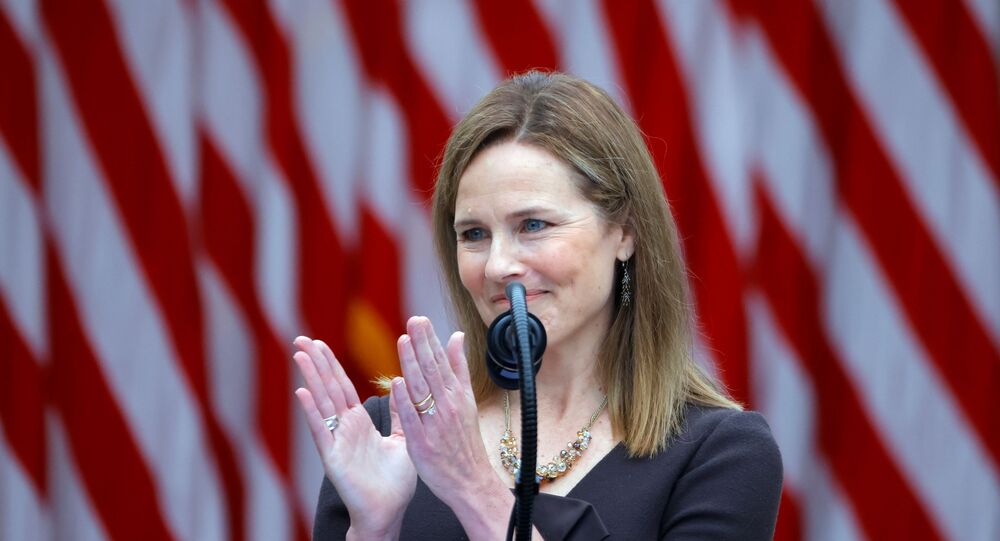 Republicans who control the Senate are rushing to put 48-year-old Barrett on the Supreme Court before the November 3 elections, as if Joe Biden takes the White House and Democrats were to gain seats in the Senate then it would become harder to confirm Barrett.

Supreme Court nominee Amy Coney Barrett is set to tell senators during her confirmation hearing on Monday that while she has been nominated to fill Justice Ruth Bader Ginsburg’s seat on the bench, 'no one will ever take her place', according to the Associated Press which has reportedly seen a copy of her remarks.

In Monday's opening statement, Barrett will say that courts “should not try” to make policy, leaving those decisions to the political branches of government.

Barrett will also say that she has never let the law define her identity or crowd out the rest of her life. She says a similar principle applies to the courts, which are “not designed to solve every problem or right every wrong in our public life.”

© Sputnik /
Trump Nominates Amy Coney Barrett to Fill US Supreme Court Seat of Late Justice Ginsburg
Barrett says she has resolved to maintain the same perspective as her mentor, the late Justice Antonin Scalia, who was “devoted to his family, resolute in his beliefs, and fearless of criticism.”

Republicans who control the Senate are rushing to put 48-year-old Barrett on the Supreme Court before the November 3 elections, as if Joe Biden takes the White House and Democrats were to gain seats in the Senate then it would become harder to confirm Barrett.

Barrett would be Trump’s third Supreme Court justice after Neil Gorsuch in 2017 and Brett Kavanaugh in 2018.

A devout Catholic, Barrett has never ruled in a case directly challenging the high court’s landmark 1973 Roe v. Wade Supreme Court decision to legalize abortion across the country. Abortion advocates, however, have claimed that her appointment could put that decision at risk of being overturned. If Barrett is confirmed as the new Supreme Court justice, she will be one of six Catholics on the bench.

In a 1998 Marquette Law Review article she said the church’s views on prohibiting abortion and euthanasia were “absolute” because they “take away innocent life.”

© REUTERS / CARLOS BARRIA
'Glorious ACB': Who is Amy Coney Barrett, Trump’s Supreme Court Nominee?
Barrett has also taken conservative positions against gun control and immigration that are in line with those held by President Trump.

Coney Barrett was born in Louisiana and attended Rhodes College, in Memphis, Tennessee, as an undergraduate. She went to law school in Indiana, at Notre Dame, on a full scholarship. She’d be the only justice on the current court not to have attended either Harvard or Yale for law school.

Barrett was a law professor at Notre Dame for 15 years before Trump nominated her to become a federal appeals court judge in 2017.