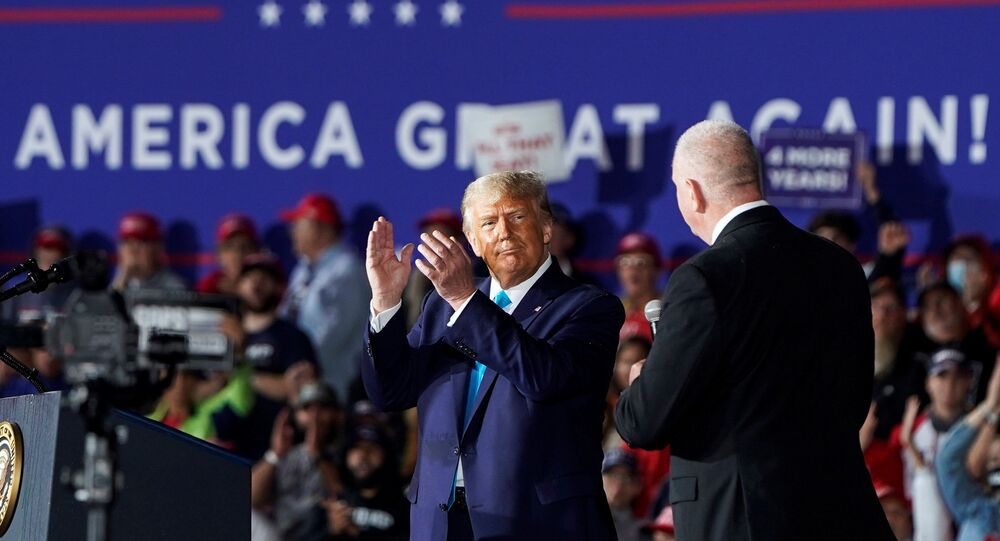 A US police news website has become the latest law enforcement group to back US President Donald Trump's re-election campaign.

"This year, for the first time, Law Enforcement Today is proud to make our first ever endorsement for president—Donald J. Trump," LET spokesman Kyle Reyes wrote. "From our perspective, there’s no other choice."

"As cities across America suffered violent riots, the president was out there offering the full support of federal resources to put down the violent riots — all mayors and governors had to do was ask," he wrote.

In June, Biden's campaign said the former vice-president "does not believe that police should be defunded," a statement he repeated in person during last week's presidential debate in Cleveland, Ohio.

But Reyes pointed to his statements in favour of "redirecting" funds or "re-imaging" policing in the US as part of a programme of reforms.

© AFP 2020 / ELSA
MMA to the Rescue: UFC Fighter Teaches US Police Officers to Detain Suspects Using Jiu-Jitsu
And Reyes highlighted a July statement from the Unity Task Force of Biden's and Democratic left-winger Bernie Sanders's campaigns which included a call to "reimagine policing for the benefit and safety of the American people."

He contrasted that with a quote from BLM co-founder Melina Abdullah, who said: “It’s important that as we say, ‘defund the police,’ we understand that it’s coupled with a reimagining of public safety.”

"We are unapologetic for our support of law enforcement and are outraged by the way police are being treated in the wake of one police officer’s egregious conduct," Reyes wrote in an apparent reference to the death of black man George Floyd on 25 May as Minneapolis police office Derek Chauvin knelt on his neck.

The recommendations of the Unity Task Force also included ending the qualified immunity that law enforcement agencies enjoy against lawsuits, restricting police powers to confiscate assets from criminals and ending the transfer of surplus military equipment to police departments.

Reyes said those transfers include body armour that police departments may otherwise not afford, and pointed to Biden's claim: "They don’t need that. The last thing you need is an up-armored Humvee coming into a neighborhood just like the military invading.”

Reyes also slammed the Democrats' proposal to form an unarmed "civilian corps of first responders," arguing it would divert funding from existing law enforcement and "put civilians in harm’s way, where police would then be responsible for bailing them out of trouble."

In July the National Association of Police Organizations endorsed Trump, after backing Biden as former president Barack Obama's running mate in 2008 and 2012.