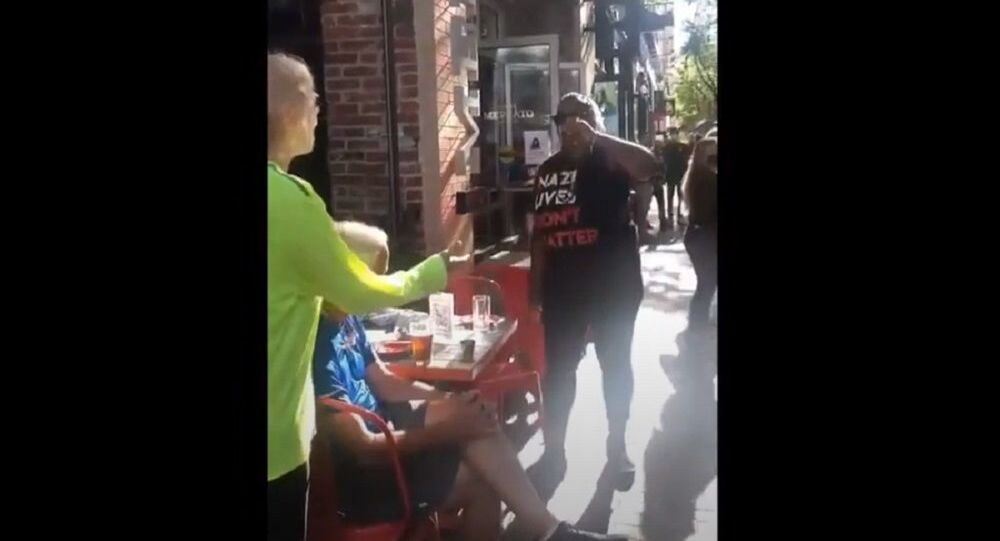 Amid the ongoing anti-racism demonstrations sweeping the US, footage from Pennsylvania over the weekend showed a group of protesters accosting white diners before one protester appears to swipe an elderly couple's beer.

US President Donald Trump weighed in on viral footage of a recent incident from Pittsburgh, Pennsylvania, where Black Lives Matter (BLM) protesters are shown in an altercation with diners in a Pittsburgh restaurant.

BLM Protesters horribly harass elderly Pittsburgh diners, scaring them with loud taunts while taking their food right off their plate. These Anarchists, not protesters, are Biden voters, but he has no control and nothing to say. Disgraceful. Never seen anything like it. Thugs!

​Footage from the anti-racism demonstrations in Pennsylvania over the weekend appeared to show the group of people shouting expletives at diners on Saturday, with one protester seemingly grabbing an elderly couple's beer and drinking it.

Here is what Joe Biden voters are doing to your peaceful, elderly population pic.twitter.com/sjKoXZs4lz

​“F**k the white people that built the system,” one demonstrator could be heard yelling at the patrons.
Some of the diners are then seen grabbing their belongings and leaving. A second video shows demonstrators smacking a white cyclist.

No arrests were made during Saturday’s protests.

Pittsburgh Police have said they are reviewing the video to determine subsequent actions, and US Attorney Scott Brady called the incident “unacceptable”, vowing to work closely with police “to identify and hold these provocateurs accountable,” local ABC affiliate WTAE-TV reported.

Similar scenes have played out across the US recently, in response to several black Americans dying in police custody.

The most recent wave of protests was triggered after footage of the death of Daniel Prude in Rochester, New York in March was widely viewed online.

© REUTERS / BRENDAN MCDERMID
Demonstrators hold signs reading "Black Lives Matter" during a protest over the death of a Black man, Daniel Prude, after police put a spit hood over his head during an arrest on March 23, in Rochester, New York, U.S. September 6, 2020.

Video of body camera footage showed police officers approaching Daniel Prude who was running naked through the streets at night, after his family had called 911 to report he was going through a mental health emergency.

According to the video, Prude initially complied with police orders, but after being handcuffed began shouting and spitting.

After officers placed a spit bag over his head and pinned the man to the ground, he appeared to go lifeless minutes later.  According to Prude’s family, he died of asphyxiation on 30 March.

Mass-scale protests against police brutality, some of which have turned violent and resulted in arson, looting, and clashes with heavily armed police have been ongoing in the US since the death of African American man George Floyd at the hands of a white policeman in Minneapolis in May.