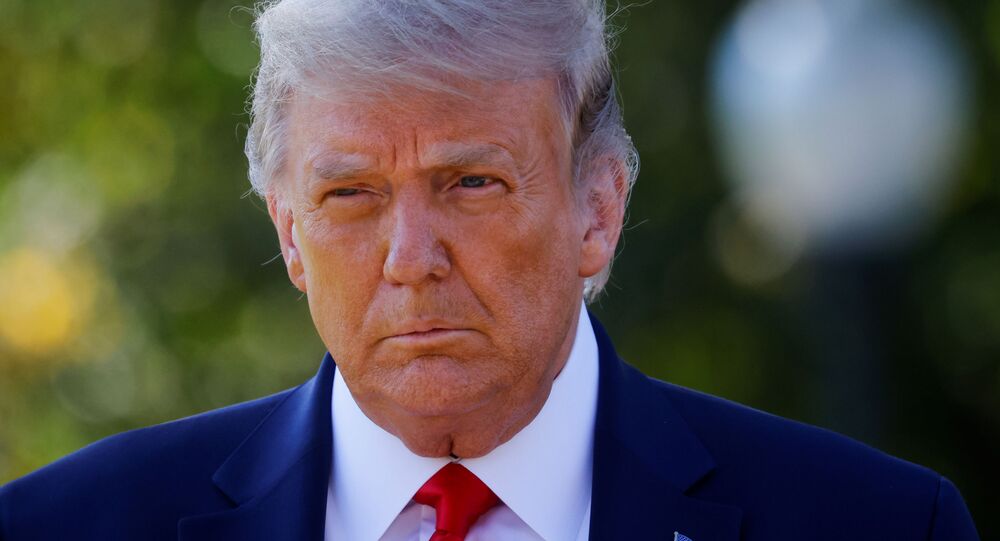 The New York Times' report on Trump's tax returns has missed a number of its apparent targets failing to implicate the president or find his alleged ties to Russia, says Wall Street analyst Charles Ortel, adding that those who leaked Trump's financial data may face criminal charges and civil damages.

The leaker or leakers who handed Donald Trump's tax returns to The New York Times may have committed a felony, writes Just the News, a US national news agency founded by American investigative journalist John Solomon.

The NYT disclosure came amid the Democratic lawmakers' longstanding effort to obtain Donald Trump's tax returns which is seen by the president's proponents as a "fishing expedition" aimed at disrupting his presidency and the 2020 campaign, along with the "Russia collusion" story and an attempt to impeach him.

'The Leaking is a Crime'

In a note to the NYT's "bombshell" article in question, the newspaper's executive editor Dean Baquet insisted that the president's tax information "was legally obtained by reporters", adding however, that they are not making the records themselves public because they "do not want to jeopardise our sources, who have taken enormous personal risks to help inform the public".

"Under federal and state laws, income tax returns are confidential", stresses Wall Street analyst and investigative journalist Charles Ortel. "The rationale is they normally contain extensive amounts of information that filers would not want shared either with the general public or especially with competitors and political rivals".

Citing Joseph diGenova, a former US Attorney for the District of Columbia, Just the News noted last Friday that if the documents were obtained by an IRS employee, a lawyer or an accountant, the leaking "definitely" constitutes a crime that could result in both criminal and civil legal actions.

In particular, Internal Revenue Code, Section 6103, protects an individual's tax return information from disclosure to other parties by the IRS. In addition, 26 US Code § 7213 says that it's a felony if any officer or employee of the United States discloses unauthorised information, including tax returns.

"It is unlikely that Trump or any family member leaked income tax information to the New York Times", Ortel suggests. "However, it's possible that disgruntled staff at a law firm or accounting firm may have done so. If true such actions would likely carry criminal penalties, and civil damages.".

Another possibility, more likely, is that federal or state government officials may have leaked this sensitive information to the paper, according to the investigative journalist.

"If true, this would be deeply concerning not simply to Trump and his supporters but to most sensible Americans", he warns.

Kevin Brady (R-TX), the top Republican on the House Ways and Means Committee, shares similar concerns. On 28 September, he issued a statement regarding the NYT's story on Trump's tax return raising the alarm over "the prospect that a felony crime was committed by releasing the private tax return information of an individual" and calling for an investigation into the matter.

© REUTERS / JOSHUA ROBERTS
U.S. President Donald Trump walks from Marine One as he returns from Bedminster, New Jersey, on the South Lawn of the White House in Washington, U.S., October 1, 2020.

One might ask as to whether taking these "enormous personal risks" and leaking the president's tax returns was worth the pain. In other words, did the NYT disclose something really "damning" about the president? According to Ortel, nothing of that kind was reported by the newspaper.

While the media's story is largely focused on Trump's alleged tax avoidance, it is not a crime to offset losses incurred against income, the Wall Street analyst underscores.

"Moreover it is common to use options available in relevant jurisdictions to make one claim about the value of a given asset and a different one in a loan application", he says. "In every case, Trump and his organisation certainly will have worked closely with professionals to make sure that all claims were reasonable and defensible".

Apart from this, Ortel doubts that a team of New York Times reporters have conducted a thorough and accurate analysis of the president's documents.

"For a filer like Donald Trump, engaged in so many activities inside the US, tax returns are certainly lengthy and so complicated that professional firms likely are involved in submitting them, including accountants and lawyers", the Wall Street analyst underscores.

As for left-leaning mainstream media's claims that "Trump’s tax avoidance is a tax on the rest of us", they have apparently overlooked the fact that "generations of Trumps employed thousands of New Yorkers directly and indirectly producing incomes and spending that filled tax coffers at federal, state, city and county level", as Ortel noted in his 29 September opinion piece for The American Thinker.

"So, a fair accounting of all tax revenues created by the Trump Organisation likely will show enormous positive impact overall", the analyst believes.

What Did NYT Reporters Fail to Find?

Still, it's more important what the NYT "did not find", i.e. any proof of Trump's alleged "collusion" with Moscow which the Dems are continuing to speculate about even though Special Counsel Robert Mueller dug up no evidence to back these assumptions, the analyst notes.

In response to Trump's unwillingness to release his tax returns after assuming the Oval Office, MSM observers suggested that the documents may show income from Russian sources or debt owed to Russians which potentially could make the president vulnerable to Moscow's "influence".

On 10 July 2020, Elaine Kamarck of the Brookings Institution insisted that "once in office, Trump proceeded to do things that raised suspicions about his relationship with Russia". She claimed that there is no other way to answer whether the president "has been propped up by Russian money" than making his tax returns public.

However, the NYT's review of the president's financial documents has apparently hammered the final nail into the Dems' "Trump-Russia collusion" story, according to Ortel: "Mueller and the New York York Times have failed to produce any evidence of Russian support, state or otherwise, to the Trump political campaign or enterprises", he stresses.

"The decision to target Trump for theoretical illegal links to Russia clearly seems to be 'gaslighting' - bleating these scurrilous charges to distract from actual corruption involving a host of foreign powers going all the way back to Bill Clinton's days as Arkansas governor forward to the present", Ortel says referring to the "pay-to-play" scheme allegedly established by the Clinton Foundation.

Trump's tax returns leak bears some resemblance to what happened to Richard Nixon in 1973: nearly two years ago Politico referred to a scenario in which the president could be forced to release his tax returns.

"Disclosing confidential tax information is a felony", the magazine wrote on 23 December 2018. "If Democrats can’t release Trump’s returns publicly, then they can’t discuss anything they see in them without putting themselves in legal jeopardy".

The media outlet recollected that in 1973 The Washington Post and The New York Times launched a series of reports raising the question of whether President Nixon "grossly underpaid" what he owed the government.

In October 1973, the Providence Journal-Bulletin obtained Nixon’s tax returns, and released a "blockbuster report" indicating that the president paid just $792.81 in federal income taxes in 1970 and $878.03 in 1971. Nixon submitted to media pressure and agreed to make his tax returns public to restore "the confidence of the American people in the integrity of the president". However, it did not help Nixon much amid a series of scandals which prompted him to resign on 9 August 1974 in the middle of his second term.

So, will the NYT article about Trump's tax records affect the president in the same way and force him to publish his returns to clear the air before the election? If this was the trick it did not work, according to Ortel.

"I suspect he will not release any tax return information until, at the earliest, after the election", the Wall Street analyst presumes. "This decision will further enrage Never Trumpers, but not lessen the enthusiasm that his base has to win re-election for Donald J. Trump".