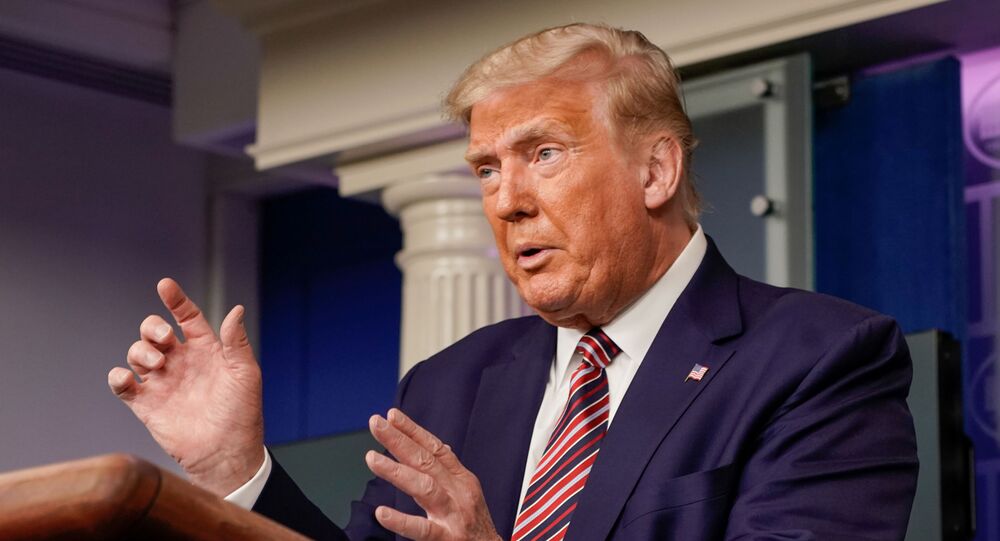 Earlier in the day, The New York Times reported that US President Donald Trump's tax bill was $750 in 2017, a year after he became president. According to the report, he "paid no federal income taxes in 11 of 18 years".

US President Donald Trump, when asked about his tax history during a Sunday press briefing, after it had been revealed by a NYT report to be just $750 in 2017, claimed that The Times report was "totally fake news".

"That's fake news. Actually I paid tax and you will see that as soon as my tax returns [are released.] They are under audit. The IRS [Internal Revenue Service] doesn't like me", Trump said, commenting on The NYT allegations.

Trump also said that he has 108 pages of filings of tax returns and he is waiting to have it released.

"We went through the same stories, you could have asked me the same questions four years ago, I had to litigate this and had to talk about it", US President said.

​His remarks came after a report in The NYT was published, saying that Trump's tax bill was only $750 in 2017, a year after he became the US president. The report also claimed that he "reduced his tax bill with questionable measures, including a $72.9 million tax refund that is the subject of an audit by the Internal Revenue Service".

The report also detailed that has Trump avoided paying taxes for the past two decades, having paid "about $400 million less in combined federal income taxes than a very wealthy person who paid the average for that group each year".

According The New York Times, Trump had received a $72.9 million tax refund, which reduced his total federal income tax bill between 2000 and 2017 to an annual average of $1.4 million. The IRS is still investigating the legitimacy of that refund, the newspaper said.

The president has been long opposed to allowing his tax history to be publicly available, labeling the calls for him to reveal his tax records "a continuation of the most disgusting witch hunt in the history of our country".