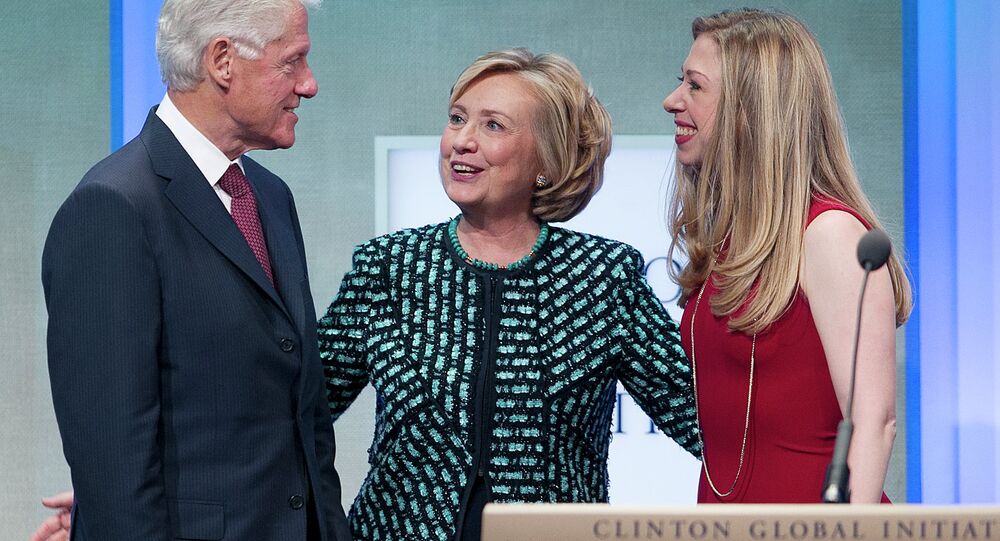 On 24 September, The New York Times broke the story that US Attorney John Durham, appointed by Attorney General William Barr to conduct a probe into the handling of the Trump-Russia investigation, also sought information about the FBI's Clinton Foundation inquiry. Wall Street analyst Charles Ortel explains Durham's focus on the charity.

According to the newspaper, Durham tried to find out how law enforcement officials handled an investigation into allegations of political corruption at the Clinton Foundation.

The media outlet further argued that the US attorney's focus on the Clintons raises questions about the scope of the prosecutor's review: "The approach is highly unusual, according to people briefed on the investigation", the NYT wrote, suggesting that the alleged infractions themselves are not comparable, and largely included different teams of investigators and prosecutors.

The newspaper article, titled "In Politically Charged Inquiry, Durham Sought Details About Scrutiny of Clinton", appeared to some to be aimed at marginalising Durham's probe and depicting it as a biased fishing expedition, noted Wall Street analyst and investigative journalist Charles Ortel, adding that the NYT opinion piece apparently produced the opposite effect.

"The NYT piece is significant in that the Clinton Foundation, according to their reporting, confirmed it had received a subpoena and complied fully with its terms", Ortel explains. "Subpoenas are issued in connection with criminal proceedings, once a grand jury has been convened. We do not yet know when a criminal probe may have been launched, what crimes are being alleged or what parties may be targets. But we do know that Durham has been advancing criminal proceedings and that these involve the Clinton Foundation".

So, what crimes might the Clinton Foundation have committed?

According to Ortel, who has for several years been conducting a private investigation into allegations of fraud by the charity, "a close examination of Arkansas, New York, and federal law reveals that Bill, Hillary & Chelsea Clinton Foundation is not a lawfully organized nonprofit corporation of the specific type – a public charity – intended and approved as tax-exempt by the IRS on 29 January 1998".

"This critical fact should have been discerned by February 2001, when the FBI, IRS, and US Attorney for the Southern District launched an 'investigation' into Bill Clinton, Hillary Clinton, William J. Clinton Foundation and public corruption", he said. "In September 2001, Bob Mueller became head of the FBI, and in early January 2002, James Comey became US Attorney for SDNY. These folks 'investigated' the Clinton Foundation for four years but failed to spot obvious frauds. There was no lawfully operated or organised charity. There were no legally required audits. And the nonprofit never registered or reported to NY state as certainly was required".

In regards to Durham and Clinton Foundation investigation..I'm told some questions being pursued are: Who gave the Foundation money and how much (foreign countries/otherwise)? Did the Foundation underreport the amounts? Where did the money go? Also James Comey's name comes up

​The Wall Street analyst suggests that, unlike two former FBI chiefs – Robert Mueller (who led the Trump-Russia probe between 2017 and 2019) and James Comey (who supervised Hillary Clinton's email inquiry between 2015 and 2016) – John Durham "certainly [had] resources to see [the] full contours of this long-running criminal enterprise, masquerading as a charity since 23 October 1997".

"That the New York Times 'missed' this story despite my personal warnings to reporters there starting in 2015 tells you just how partisan they remain", Ortel suggests. "Intended to belittle Durham, this piece actually heightens voter interest in bringing the Clintons and their allies to Justice".

In addition, the NYT article has turned the spotlight on the fact that although a team of four FBI operatives had certain concerns about the Clinton Foundation in 2016 and sought to subpoena the charity, top DOJ criminal division officials denied the request.

"This is confirmation of earlier reporting by Sharyl Attkisson that four FBI offices had active investigations into 'The Clinton Foundation' in 2016, only to be denied subpoena power by persons inside the Justice Department", says Ortel.

According to the analyst, it is possible that Andrew Weissmann, then chief of the Fraud Section Criminal Division, may have been responsible for denying the subpoena request in 2016.

Did Andrew Weissmann deny the subpoena? In 2016 he led the Fraud Section.@adamgoldmanNYT -any idea? pic.twitter.com/zxK1XhNSqm

​Ortel observes that Weissmann was one of Robert Mueller's top deputies in the special counsel's Trump-Russia probe, and whose phone turned out to be wiped clean twice before being handed over to DOJ Inspector General Michael Horowitz. Weissmann is also an author of the book "Where Law Ends: Inside the Mueller Investigation" which is due out on 29 September.

"It will be interesting to see what his book, due out 29 September 2020 may say or not say concerning the stymied Clinton Foundation during and after 2016", Ortel remarks.

The Durham probe into the origins of the Crossfire Hurricane investigation into the Trump campaign has long been perceived as "politically charged" by Democrats. On 18 September, four Democratic House committee chairs called upon IG Horowitz to kick off an "emergency investigation" into whether AG Barr and Durham are involved in actions that could "improperly influence the upcoming presidential election".

"Few actions would prove more damaging to public confidence in the integrity of the DOJ and our democratic process than the perception that federal prosecutorial power can be used to prejudice a pending investigation or influence an upcoming election," Democratic lawmakers noted in their letter to Horowitz.

Horowitz is an Inspector General, so his role is circumscribed, compared to that of Barr or of Durham, says Ortel, explaining why the inspector general is unlikely to prevent possible exposure.

"I believe Durham's work has profound political implications, but that he and his team are fighting against crime and not for any political candidate", the Wall Street analyst says. "Moreover, the crimes connected to 'The Clinton Foundation' that I see clearly involve prominent figures in both political families who seek to obstruct investigations into dynastic political families including Bush, Clinton, and Obama".

According to the investigative journalist, those used the 2016 primaries to assist Hillary Clinton to become the nominee and believed that she would handily trounce Donald Trump are now trying their best to return to power.

"These people want a stooge they can control and fear the current president and his independent band of brothers and sisters", Ortel offered, adding, that "truth is coming out, and a true accounting nears".