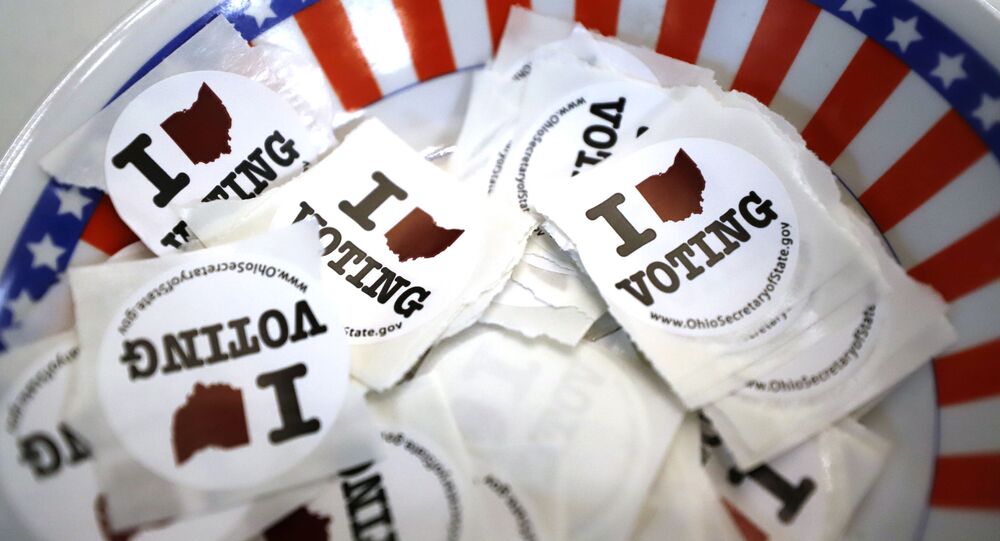 If US Presidential Candidate is Incapable of Taking Part in November Vote, What Happens Next?

Less than five weeks before the US presidential vote, Donald Trump, who is striving for re-election, has contracted coronavirus, sparking a wave of speculations about what will happen in the November poll if he is unable to carry on with his presidential campaign - or if something similar happens to his 77-year-old opponent.

Speaking from Walter Reed Military Medical Center on Saturday, US President Donald Trump underlined that he feels “much better” after beginning his anti-COVID-19 treatment and is “looking forward to finishing up” his presidential campaign.

While the White House maintains that the president is doing “very well” and is not planning to lay down his re-election ambitions, his illness has sparked debates about the future of the 3 November vote should Trump be unable to carry out his duties as a candidate.

Trump is not the first world leader to have contracted coronavirus. The list includes British Prime Minister Boris Johnson and Brazilian President Jair Bolsonaro. However, the American election system often sounds like a rocket science to many, so here is a brief explanation as to what could happen if any of the presidential candidates becomes incapacitated before or shortly after the election date.

If Anything Happens to the Candidates Before the November Poll

First of all, it’s actually very unclear about what could be done with the votes that have already been cast - either for Trump or Biden - prior to 3 November.

According to the daily updates of US Elections Project at the University of Florida, more than three million Americans have already taken part in early voting across the country.  Due to the coronavirus pandemic, election authorities have also sent out mail ballots to voters in two dozen states - a practice that has been slammed by President Trump as potentially “fraudulent”.

© AFP 2020 / EMMANUEL DUNAND
Netizens Get Creative as Twitter Warns Posts Wishing Death on COVID-Positive Trump Will Be Scrapped
Although the Republican National Committee and the Democratic National Committee both have procedures to establish a replacement nominee, in practice it would be very complicated if not impossible to do so in time for Election Day. The deadline to make changes to the ballots has already passed in the majority of states. So, it would entail a really tricky and prolonged legal battle to try and retract the ballots in a bid to change the names of the candidates on them.

Can the Election Be Postponed?

This has never happened in US history. Since 1845, the law has proclaimed that the election should be held every four years on "the Tuesday next after the first Monday in the month of November," effectively between 1 and 8 November. The US Congress has the power to determine the date but it’s unlikely that the Democratic-control House of Representatives would support the idea of any possible postponement, as House Speaker Nancy Pelosi has already clearly come out against the idea.

If the elections are not postponed and votes are still counted towards a candidate who is unable to carry on, there is still the Electoral College to navigate.

Under the US Constitution, the 536-member body has to determine the next president – in practice, by selecting the winner of the state’s popular vote. A majority of 270 electoral votes is required to win the electoral college.

© REUTERS / Bryan Woolston
A voter completes his ballot on the day of the primary election in Louisville, Kentucky, U.S. June 23, 2020
If the candidate dies before the electors meet on 14 December, some states, like Indiana, would rather support the party’s replacement. But the law is obscure for the majority of US territories and could easily be challenged by the opposing party, analysts believe. In Michigan, for example, electors are still bound to support the winner of the state election – whether he or she is alive or not.

And if Something Happens Before the Inauguration?

The US Constitution’s 20th Amendment proclaims that if anything happens to a presidential candidate before the Inauguration, the vice president-elect will temporarily replace the president-elect. However, the results of the November vote should also be verified by the US Congress which is expected to meet on 6 January.

Therefore, it remains a question, which is not entirely clarified by law, whether the winner would already be considered as “president-elect” after the Electoral College meets or only after he or she is confirmed by Congress.

Congress can reject votes for the candidate in question if he or she has died or been somehow incapacitated. The House of Representatives will then move to decide on the candidate, choosing among those who got the most votes. The House is currently dominated by Democrats, however Republicans hold control of 26 of the 50 state delegations, with each being able to cast one vote towards any of the top three remaining candidates.

But prior to November House of Representatives election, the makeup of the next Congress is also yet unknown.

If any of the candidates dies or becomes severely ill after the results are certified by Congress then the future finally becomes clear – it would be either Vice President Mike Pence or Joe Biden’s running mate Kamala Harris who would be sworn in during the Inauguration, which is expected to take place in Washington DC on 20 January.