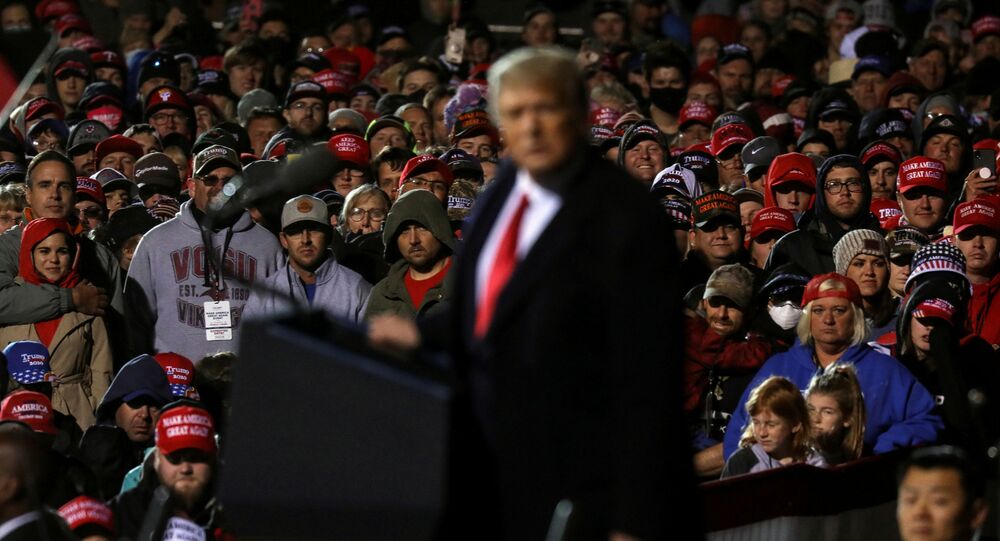 Trump's COVID-19 Diagnosis: How Can it Affect POTUS' Reelection Campaign?

Uncertainty looms over the future of the second debate between President Donald Trump and his rival Joe Biden which is scheduled for 15 October in the wake of POTUS' positive COVID-19 diagnosis. Some analysts have weighed in on how it will affect the ongoing race and how the Trump campaign will act under the new circumstances.

As it is unclear for how long Trump will stay at the Walter Reed National military medical facility, his hospitalization will not harm his re-election bid and chances to stay in the White House for the next four years, believes James Fetzer, Professor Emeritus at the University of Minnesota.

“Assuming he survives intact- which has a probability of around 99.99%, this event should enhance his prospects, where he appears to be headed for a landslide reelection,” the professor argues.

According to Fetzer, the timing for Trump’s contraction with the disease could be “most interesting”, just a month before the November poll and two weeks prior to the next debate with former vice president Joe Biden, and he suggests that “criticism of the President will be muted and sympathy for him will climb.”

For example, when UK Prime Minister Boris Johnson got bedridden with COVID-19 in April, his popularity slightly increased, polling by YouGov recently revealed.

However, Trump's positive test for the coronavirus can also be treated as "a blow" for his re-election campaign, says Dr. Harvey Schantz, professor of political science at State University of New York, as it will allegedely "make it very hard for the Republicans to close the gap with the Democrats in the waning weeks of the campaign."

Trump has already been forced to cancel a campaign event at Orlando Sanford International Airport in Florida on Friday, and will probably not be able to attend other rallies, which remain Republicans' "number one" tactic, the scholar maintains.

"The virus breakout undermines and by necessity shakes up the remainder of the Republican’s campaign by ruling out large campaign rallies, the bread and butter of the Trump campaign, through which the president motivates his supporters, feels the love of the crowd, and projects his message directly to the American people," Dr. Schantz believes.

The same relates to POTUS' fundraisers "which are important to the president for not only the money but for meeting with his most generous supporters, as he did on Thursday, flying to Bedminster, New Jersey," according to the professor.

Dr. Schantz believes that US Vice President Mike Pence will now have to pick up some of the president's  campaigning activities, while his upcoming debate with Kamala Harris next week promises to turn out to be "more important than ever".

Will Trump’s COVID Diagnosis Be Used by His Campaign to Criticise the Economic Lockdown?

Trump’s condition does not only have the potential to increase support for him among uncommitted American voters, but could also be used by his administration as a call to ditch coronavirus restrictions after his immanent rehabilitation, says US investigative journalist Mark Dankof.

“Trump will recover,” Dankof elaborates, noting that the president has a good chance of getting re-elected, even though his diagnosis has already “given CNN and other MSM outlets a good case of histrionics, being heightened to assist the Biden candidacy by ignoring the latter’s dementia.”

© REUTERS / Joshua Roberts
US President Donald Trump disembarks from the Marine One helicopter followed by White House Chief of Staff Mark Meadows as he arrives at Walter Reed National Military Medical Center after the White House announced that he "will be working from the presidential offices at Walter Reed for the next few days" after testing positive for the coronavirus disease (COVID-19), in Bethesda, Maryland, U.S., October 2, 2020

The Other Side of the Pandemic’s ‘Weaponization’

Following Trump’s public acknowledgment that he previously downplayed the coronavirus threat in the US to avoid panic, there is a view that the situation will be used against the president, and that he will be “demonized as reckless,” says American writer E. Michael Jones, an editor of the magazine Culture Wars.

“The main threat to the political process comes from the ongoing weaponization of the pandemic,” the media commentator believes.

As such, “the pundits will say ‘I told you so’ as part of their ongoing war against Trump,” he maintains.

But for Dankof, the United States has too many problems “far more dangerous” than COVID-19, including the shaky position of the US dollar due to quantitative easing, “the overextension of the American military abroad”, the escalating national debt and budget deficits, as well as the ongoing unrest in the country.

“The American Empire is on a respirator,” says journalist. “Unlike Mr. Trump, it will not recover.”