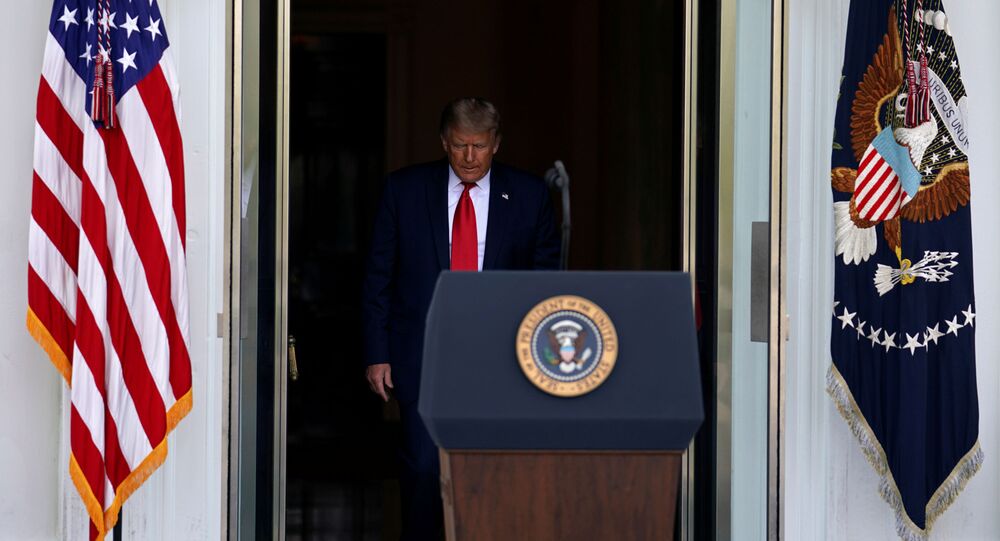 US President Donald Trump's speech was seen by many as an "unprecedented attack" on the US military leadership, while he has been facing allegations that he mocked veterans that died in war - something that he vehemently denied.

During his press conference at the White House on Monday, US President Donald Trump asserted that Pentagon chiefs probably were not "in love with me", accusing the military brass of wanting to do nothing "but fight wars" so that weapon makers "stay happy".

"I'm not saying the military's in love with me. The soldiers are. The top people in the Pentagon probably aren't because they want to do nothing but fight wars so all of those wonderful companies that make the bombs and make the planes and make everything else stay happy", he said during the press briefing.

He went on to say there was "one cold-hearted globalist betrayal after another", championing the withdrawal of American troops from "endless wars" and condemning NATO allies for "ripping us off".

The statement drew mixed reactions, with some lambasting the president for attacking his own administration, and some insisting that the remarks made sense, citing Dwight Eisenhower's warning in 1961 about the threat posed by joint efforts of the US military and the private arms industry.

After fighting a brutal war & then serving eight years as US President, here was Dwight Eisenhower's 1961 warning about the menacing joint power of the US military and the private arms industry. This was before Vietnam, the Reagan Cold War build-up and post-9/11 militarism: pic.twitter.com/IRl8ZTdpIo

President Eisenhower said much the same back in 1961, warning the nation about the Military Industrial Complex.

Eisenhower gave the warning of the military industrial complex.

How does the MIC get a war started?How is it that president after president change, but MIC gets more powerful.Who is advising trump to go into war?

It is a profit machine. I don't like him,but POTUS is right here pic.twitter.com/x4HQlCRBSa

Trump gets it. Eisenhower knew it: "In the councils of government, we must guard against the acquisition of unwarranted influence, whether sought or unsought, by the military-industrial complex. The potential for the disastrous rise of misplaced power exists, and will persist."

​Others, however, criticised Trump's comments, arguing that his message was different from that of Eisenhower's.

Eisenhower was a real leader.
A real President.

Joe Biden is a real leader.
He’ll be a great President.

Trump has none of those characteristics. He is a failure. A LOSER ! pic.twitter.com/5gLGR382r0

Trump doesn't deserve to have his name in the same paragraph as Eisenhower, let alone the same sentence.

​Some netizens argued that Trump seems to be protesting what he himself funded in his budgets.

It's all there in HIS budget, including big increases for overseas war contingencies and all the weapons systems he now seems to be protesting.

General Trump just boasted about increasing the military budget. The man talks out of four corners of his mouth.

​Netizens also did not forget the recent Trump scandal, as allegations arose, sparked by The Atlantic report, that he mocked dead American veterans, denouncing them as "losers" and "suckers" for being killed.

Trump vehemently denied the claims, with his White House staff dismissing them as baseless. During the conference, he again refuted the allegations, noting that "only an animal would say a thing like that".

He knows his mask has come off so to speak with respect to his long-standing secret contempt for the U.S. military and the men and women who serve in it

so Trump insulted the military during a press conference to deny he insults the military.