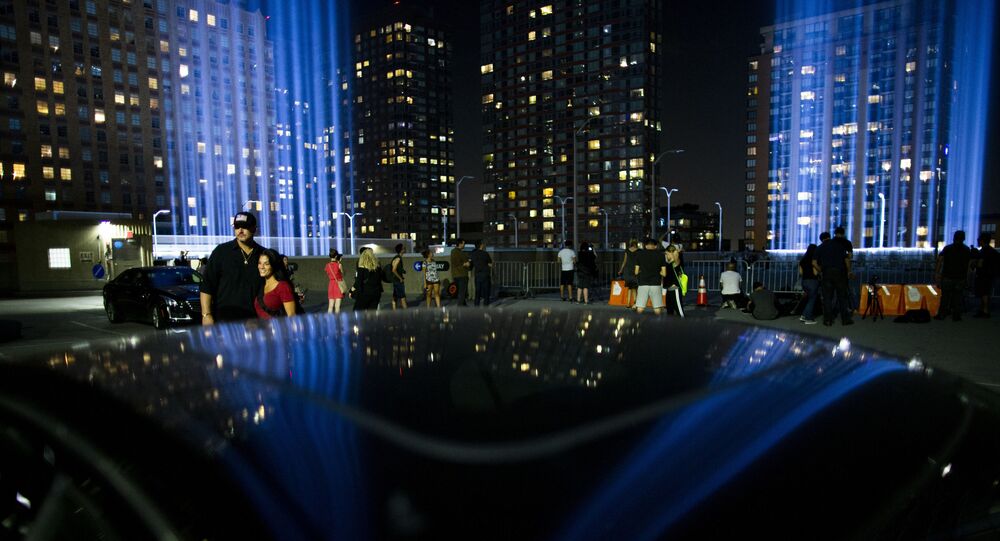 On Thursday, the 9/11 Memorial and Museum in charge of organizing a 'Tribute in Light' memorial display in New York City honoring the victims of the 11 September 2001 terrorist attack announced cancelling the installation over coronavirus (COVID-19)-related concerns, as the US experiences the highest number of infections and deaths in the world.

A 'Tribute in Light' memorial display in New York City honoring the victims of the 11 September 2001 terrorist attacks, which killed nearly 3,000 people, is going to take place, despite earlier plans to cancel the annual installation over coronavirus-related concerns, the 9/11 Memorial and Museum in charge of organizing the display said in a statement on Saturday.

“For the last eight years the 9/11 Memorial & Museum has produced the Tribute in Light and we recognize the profound meaning it has for so many New Yorkers. This year, its message of hope, endurance, and resilience are more important than ever,” said Alice M. Greenwald, the 9/11 Memorial & Museum president & CEO, in a statement on Saturday. “In the last 24 hours we've had conversations with many interested parties and believe we will be able to stage the tribute in a safe and appropriate fashion”.

Greenwald expressed gratitude to the chairman of the 9/11 Memorial & Museum, Mike Bloomberg, NY Governor Andrew Cuomo and the Lower Manhattan Development Corporation for “their assistance in offsetting the increased costs associated with the health and safety considerations around the tribute this year”.

With gratitude to our Chairman Michael Bloomberg and Gov. Andrew M. Cuomo we will be moving forward with Tribute in Light. pic.twitter.com/gxEOvFK8vW

Bloomberg, a former mayor of New York City, said in a Saturday statement that he would be happy to see the Tribute in Light shining this year “as a beacon of our city's resilience”.

“Throughout my tenure as mayor the Tribute in Light was a powerful symbol of New York's recovery after 9/11. I am pleased that once again it will shine this year as a beacon of our city's resilience,” the financier stated.

In the meanwhile, Governor Cuomo stated that commemorating the victims of the 9/11 attack would be “especially important”, as New Yorkers are “once again called upon to face a common enemy” – the COVID-19 pandemic that has killed 23,621 people in the state as of Saturday.

“This year it is especially important that we all appreciate and commemorate 9/11, the lives lost, and the heroism displayed as New Yorkers are once again called upon to face a common enemy. I understand the museum's concern for health and safety and appreciate their reconsideration. The state will provide health personnel to supervise to make sure the event is held safely while at the same time properly honoring 9/11. We will never forget,” the NY governor said.

NYS will provide health personnel & supervision so that @Sept11Memorial can mount the Tribute in Light safely.

I am glad that we can continue this powerful tribute to those we lost on 9/11 and to the heroism of all New Yorkers.

Earlier in the day, Frank Siller, CEO of the Tunnel to Towers Foundation, participating in the commemoration of 9/11 victims, told the ‘Fox & Friends Weekend’ cable television show that the organization would see that the Tribute in Light memorial display was held, despite challenges brought about by the ongoing pandemic.

“I had one retired firefighter that was breaking down on the phone that couldn't believe they were doing it,” said Siller, whose brother, firefighter Stephen Siller, died while saving others during the 9/11 tragedy. “We said, 'wait, wait, wait .. Tunnel to Towers, we got this.' We are going to do it ... We are going to make sure those two big beautiful beams of light, that represent the loss on 9/11 will be shining this year at Ground Zero.”

Siller suggested that “It's not so hard” to ensure the safety of the stagehands and electricians who set up the display.

The Wall Street Journal reported that there would be about 40 workers required to work the event.

Tunnel to Towers will read aloud of the names of the victims, with the participation of the victims’ families, at Liberty and Church streets, the site of the former World Trade Center. The tradition was held there before the 9/11 memorial was constructed.

“We could have literally hundreds of thousands of people march right now because of the protests,” Siller stated. “They are so upset about this. We're not going to do it. We are going to make sure that we have those lights shining so everybody, not just in New York, can see them but around this country and remember those who perished”.

On 11 September 2001, al-Qaeda* terrorists seized four passenger planes, crashing two of them into the World Trade Center in New York and another into the Pentagon. A fourth jet came down in a field in Pennsylvania after initially being directed toward Washington. A reported 2,997 people from 90 countries died as a result of the attacks.