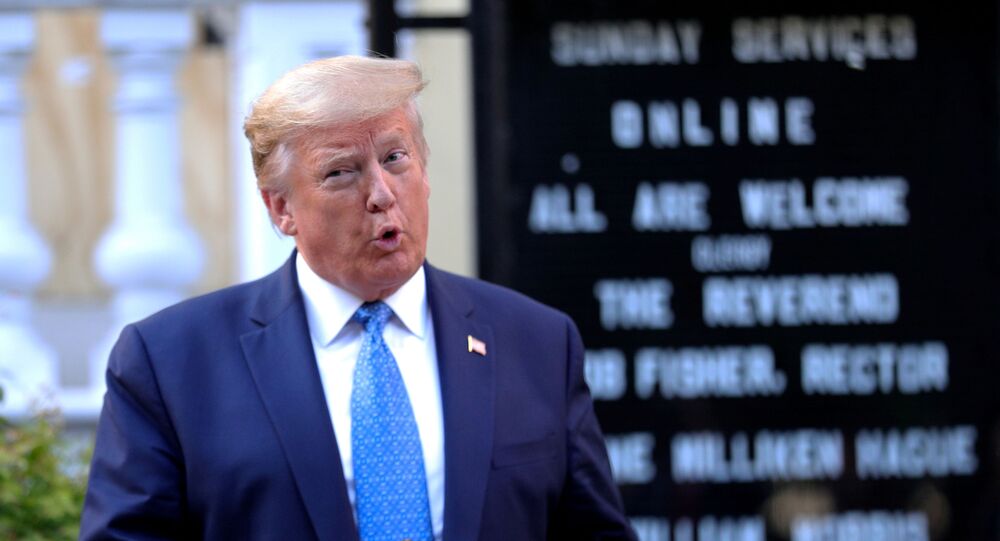 As both violent and peaceful protests have been sweeping across the United States following the death of African-American George Floyd in police custody, reports have emerged that US Secret Services rushed Donald Trump to the White House bunker, fearing for the president’s safety.

Donald Trump slammed “false” news that he had been taken down to an underground bunker on Friday night over Security Service’s fears for his safety as demonstrators moved close to the White House, protesting over the death of George Floyd. The president still confirmed that he was in a bunker, although for a “very, very short period of time” and for a different reason, according to his exclusive interview to Fox Radio host Brian Kilmeade on Wednesday.

“Well, it was a false report. I wasn't down - I went down during the day, and I was there for a tiny little short period of time, and it was much more for an inspection, there was no problem during the day”, the president told Kilmeade when asked to comment on the reports that he has been “brought downstairs” to White House bunker over unrest in the capital.

© REUTERS / Jonathan Ernst
A demonstrator raises his hands as police officers and Washington, DC National Guard military police officers stand guard during a protest against the death in Minneapolis police custody of George Floyd, near the White House, in Washington, U.S., May 30, 2020

The US Commander-in-Chief then explained that he had done similar detours “two or three times” in the past and “all for inspection”.

“Someday you may need it, but you go there and I went down. I looked at it. It was during the day. It was not a problem, and I read about it like a big thing. There was never a problem. We never had a problem,” the president continued.

On Sunday, the New York Times reported that “Secret Service agents abruptly rushed the president to the underground bunker used in the past during terrorist attacks”, concerned for the president’s safety as protesters gathered outside the White House, throwing bottles and bricks. The information was reportedly confirmed to Fox News by a senior administration official and also shared by CNN on Monday. The president, however, slammed reports about the “safety” nature of his purported escape to the underground shelter as “fake news”.

© REUTERS / Jim Bourg
People attend a protest during nationwide unrest following the death in Minneapolis police custody of George Floyd, at Lafayette Park in front of the White House in Washington, U.S., May 31, 2020

“Nobody ever came close to giving us a problem. The Secret Service does an unbelievable job of maintaining control in the White House, and beyond the Secret Service we have a lot of other great people out there, including the DC Police and then, of course, on top of that after I saw the one evening, which was a little rough and it was certainly rough on Leland [Vittert, Fox News’ journalist], I think more so than anybody else. We brought in the - we brought in the troops,” Trump went on.

He noted that the Secret Service agents told him that “it would be a good time” to inspect the White House bunker because he might need it sometime.

© REUTERS / LUCAS JACKSON
Minneapolis is Burning: America's Biggest Riots of the Last Decade — From Ferguson to Charlotte
Donald Trump expressed sympathy over the brutal death of the African-American man, but insisted that law and order should me observed across the country, slamming “thugs” who have been engaged in the destruction of property. The president said on Monday that “thousands and thousands” of military officers should be deployed in Washington DC to address vandalism and looting. Many protests have also gathered next to the White House and, according to Laredo Morning Times, some of these demonstrators were detained by the officers after jumping over barricades near the Treasury Department on Friday.
...
Reddit
Google+
Blogger
Pinterest
StumbleUpon
Telegram
WhatsApp
633
Topic:
Riots Sweep US After Black Man Dies During Police Arrest (129)
Tags:
White House, shelter, bunker, protest, George Floyd, Donald Trump, US
Community standardsDiscussion