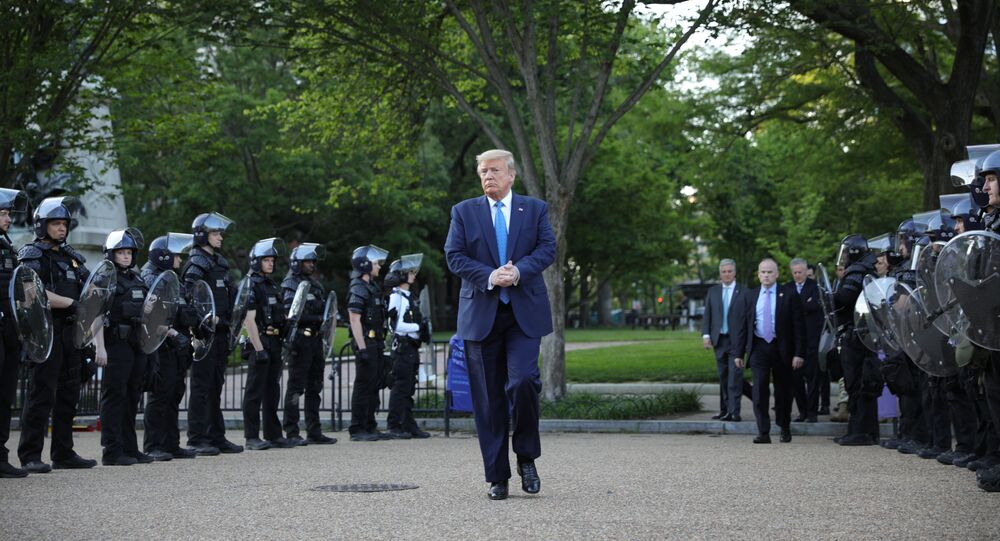 While most of the protests against police brutality and negligence towards those in the black community remained peaceful, some turned violent, with rioters attacking law enforcement, vandalising and looting shops, as well as assaulting ordinary US citizens.

US President Donald Trump has called on police to get "tough" on rioters as he responded to a tweet by a former CIA analyst condemning protesters, who hurled Molotov cocktails at law enforcement officers.

Responding to another tweet by the same analyst regarding a looting spree on New York City's 5th Avenue, which reportedly remained unhindered by the police, Trump wrote that the National Guard is ready, without elaborating on what he meant.

The National Guard is ready! https://t.co/AifVRgWOlM

POTUS previously threatened to deploy the US military in cities that refused to call in the National Guard and failed to quell the violent protests. He vowed to enact the Insurrection Act, allowing the president to deploy troops domestically in order to end widespread public unrest.

Protests and Riots Rock US Cities

Protests began after an African American resident of Minneapolis, George Floyd, died while being arrested by four local police officers. One of the policemen placed his knees on the neck and back of Floyd even as he pleaded for air. After eight minutes of struggling to breathe, Floyd died of asphyxiation.

The protests soon expanded beyond Minneapolis and have been rocking American cities for over a week now. Some of these protests later turned into riots, with participants resorting to vandalism, looting, the arson of private property, violence against ordinary US citizens, and attacks on the police trying to disperse them.

While some governors and mayors decided to call in the National Guard or implement curfews, others decided to limit the response to deploying police. The strict measures have not always achieved their desired result as protests continued in Washington near the White House even as a curfew was introduced and the National Guard deployed.

The response by the police and the National Guard has also not always been proportional. Law enforcement brutally dispersed peaceful protesters from Lafayette Square to clear a path for US President Donald Trump's scandalous photo-op at St. John's Episcopal Church. During these actions Sputnik journalist, Nicole Roussell, was directly shot at with stinger grenades and rubber bullets by police even as she showed her press card and loudly announced that she was a journalist on duty. Roussell sustained seven welts and wounds across her body as a result of the incident.