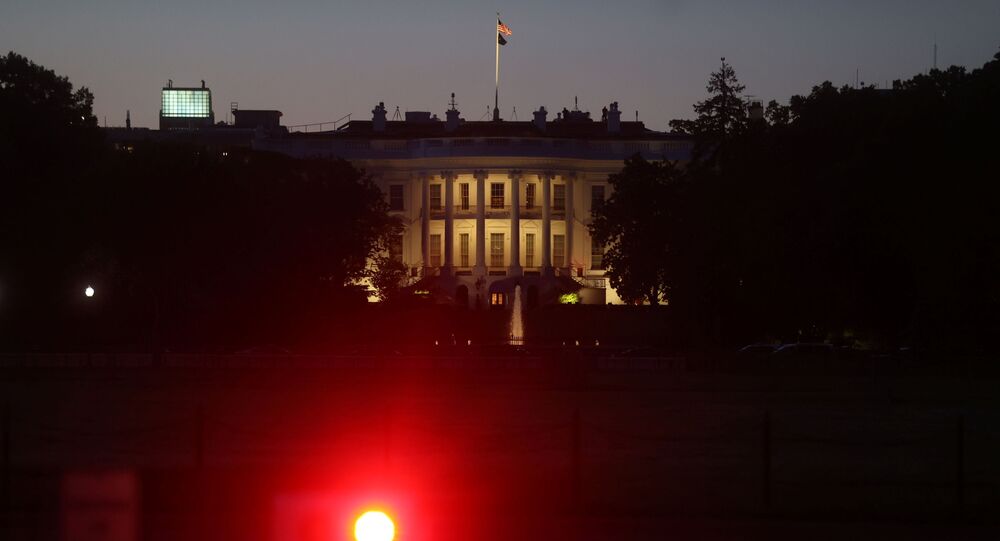 Fires were set near the White House as tensions with police mounted during another night of protests in response to the Minneapolis police killing of an unarmed African American man, George Floyd.

US President Donald Trump was briefly taken to an underground bunker for less than one hour on Friday amid the George Floyd protest in front of the White House, CNN reported on Monday, citing a White House official and a law enforcement source.

According to the publication, First Lady Melania Trump and Barron, their son, were also rushed to the bunker.

A large crowd protesting the death of black man George Floyd gathered near the White House from early Friday evening until late at night on Saturday. Over 60 Secret Service officers and agents were injured this weekend in Washington as protests turned violent.

"It is possible that the president and his family were moved to a secure location in response to the protests. Of course we will not know for sure since the White House may choose not to provide details on presidential security protocol. The White House denial of what might have happened could be for legitimate security reasons or for political purposes. Given Trump’s frequent attacks on the media we simply do not know. Trump may not want to know he was placed in a secure location so as not to look weak to his supporters", David Schultz, a political science professor at Hamline University, says.

Protesters set up fires just blocks away from the presidential residence, and threw water bottles and fireworks at police officers. Several people were injured amid the unrest.

© REUTERS / JONATHAN ERNST
Protesters rally around a bonfire in the midst of protests against the death in Minneapolis police custody of George Floyd near the White House in Washington, U.S. May 31, 2020. Picture taken May 31, 2020.

White House employees were earlier asked to refrain from going to work on Sunday for safety reasons.

"What strikes me more than anything else is not whether the president and his family might have been rushed to a bunker, but that he’s not offered an address to the country to ask for calm and to assure everyone that necessary change is on the way. Consider what George Bush did on Sept. 11, 2001. After intricate security precautions were used to get him from Florida back to Washington, he delivered a short speech to the country that evening. Sure, these two situations don’t perfectly align; however, American history tells us that when the country is in despair, the president speaks to us. Donald Trump hasn’t", Dr. Anthony Moretti, Department Head for Communication at Robert Morris University, opines.

Donald Trump has yet to comment on these reports, however, he previously lashed out at CNN, the New York Times, and the Washington Post for spreading "disinformation".

Much more “disinformation” coming out of CNN, MSDNC, @nytimes and @washingtonpost, by far, than coming out of any foreign country, even combined. Fake News is the Enemy of the People!

Demonstrations have continued across the United States for several days in a row despite the mobilisation of National Guard troops and curfews having been imposed in multiple cities. The Sunday evening protest in the US capital appears to be the largest George Floyd gathering in DC.