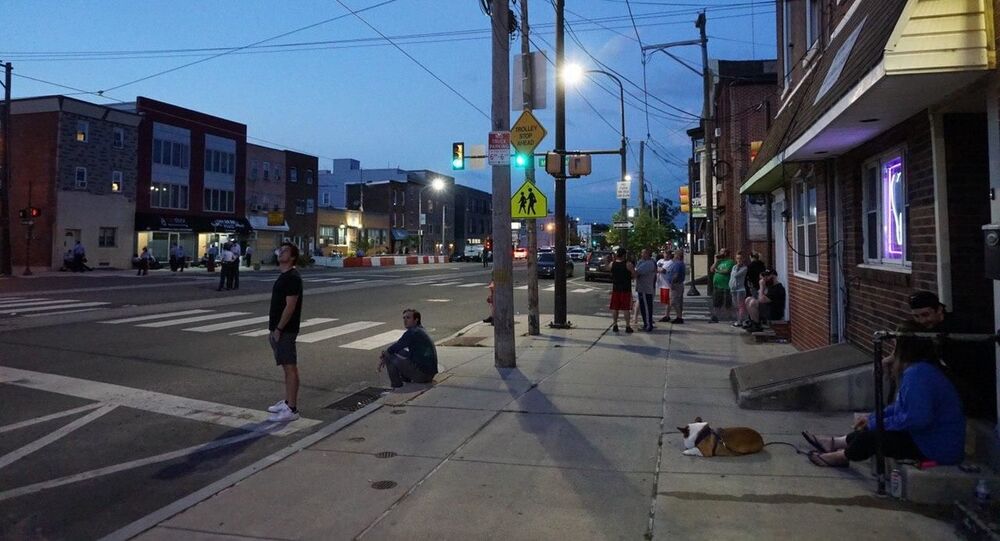 PHILADELPHIA (Sputnik) - As crowds of anti-racism protesters were approaching Fishtown earlier this week, the hardened men of the old working-class district of Philadelphia took to the streets with bats and pipes determined to defend their property from pillaging and arson that marked the nationwide movement for racial equality.

The following day, Tuesday, Fishtowners found themselves vilified on social media and condemned by city authorities as lawless vigilantes.

Though there are no records of physical violence, some protesters complain that they felt intimidated while marching through the neighborhood of modest-looking red brick houses, small stores and workshops.

However, the locals flatly reject accusations of “white supremacy” sentiment and argue that ten law-enforcement officers they were left with that night were hardly enough to protect their own police precinct, let alone the whole of Fishtown.

“Fishtowners were here for one reason and one reason only - to protect houses, businesses and the 26th police department. We heard that they were coming to burn the police district down,” a stocky, short haired local told Sputnik. “It might not look right with the bats and the pipes but you don’t know what the outcome would have been. We don’t want to get up tomorrow morning and clean up glass and broken car windows.”

The white Fishtowner preferred not to be named as he spoke to Sputnik in front of his house close to the main street, his wife and small daughter watching TV inside. The man, who was also part of community self-defence, is frustrated with a public outcry, negative media coverage and reprimands from the municipality.

“That night there was not one clash, not one issue,” he insisted. “No one got robbed, no windows got broken, no businesses got broken into. Plain and simple.”

The Fishtowners were mobilized by the wave of nationwide protests that were sparked last week after George Floyd, a 46-year old African American man, died in police custody in Minneapolis, Minnesota. Video was captured of a white police officer kneeling on Floyd's neck for nearly nine minutes before he died. The officer, Derek Chauvin, has been arrested and charged with murder.

A local Philadelphia TV station interviewed two young white girls, who said that passing by club-wielding Fishtowners felt “very aggressive and very much like they are trying to start something more than trying to protect something.”

Philadelphia Mayor Jim Kenney said that Fishtowners’ actions “were antagonistic and made the bad situation worse.”

“Armed vigilantism will not be tolerated moving forward,” Kenney warned in televised remarks.

Philadelphia Police Commissioner, Danielle Outlaw, acknowledged that every person has a right “to defend themselves and protect their property,” but said she does not “endorse or condone any form of vigilante justice or taking the law in one’s own hands.”

© Sputnik / Artur Gabdrahmanov
Dozens of police vehicles on a street in the Fishtown neighborhood of Philadelphia, Pennsylvania, United States.

The mayor said he was disturbed by reports that some of the police officers on the scene were not only allowing Fishtowners to gather but “were seen high-fiving and taking photos with them.”

“I am glad that the police eventually moved into to disperse the group, but I am not happy about how long it took. We tolerated it last night for too long and that was a mistake,” Kenney added.

Self-defence is acceptable as long as it is “peaceful, non-threatening and non-confrontational,” the mayor said.

Philadelphia, like many US localities, is challenged to differentiate between peaceful demonstrators and the radical minority trying to highjack the nationwide protests over Floyd's death.

Another Fishtowners says they have no problem with protesting as long as they do not use it as an excuse to loot.

Accusations of racism, however, baffle Fishtowners the most.

“There is no white supremacy in Fishtown, there are whites, Chinese, Afro-Americans, Spanish. They all live in Fishtown. Everybody is a neighbor here and we protect each other,” another local said, adding that he is of both Irish and Spanish decent.

Another night and Fishtowners are out again. Some in pajamas, some with kids, some with little dogs, they look relaxed under the protection of 150 policemen, patrolling the neighborhood on bikes and strategically positioning their vehicles at the entrances.

Mindful that he speaks to a foreign media outlet, the Fishtowner sees fit to praise the United States all grievances notwithstanding.

“I think this country [US] is still good. When you see third-world countries, when they do this... they just bring the gun out and start shooting,” he said.