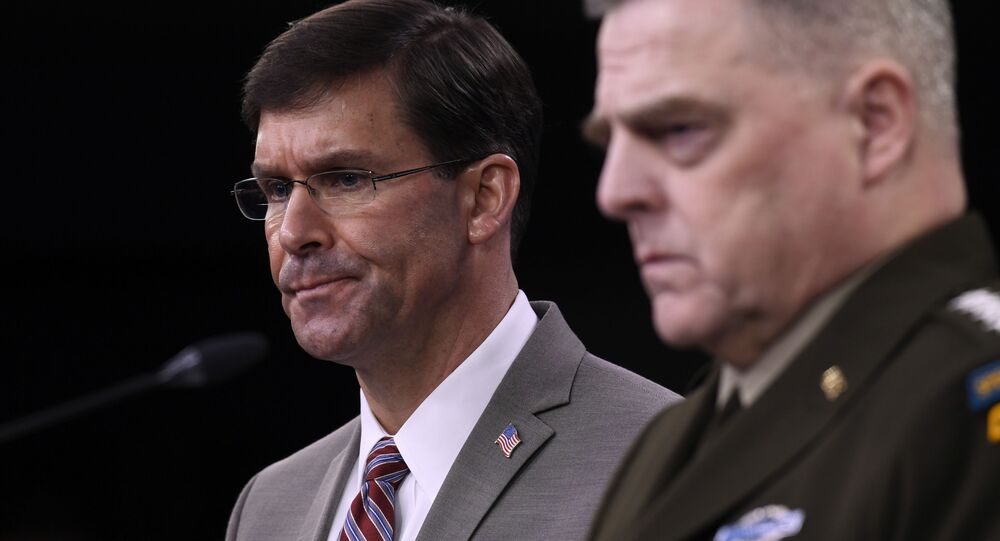 On Monday, US President Donald Trump announced that he would deploy US military assets to states that do not use the National Guard in sufficient numbers to “dominate the streets” amid ongoing mass protests across the country triggered by the killing of African-American George Floyd at the hands of white policemen in Minneapolis in late May.

The US House of Representatives’ Armed Services Committee is in talks with the Defence Department in a bid to arrange for Defence Secretary Mark Esper and Joint Chiefs of Staff Chairman Gen. Mark Milley to give testimony next week on President Donald Trump’s warning that he would deploy the military to quell the ongoing protests across the country, Axios reported on Wednesday, citing unnamed sources familiar with the matter.

“The department has acknowledged the request, but details are still to be determined, including the date,” one source familiar with the conversations said, cited by the outlet.

The department did not decide whether Esper and Milley would testify before the committee. It’s also not clear whether the White House will permit the testimony of two Pentagon top officials to take place in Congress, according to Axios.

“Generally, the committee is insulated from some of the more partisan politicking that happens. So I don't think that there would be the same type of complete stonewalling,” another source reportedly said. “That said, it would not shock me if the department came back and said they would send other senior ranking officials, but not necessarily the Sec Def and the chairman of the Joint Chiefs”.

According to the outlet, a defence official said that the secretary and the Joint Chiefs chairman “aren’t eager” to testify and a justification for the action has not taken place.

Earlier in the day, Esper stated at a press briefing that he does not support Trump's threat of using the 1807 Insurrection Act to deploy military forces in American cities to quell the ongoing protests, sparked by the death of African-American George Floyd. The Pentagon chief said that active-duty troops “should only be used as a matter of last resort”, when nothing else can help. Esper added that the US is currently not in such a desperate situation.

Following Esper's statement, White House Press Secretary Kayleigh McEnany said that Esper continues to serve as a Defence Secretary and that “if he [Trump] loses confidence in Secretary Esper, I'm sure you all will be the first to know [...] should the president lose faith, we will all learn about that in the future”.

On Monday, Trump threatened to mobilise all available federal resources, including deploying thousands of armed troops, to respond to ongoing demonstrations over the killing of George Floyd.

Following the Trump announcement, House Armed Services Committee Chairman Adam Smith called on Esper and Milley to testify on the POTUS threat and explain to the public the domestic engagement of military troops.

“I have serious concerns about using military forces to respond to protesters. The role of the US military in domestic US law enforcement is limited by law. It must not be used in violation of those limits and I see little evidence that President Trump understands this fundamental premise,” Smith said in a statement.

Over a dozen US states have seen a mobilization of National Guard troops to disperse protesters. Earlier in the week, the Pentagon moved some 1,600 troops to the DC region to assist police forces in quelling protests in the nation's capitol. In addition, a curfew has been imposed in Washington and many other US cities.

'We Can Unite Without Him': Former Defense Secretary Slams Trump as Threat to US Constitution