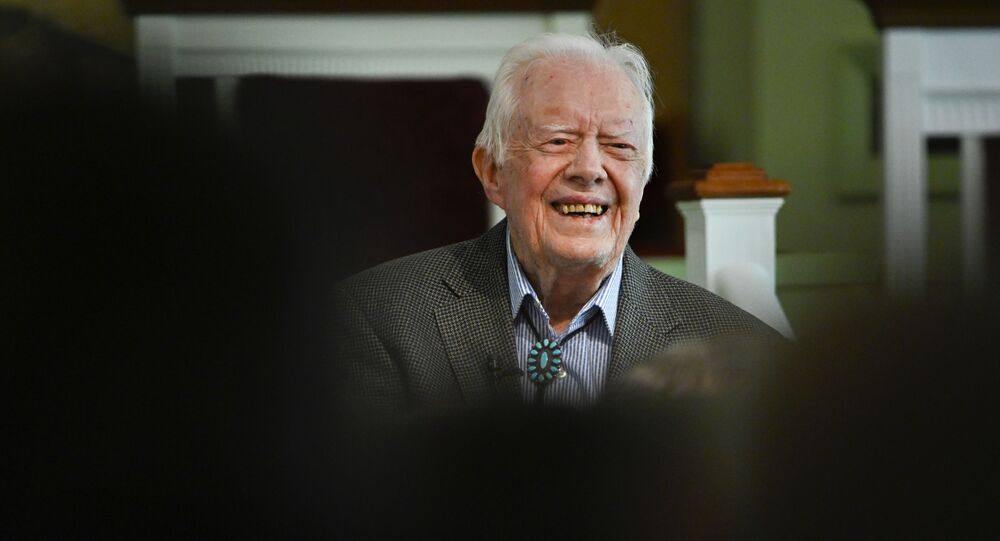 The killing of an African-American man from Minneapolis named George Floyd by white policemen at the end of May triggered massive nationwide demonstrations across every state and almost every major city in the United States, with some of those protests turning into violence from both demonstrators and law enforcement.

Former US President Jimmy Carter said in a statement on Wednesday that he, along with the former US First Lady Rosalynn Carter, are “pained by the tragic racial injustices” in the country and the consequent backlash triggered by the killing of African American George Floyd by white Minneapolis policemen.

“Rosalynn and I are pained by the tragic racial injustices and consequent backlash across our nation in recent weeks,” Carter said. “Our hearts are with the victims’ families and all who feel hopeless in the face of pervasive racial discrimination and outright cruelty”.

Carter’s remarks come as all other living US presidents officially weighed in on the ongoing protests across the country.

The former president called on Americans to “shine a spotlight on the immorality of racial discrimination”, highlighting that violence, no matter whether it is “spontaneous or consciously incited”, is not a solution for the ongoing crisis in the country.

Carter said, “As a white male of the South,” he acknowledges very well “the impact of segregation and injustice to African Americans”, adding that it was his responsibility as a politician “to bring equity to my state and our country”.

“In my 1971 inaugural address as Georgia’s governor, I said: 'The time for racial discrimination is over.' With great sorrow and disappointment, I repeat those words today, nearly five decades later,” Carter noted. “Dehumanizing people debases us all; humanity is beautifully and almost infinitely diverse. The bonds of our common humanity must overcome the divisiveness of our fears and prejudices”.

Carter, who served as US president from 1977 to 1981, noted that “silence can be as deadly as violence”, calling on “people of power, privilege, and moral consciences” to say “no more” and take a stand against a “racially discriminatory police and justice system, immoral economic disparities between whites and blacks, and government actions that undermine our unified democracy”.

“We are responsible for creating a world of peace and equality for ourselves and future generations,” the former leader stated, adding, “We need a government as good as its people, and we are better than this”.

On 25 May, an African-American resident of Minneapolis named George Floyd was killed by white police officers, one of whom knelt on the victim’s neck for over 8 minutes until he lost his life.

Since then, every state and almost every US city has suffered from demonstrations and protests against police brutality that often turn violent due to a massive and aggressive police presence.